Show attendees have the opportunity to see some of the world’s most beautiful and valuable coins, paper money and related numismatic treasures not seen anywhere else. The Museum Showcase features rare and historic items from the ANA’s Money Museum and items generously lent to the ANA from private collections. 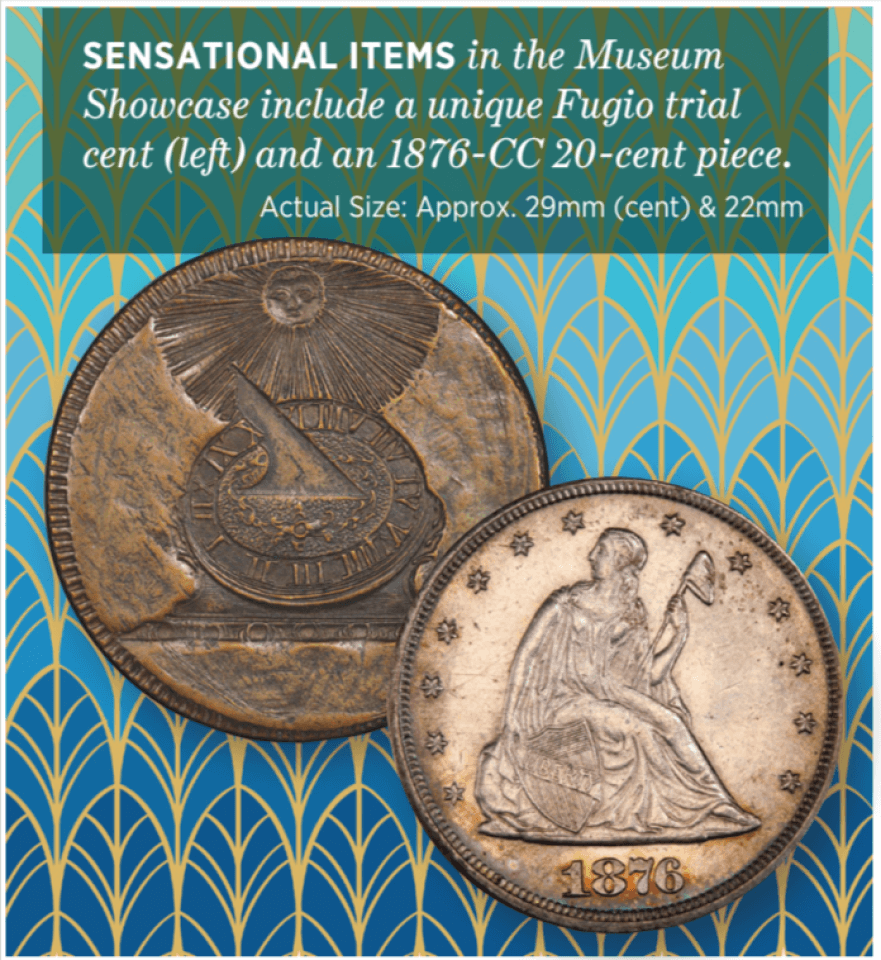 The earliest pattern for a circulating U.S. coin—the unique American Congress Pattern Fugio Hub Trial— will be on public display for the first time ever, courtesy of David McCarthy. The trial piece, which was struck in early 1787, is graded Mint State (MS)-62 by Professional Coin Grading Service (PCGS) and offers historians a glimpse of the earliest design for a U.S. cent.

When the U.S. Mint introduced the 20-cent piece in 1875, the new denomination created confusion because it was similar in size and appearance to the Seated Liberty quarter. Mintages were reduced drastically in 1876, and only proof coins were struck in 1877-78. This display from the Black Cat Collection courtesy of Legend Numismatics features the top two PCGS registry sets of proof and regular issue 20-cent coins, including the extremely rare 1875-S BM Cameo (one of two known) and the 1876- CC (graded MS-64 by PCGS).

One of the five known 1913 Liberty Head nickels made under mysterious circumstances at the Philadelphia Mint and insured now for $3 million.

The "King of U.S. Coins", insured for $4 million, is among the most coveted of all U.S. rare coins, with only 15 known examples.

The United States Mint began operations in 1792 with experimental strikes of a limited number of coins.  It did not issue a full range of authorized denominations until 1796 – the year the first dimes were put into circulation.  This display features three 1796 and 1797 dimes showing the small eagle variety issued only in those two years – thus representing the first regular-issue dimes of the United States.

Visitors can also see for the first time in Atlanta a unique World War II era Lincoln cent made in 1943 of bronze alloy, rather than zinc-coated steel to conserve copper, that sold for more than $1 million two years ago.

Though not as well known, 1944 steel cents errors are also quite rare with perhaps 35 examples in existence from all mints.

This showcase offers a selection of incredible printing errors in the ANA’s signature Bebee Collection of U.S. Paper Money. As notes are produced, a variety of mistakes can occur, among them double denominations, improper alignment, inverted backs, seal overprints, and misaligned or missing serial numbers.

The Baker-Manley collection of Washington-related medals is the ultimate grouping of numismatic Washingtonia not only for its quality and size (over 950 pieces) but for its provenance – the core of this collection was formed by William Spohn Baker (1824-1897), the first numismatic researcher to compile a comprehensive catalog of medals related to George Washington.  Make sure to view this exhibit featuring highlights from this important collection donated by ANA benefactor and life member, Dwight N. Manley.