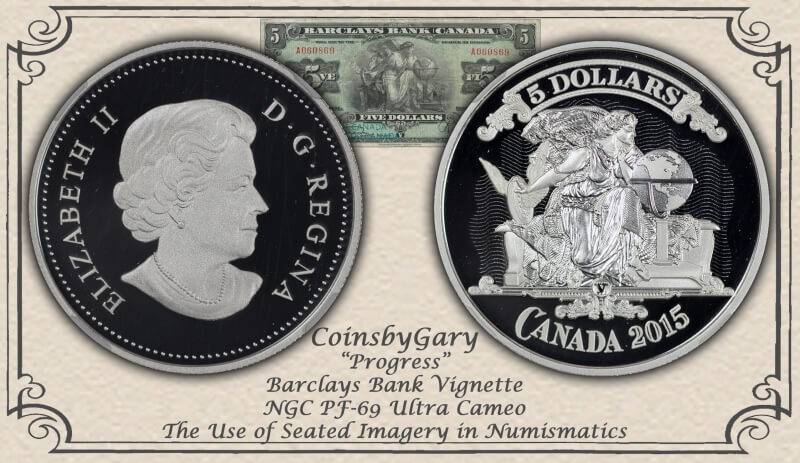 This is exactly the question I am asking of myself as I examine the state of my collection. More specifically, which coins in my collection represent my core passion as opposed to those I bought on a whim? If I were to be honest with myself, I’d have to admit that there are currently a number of coins in my collection that I bought impulsively. It is those coins that effectively blur my profile. Furthermore, they are a distraction which causes me to lose focus and needlessly spend money.

One of the first things a person must do before they start buying coins is to determine what coins they’d like to collect. Potential collectible coins may include US coins, world coins, type coins, series, moderns, classics, die varieties, error coins, tokens, medals, etc. IMHO a collection of coins needs to have purpose and order. Furthermore, the individual collector needs to become an expert on those coins he or she wants to collect. Developing my collector profile has helped me to bring purpose and order to my collection.

For me I love type collecting, theme-based collecting, pedigrees, allegorical coins, premium-quality coins, sentimental coins, and coins with a story. At the core of the aforementioned list is variety. Theme-based sets stand on their own no matter if that set has two coins or a hundred. However, they are also open-ended. For instance, I will never run out of possible additions to my seated imagery set, yet if I never add another coin, it stands complete. Open-endedness also insures that I probably won’t get bored with the set.

Type sets bring a lot of variety to coin collecting, such as coins of a specific denomination, century, mint, or base metal. Allegorical images add mystery to a coin and oftentimes the allegories on coins link them with specific places and periods in history. As a person interested in history this aspect of coinage fascinates me. Coins with pedigrees such as hoards and shipwrecks come with separate storylines all their own. Premium-quality coins are aesthetically pleasing to look at and I am determined to buy the best coin, within the best grade I can afford. In a nutshell this is my collector profile. This brings me describe a few coins from my collection to which I either yielded to the numismatic hype or bought on an impulse.

In the fall of 2011 the Mint released the five-coin 25th anniversary Silver American Eagle set and I ordered a set directly from the Mint. Then I had it graded as a set by NGC. However, I also remember the feeling of possibly being left out had I not ordered the set. Consequently, I momentarily lost sight of my collector profile. As it stands, since the SAE anniversary coins don't fit into my collection as either type or theme-based coins I should not have bought them at all. Now I’m probably going to sell the set at a slight profit and spend the proceeds on a profile coin. On another occasion, my daughter bought me the two-coin West Point SAE set as a birthday present that I will probably keep for sentimental reasons.

Morgan Dollars became attractive to me because they offer a multitude of sub-set type options. First, some of them were minted at obsolete mint facilities such as New Orleans and Carson City. Next, many of the Carson City dollars have the GSA hoard pedigree. Additionally, the Redfield hoard adds a different twist to a vastly popular collector series. Morgan Dollars also have some of the best examples of toning in numismatics, thus satisfying my profile by being aesthetically pleasing. Finally, since many of the Morgan Dollars didn’t circulate, I even started a theme-based set based on MS-65 and 66 examples with an average cost of $200 or less.

I started collecting Morgan Dollars in 2010 with a type set based on toners and the New Orleans Mint after which I decided to complete the entire business-strike series as soon as I determined that it was doable for me. Thus for three years I bought Morgans with a vengeance, even adding a VG10, 1893-S to my collection. About two years ago I decided to take a break and hadn’t bought but a handful of Morgans since. Now I wonder if the number of sub-types in this series somehow clouded my profile, especially since I don’t have a passion for series collecting. For now I will be thinking long and hard before I sell off my Morgans, considering that if I start down that road there will be no turning back.

In summary, it is a good thing for me to periodically audit my collection based on my profile because it keeps me disciplined and my collection from getting cluttered.

This all brings me to the latest addition to my 7070 type set that perfectly fits my profile. That coin is a PF-62 Cameo, 1863 Civil War era quarter with aesthetically pleasing light golden toning, distinct cameo devices, and a strong strike. Additionally, I have added three new coins to my theme-based seated-imagery set. And finally, I encourage all of you to stayed focused on the coins that fit your profiles, whatever those coins may be.

those are reaally nice coins and great article!

AMAZING BLOG! YOU HAVE ME TAKING A LOOK AT MY OWN PROFILE AND FOCUS!!! THANKS YOU FOR THE BLOG, WE NEEDED IT!!!

I enjoined reading your post. I think you make a good point of identifying your collectors profile. I've recently found in my own profile (not that I thought of it that way at the time) that my passion is with nickels, primarily the liberty and buffalo series along with Indian head cents. A few years ago I started to collect Morgan Dollars and made it a point as I would go to local coin shows to try to get at least one Morgan to add to my collection. I can't put a finger on what changed, but after about a year my enthusiasm for looking for Morgans tapered off and I found myself almost unknowingly looking to continue adding to or upgrading my nickels and IHC collections. I do still look at Morgans as I walk a show and am certainly liable to buy something on a whim that I find interesting or feel I have found value, but I KNOW that at least for now, I am a nickel guy!

I love Type Collecting, but I LOVE collecting nickels; however, after all these years of copper and nickel, I am thirsty for silver.

You got some pretty cool coins friend.

Well what can I say that I haven't said. You are a terrific collector and you know your coins. I enjoy everyone of your blogs.

It seems like I am constantly scolding myself for buying outside of my main collection profile. It's tough to tell yourself no when a coin speaks to you. Hopefully I am getting better.

I have never thought about "my collection profile" but I have thought about "my collection focus." I have been collecting coins for 55 years. My Dad tought me focus from the beginning. He collected Indian Head Cents and he got me started on Wheaties back them. We both helped each other on our collections. He allowed other coins but they had to "have a story." Sometimes it was a numismatic story or sometimes it was a personal story. My Dad is gone now. I still have his Indian Head collection and I still add and upgrade it. I still have the Wheates collection too. Over the years I have added other interests to what collections I have. But I still think about "my focus" and "coins that have stories." Thanks for the posting.