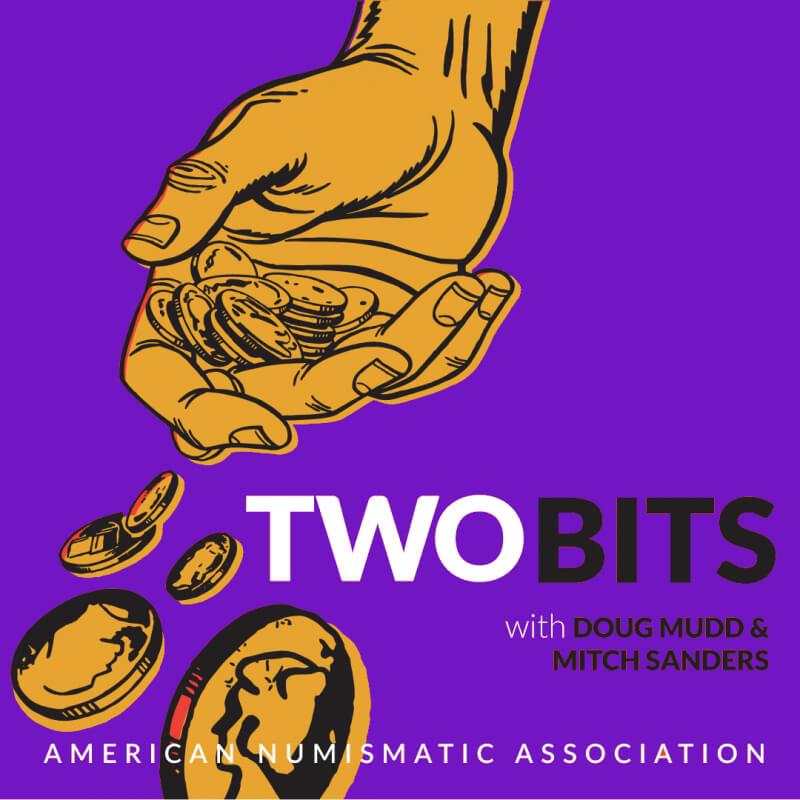 Do you have any questions, suggestions, or comments for Doug & Mitch?  Click here to get in touch!

Welcome to Two Bits, the American Numismatic Association’s podcast about the wonderful world of coins and paper currency. Enjoy wide-ranging discussions about numismatics, in a fun and engaging way.

Host Doug Mudd has collected since the age of 10 and is currently interested in ancients, modern paper money, WWI and pre-19th century medals and coins. He was Collection Manager for the Smithsonian Institution’s National Numismatic Collection from 1991 to 2004 and has been the curator of the ANA’s Money Museum since 2004. Author of numerous numismatic lectures, exhibits and publications, he writes a regular column for The Numismatist and has been an ANA Summer Seminar instructor since 2002. He is also the author of the NLG award winning book All the Money in the World printed in 2006 by Harper Collins as part of Smithsonian books.

Host Mitch Sanders is the author of the column "Getting Started" in the ANA's Numismatist magazine. A lifelong collector, his numismatic interests range from popular collectibles like Mercury dimes and Franklin halves to more esoteric items including Canadian Chartered banknotes and Swedish plate money. From 2003 to 2010, he served as a representative of the general public on the Citizens Coinage Advisory Committee, and was committee chair from 2005 to 2009.

Join Doug and Mitch as they discuss a coin that has been touched by so many people since 1959: the Lincoln Memorial Cent. They describe the artistry of the coin (and the Memorial itself), varieties in the series, and the details of changes in the coin's composition. Find out how this classic coin has rolled with the changes!

Join Doug and Mitch as they kick off Season 2 of Two Bits with a discussion of the coin that started so many numismatists on their hobby journey:  the Lincoln Cent.  They explain the coin’s historical origins, the controversy and jealousy that accompanied its debut, and the coveted mistakes that are part of the series.  Find out why the humble cent is such a compelling collectible!

Join Doug and Mitch for Part 2 of their numismatic literature roundup as they discuss more favorite works from overviews to deep dives.  Find out how these great books can inform and inspire your collecting pursuits! Books discussed include:

Ancient Coin Collecting (Volumes I to VI) by Wayne Sayles

Coins of the World by R.A.G. Carson

Listen to Season One; Episode 11

Join Doug and Mitch as they discuss some contemporary and classic works of numismatic literature, with subjects ranging from compelling moments in American history to the vast array of worldwide issues.  Find out why Doug's book is one of Mitch's favorites! Books discussed include:

All The Money In The World by Doug Mudd

The Early Paper Money of America by Eric P. Newman

In God We Trust by William Bierly

Season One; Episode 9: Saint-Gaudens and the Renaissance of American Coinage

Join Doug and Mitch as they discuss Augustus Saint-Gaudens and his gold double eagle.  They describe his monumental sculptural work, his vital role in the Renaissance of American Coinage, and the challenges involved in making his coins a reality.  Find out how the determination of Theodore Roosevelt and the artistry of Augustus Saint-Gaudens combined to create an American masterpiece!

Listen to Season One; Episode 9

Join Doug and Mitch for the latest episode of Two Bits and their first celebrity interview.  Follow their conversation with Ken Bressett about his long career in the hobby, including his role as editor of the "Red Book," his many publications and his unexpected adventures, including numismatic scuba diving! Find out how a flavored beverage launched the collecting pursuits of one of the best-known numismatists of our time!

Listen to Season One; Episode 8

Join Doug and Mitch as they discuss the history, economics, and artistry of coinage in the Greek world. They also offer suggestions for starting an affordable collection of these ancient artifacts, and review some recommended reference works. Find out why ancient Greek coins are still fascinating after 2,500 years!

Listen to Season One; Episode 7

Season One; Episode 6: The Dawn of Coinage

Join Doug and Mitch as they delve into the origins of coinage of the ancient world. They discuss the challenges of the barter system, the spread of metallic standards, and the invention of coinage as we know it. Find out why it's easier to make change for a coin than for a cow!

Listen to Season One; Episode 6

Season One; Episode 5: History of Morgan and Peace Dollars

Join Doug and Mitch for a discussion that ranges from the silver mines of the Old West to the halls of government in Washington DC and beyond (including the land of Oz), recounting the economic and political forces behind Morgan and Peace Dollars. Find out about all of the historical twists and turns involving these popular collectibles!

Listen to Season One; Episode 5

Join Doug and Mitch as they rank the five most impressive items on display at the Money Museum, with extensive commentary about the pieces and their stories. There’s even a surprise twist at the end. Find out about the very best that the ANA’s world-class museum has to offer!

Listen to Season One; Episode 4: The Top Two "Wow" Coins

More about the Money Museum:

Items discussed (in chronological order by date of issue):

In this episode of Two Bits, Doug and Mitch discuss some of the many excellent options available for numismatic reading.  They introduce the extensive online research tools of the Newman Numismatic Portal and The Numismatist Digital Archives, and they recommend some recent printed books that are likely to interest collectors.  Find out about the latest and greatest in the world of numismatic literature!

Listen to Season One; Episode 2

Resources discussed in this episode:

Season One; Episode 1: Numismatics in a Time of Social Isolation

In the inaugural episode of Two Bits, hosts Doug Mudd and Mitch Sanders discuss collecting during the isolation of the COVID 19 crisis. They explore the virtues of virtual meetings, online museum exhibits, and numisma-tourism, along with other online resources and research tools. Find out how to get your numismatic fix, despite staying at home!

Listen to Season One; Episode 1

Resources discussed in this episode: