This 1943 Lincoln cent is one of the finest-known examples, graded Mint State 63 Red (MS63RD) by PCGS and certified by CAC with a green label. Bronze cents dated 1943 have been famous since one was first discovered in 1944. While they look like regular-issue cents of any other year, they are incredibly rare. Popularly called “copper pennies,” these cents are actually error coins — they were never intended to be struck! All cents that year were supposed to be made from zinccoated steel planchets. The error was created when leftover planchets from 1942 production were mixed in with the intended planchets for 1943.

Over the last eight decades these coins have regularly appeared in the press — each time triggering nationwide searches for the next 1943 copper cent. Almost all new “discoveries” turn out to be counterfeits or cases of mistaken identity. This example was discovered by a collector as they searched through rolls of old cents and kept for decades in their collection, which was passed down in the family until it was revealed to the numismatic hobby in 2013. This coin is unique as it is the only 1943 Cent that has been given the “Red” designation by any grading service, which is why it was purchased for over $1 million in 2017.

Bronze 1943 cents are highly ranked in listings of regular U.S. coins and error coins. Their fame has resulted in being listed both in 100 Greatest U.S. Error Coins by Nicholas P. Brown, David J. Camire and Fred Weinberg (2010), where it occupies the Number 4 position, and in 100 Greatest U.S. Coins by Jeff Garrett and Ron Guth (2014), where it is listed as Number 11. One of approximately 15 examples known, this coin is part of “The Dazzling Rarities Collection.”

The 1943 “copper pennies” have appeared in a vast array of magazine, comic book and popular press advertisements for decades. These ads enticed readers to buy coin catalogs with headlines such as “$10,000 Reward for This Penny!” or “I’ll Pay You $9,785.01 for This Penny!” during the 1960s and 1970s. Some companies took genuine 1943 zinc-coated steel cents and copper-plated them to sell for 69 cents each as novelty items: “Fool Your Friends! 1943 Copper Cents! The Penny That Never Was!” 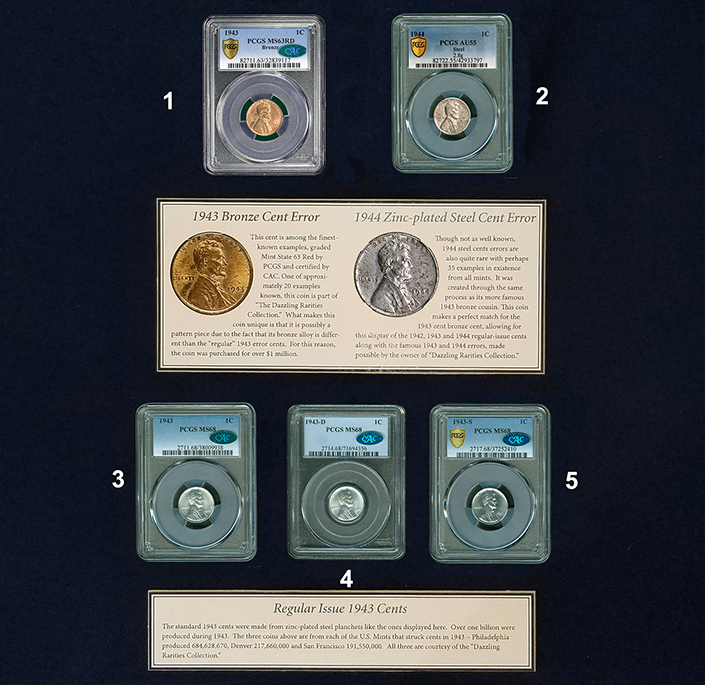