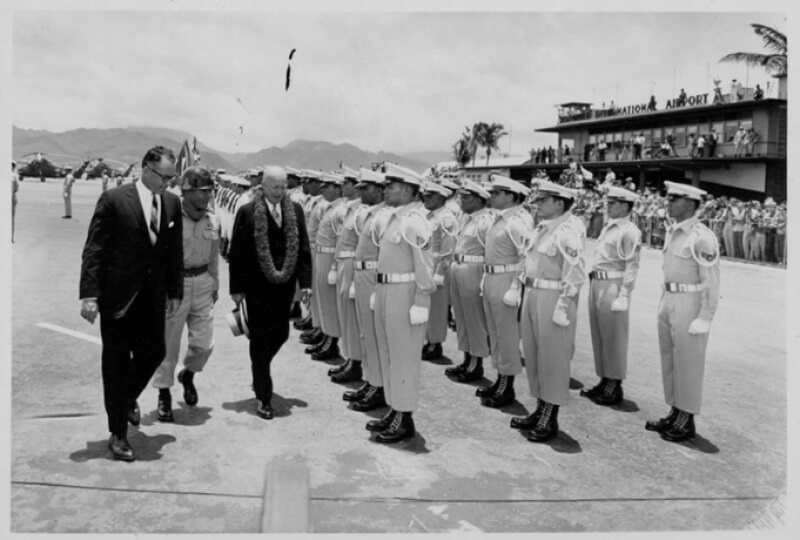 12 Mar 2018
President Eisenhower awarded/gifted a special Government medal (sGm)  during his visit to Hawaii from June 20-25, 1960. My research has shown that:

1. Only 400 medals were struck by the Philadelphia Mint.
2. The medal was designed by Frank Gasparro.
3. The medal is the first U.S. Mint product to bear the design element for the State of Hawaii (not to be confused with the Kingdom of Hawaii or the Territory of Hawaii).
4. Only 267 survived and are available to collectors.

The images and newspaper documents President Eisenhower's visit to the State of Hawaii. The medal is in my collection.

There is a another interesting story about the cancelled Alaska medal...It would have been nice to have a sGm that represented the 49th state (of which President Eisenhower also visited earlier on June 12-13, 1960 and signed into law the establishment of the 49th state.

Loved these photo's! Great blog and Medals! Thanks for all of your research!

Nice medal. Great research work and photos. I enjoy seeing what is going on in the background of the photos and the equipment of the time. Thanks Doc..

Great History! Thanks for sharing your research on these special medals.

Very interesting a President of these United States has some medals made for something that was important to our history and there's a conspiracy. I'm sorry but I don't see it or get it. It's been done for centuries Monarchs giving gifts to other countries and it will never stop. These are historical events. I appreciate your research but I really don't see anything here. I have read them all and do not see anything that is breaking the law. Items are made for various celebrations to remember. For people who gave there lives for our freedom that work in different government agencies. I don't see a thing wrong but I think it's great. It gives comfort to a family. And they get a medal to remember his or her valor. Keep looking i will keep writing. I hope you understand my point. Thanks Mike.

No conspiracy intended. If you notice the content from my current and previous blog entries, they are not regurgitation of already documented or known information. Hence, the overall theme of each of my blog entries is to share new knowledge. Simply said, new knowledge will make the hobby grow and I hope my blog entries are helping. As for the POTUS sGm, these are excerpts from the introduction of an article I wrote: "A career highlight envied by many is the receiving of a special medal from the President of the United States in a gesture of presidential recognition and appreciation. " "A few dealers expanded this presidential lore by studying the visual commonalities and differences in the design elements of these special medals, then voiced their numismatic opinion. As a direct result, these once cherished special medals are now without proper numismatic identification, lack historical relevancy, and treated without due regard. " "This research effort established the numismatic identity, historical relevancy, and proper regard as true-to-life presidential artifacts for the President of the United States special Government medal series." My main point is that POTUS sGms are extraordinary numismatic items: (1) Tied to US history (2) Awarded/gifted by a sitting US President (3) Design elements show presidential ownership (4) Provenance (chain of ownership) can be documented if one makes the effort when purchasing the sGm. To the best of my knowledge, the POTUS sGm series is the only US Mint series in which more that one medal design type was awarded by the President of the United States. (As a comparison, President Roosevelt awarded his Panama canal medal to a specific group of workers). The abstract and introduction can be read at: https://i0.wp.com/thehawaiiananumismatist.files.wordpress.com/2018/03/potus.jpg?ssl=1&w=450

You have done an incredible amt of research on Ike items. Long article, book in the works? I want to read it.

I had an exhibit at the 2017 World's Fair of Money relating to the Eisenhower POTUS sGm entered in the literary category. The exhibit eluded to the Manufacturing Triad (officially named after the World's Fair of Money event). A book is in the works. https://i0.wp.com/thehawaiiananumismatist.files.wordpress.com/2018/03/potus.jpg?ssl=1&w=450