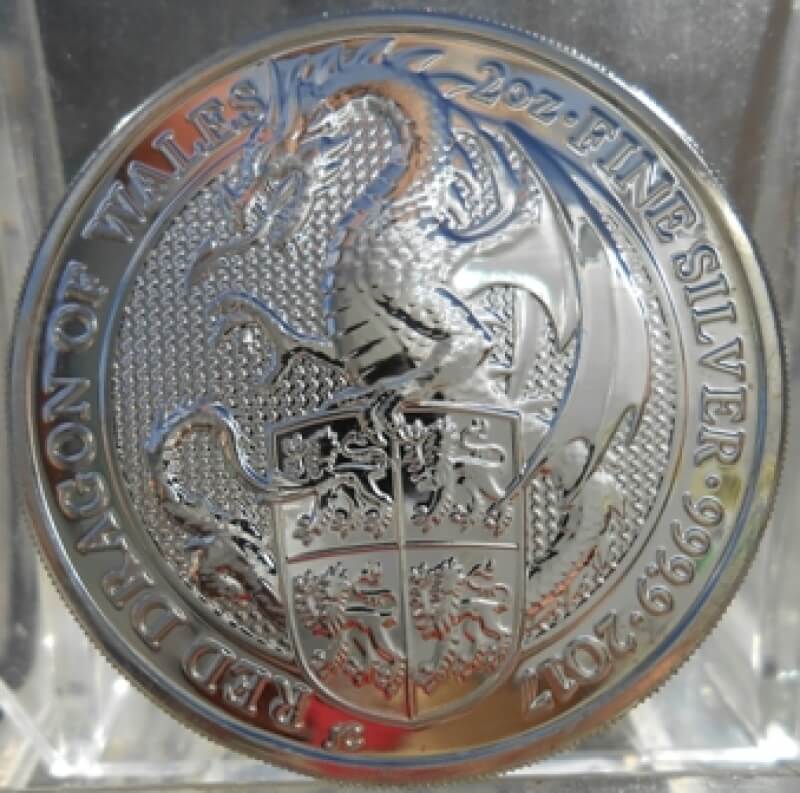 05 Nov 2017
In 1953, for the crowning of the new queen, Her Majesty Queen Elizabeth ll, a series of 10 heraldic statues were created. In 2016 the Royal Mint created a series of 10 coins to honor that event. They are being released at the rate of 2 per year. My 2017 coin, the third in the series, depicts the Red Dragon of Wales. The dragon historically symbolizes wealth, knowledge and virtue among other things. This coins is minted in a BU finish of 2 try ounces of .9999 fine, pure, silver. It has a diameter of 38.61 mm and a diameter of 53.1 mm reeded edge. It caries a denomination from Great Britain of 5 Pounds. Of some interest is the obverse and reverse were both created by Jodi Clark. The obverse, always the Queen side, features the 5th portrait of Her Majesty Queen Elizabeth ll. The reverse depicts The Red Dragon of Wales holding a detailed heraldic shield. I don't plan on buying any of the others in the series. I happen to have a great affinity for dragons, so just this one! I hope you enjoy this blog and photos. I look forward to your comments. Thanks for your time.
Sourced;
The Royal British Mint

that is a really cool coin and i absolutely love the dragon design.

I have been keeping an eye on these. Haven't bought any but I like them. Are they all 2 oz.?

Check out some of the stores that specialize in bullion. They have 5 oz. , 10 oz. and 1 kilo. Also comes in gold. Thanks!!

Or larger or gold..

Thanks for the blog. Enjoy reading it.

Great dragon design! Very impressive looking! Thanks for sharing and the great photo's! ; )

That's a really nice coin. That's in great shape and I like the design. I have to say it's a very nice pick up. I like the Red Dragon. This a terrific design. The history behind is great. History can make a coin. Thanks for that as well as the great pictures a wonderful coin congratulations . Mike

I did not know abt the statues. That is one interesting set of coins, and a dragon too. I'd like to see more in this series.