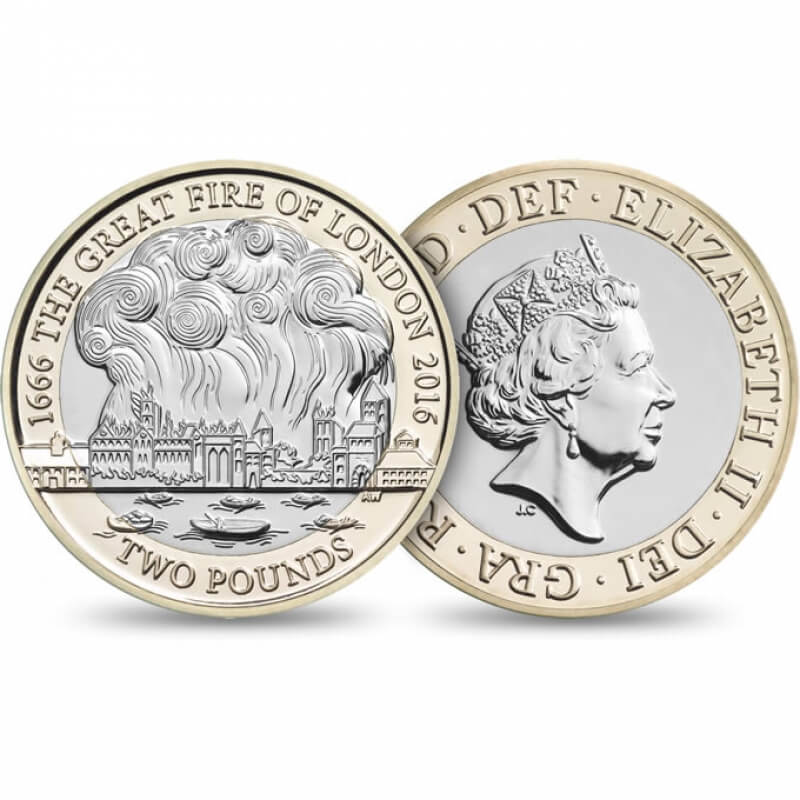 Today I will be talking about the Great Fire of London and the circulating commemorative coin Great Britain made to commemorate its 350th anniversary. The coin has a face value of 2 pounds and as I just said, a circulating commemorative. It is a bi-metallic coin with the outside ring being nickel-brass and the center being cupro-nickel. On the obverse is a Queen who has been on the obverse for 60+ years and the reverse depicts London on fire in the background, while in the foreground is a bay or port with ships in it. The coin itself is not too much to talk about so of course, I will delve into the history for you guys.

The Great Fire of London occurred in September of 1666 and was just about 12 months after a plague hit London and residents had to flee once again. The Fire is considerably more memorable for the fact that it left a much bigger, and lasting, mark on London. The Fire started in a bakery on Pudding Lane when a maid forgot to put out the oven overnight and sparks heated up the wooden home. Every possible thig that could make the fire spread faster did: practically all the city was made of wood, strong winds helped the flames along, and the city was dry after summer.

The Lord Mayor didn’t think the fire was much of a concern after hearing some reports and quoted “A woman could p*ss it out. Nonetheless, King Charles II took action by creating fire-breaks, destroying perfectly good buildings to stop the flames from spreading. He also ordered navy rations to be taken from where they were stored and be handed out to the citizens who fled the city.

The fire was also so hot that the roof of the old St. Paul’s Cathedral, made of lead, melted. The total destruction of the fire accounted to 84 churches lost, not counting St. Paul’s, and most of the north part of the city, as the south side was on the other side of the Thames. A favor of the fire was that it burned the poor, sickness-ridden parts of London and sterilized the sewers. In all, the death accounted to only 5 people, and many pigeons. “It is said that many pigeons lost their lives as they refused to leave their nests and their wing feathers got burned and they plummeted into the fire,” says C. N. Trueman. The next task was just to rebuild…

I hope you enjoyed todays little history lesson from a circulating coin. And I have a question: why can’t the US make more circuiting commemoratives? A whole bunch of other countries do it that are poorer than us, and they also have like a collector gold and silver version of the coin able for purchase but then also a regular circulating metal version. Why can’t the US do this? Our coin designs are getting so boring.

Anyway, that is just my little ramble for today and I hope you enjoyed. Bye!

Ramble on if this is what it produces. Good job. Thanks!!

Love it!! Thanks for writing about an interesting subject and a pretty coin. The flames have a Vincent Van Gogh feel to them, I think.

A very well done blog. Alot of research went into it I hope you enjoy writing it as we do reading it. Picture is also nice. Thanks mike

A really nice blog. To answer your question, don't you consider the State and Parks Quarters as circulating commemoratives. If you mean a stand alone brand new design it would mean that our politicians would have to push for it and I can't see that happening in the near future.

i do consider the state quarters a circulating commem but for other denominations it would be nice too... as for the rest of your comment, ok