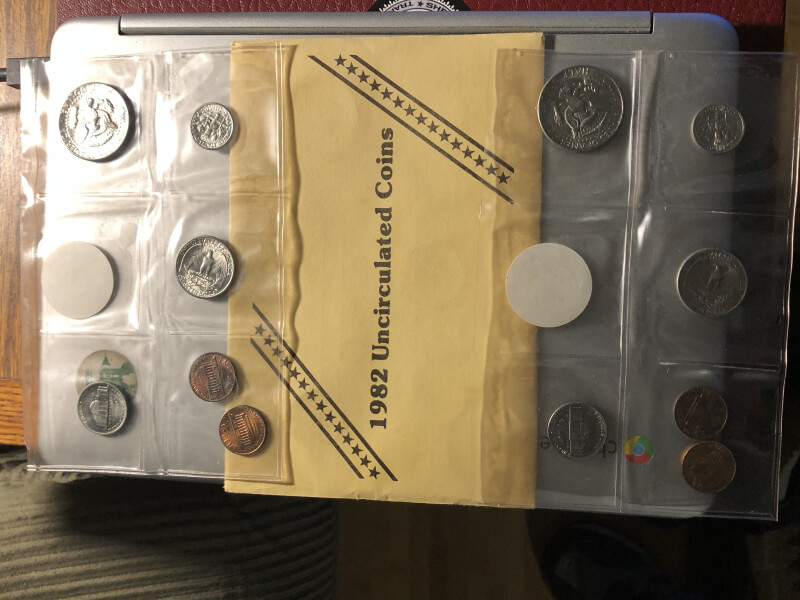 To be honest, I'm just a little confused. Recently I purchased a 1982 Uncirculated coin set off of the Etsy website. I know that I've heard good things and bad things about this particular website. I was actually looking for the 1982 souvenir mint sets, but I thought what the heck, it was anot fairly reasonable price so I ordered it. I also have a couple of 1982 proof sets and a 1982 Denver souvenir set and was trying to obtain the 1982 Philadelphia souvenir set. I have now read and re-read pages 1228 thru 1238 of A Guide Book of United States Coins Mega Red 6th Edition and consulted the Internet a couple of times and have come to what I think is a sound conclusion: there was no 1982 Uncirculated coin set.

Since most of you folks are smarter than the average "bear", I would appreciate your thoughts/comments on what I actually purchased. Of course I will add this set to the other sets in my collection just because it's different. According to the Mega Red book, there were 1982 proof sets made and 1982 souvenir sets made, but NO 1982 uncirculated sets made. That's my story and I'm sticking to it! After inspecting the packaging, I discovered several signs that sent "red flags" up in my head. As you will notice there is NO mint marks on the brown envelope. Also, the plastic packaging doesn't have the red and blue stripes at the top denoting Philadelphia & Denver. The medals are both white in the plastic. The card inside looks legit, but I'm thinking anyone could type up a card. My best guess is that these coins probably came from a proof set.

In conclusion, I paid a "double sawbuck" for this set, but I will mark it as a lesson learned. I haven't put the coins under a magnifying glass yet, but may do so before I add them to my collection with an annotation of my findings. What do you think? Until next time, stay safe, HEALTHY, and coronavirus free and enjoy the pictures!

That certainly is a puzzle! In any case, I suppose they're still pretty much uncirculated I guess lol. If you get any more info about it let us know! Sincerely, CoinsInHK or Theo

Thanks for all the comments/observations folks! I believe Mokie and Long Beard are correct. Those little white medallions do indicate Philadelphia and Denver, so these coins probably came from either a private company or a bank for sure. What was interesting to me is that card says these are "newly minted zinc cents". Was this the first year for those? Just wondering! LOL

1982 was the start of copper plated zinc cents. The change was made mid-year so some 1982 cents are bronze and some are zinc.

No mint sets from 1982 or 1983, that is why the souvenir sets are sought after, and why mint state coin from those years are so valuable.

Official or not, I like it and wouldn't mind owning one of my own. Thanks for sharing. By the way, who is that young, clueless guy? A cousin? lol, Later!

To the best of my research, and talking with those in the know, the sets of 1982 and 1983 were issued directly from their respective branch mint gift shops and not through the mail. These come in a blue envelope, stamped with the mint on the outside. The inside packaging looks identical to all other sets, but includes a much larger bronze token. But I have seen them in white envelopes and been told that banks issued those on their own. . Either way, very nice looking acquisition!

No matter. They look great. The mint isn't the only show in town.

You have a private issue unc. set, since none where made by the govt. Still nice set

I had a really difficult time getting those two Kennedy Halfs, the 82 and 83. Finally had to buy them slabbed.

Hi nice to see your back. If I can remember there was no 1982 or 1983 Uncirirculaded sets. This because it was hard to get a Kennedys those two years. When they advertise books of Kennedy's they always say and it includes the 1982 and 1983 Kennedys! Now us Kennedy coin fanatics we want the real.set. I managed but don't remember how. Ok I know is I did find them and there in the books with all the luster a coin can have. We always find a way. Thanks

Very confusing for sure. Since it says Mint Set. It should say who and where it was made somewhere? Still a nice set of 1982 coins, and collectible.

Charlie, when the mint chose not to make mint sets available that year, except those sets sold at the mint gift shops, a lot of private companies decided to fill the void by buying rolls of uncirculated coins and making their own sets to fill the gap. It is not official so therefore it is not considered collectible by dedicated mint set collectors.

Yes, I resemble that remark Mokie ! I did read that part in the Mega Red book also. It's one reason I pointed out the packaging. Thanks for replying buddy!