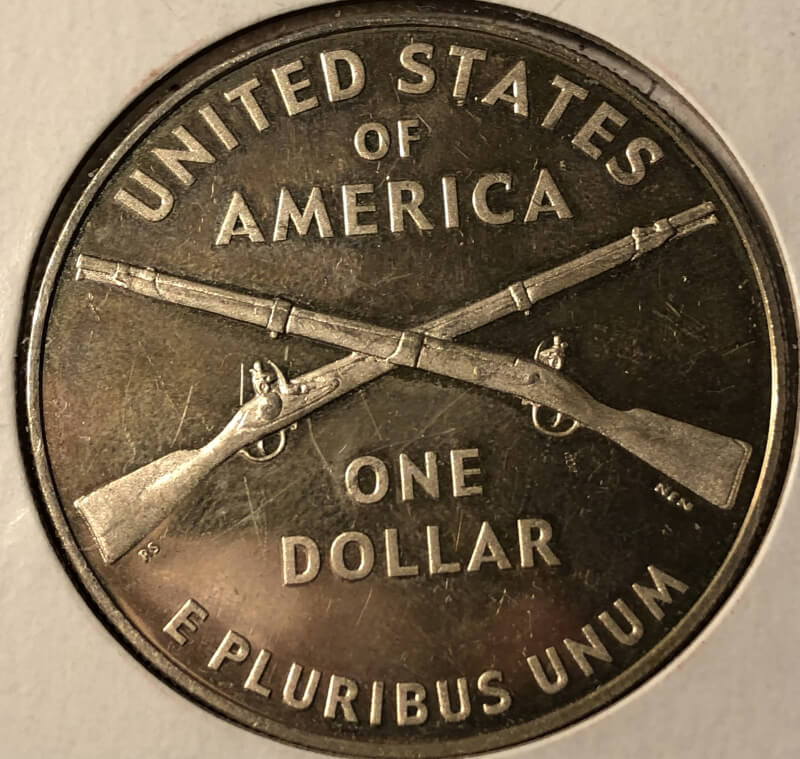 † † †I want to start by wishing everyone a happy and prosperous New Years. As most of you know, I‚Äôm not a member of any coin clubs. I have been thinking about joining a club and have checked into the prospect a couple of times. My local coin dealer that I do business with is the President of 2 such clubs in my area. On the 6th of Dec., 2021 I attended my first coin club meeting. Mark, the president did give me a heads up that this club has a auction and started at 1900 (7 p.m.) and to be there at about 1830 (6:30 p.m.). I showed up at 18:45, and Mark was right; they auctioned off quite a few pieces and then the meeting ended. I did participate by purchasing the last item which is the 1858 small letters Flying Eagle that is pictured with this post. It was graded as a ‚Äúgood‚ÄĚ and I think that‚Äôs the proper grade for this coin. The flip had $15 on it but bidding started at $10 which is the price that I paid, which I thought was a pretty good price for a flying eagle! I was a little disappointed with the meeting because I really thought that after the auction there would be some discussions of the pieces sold or some other aspects of the hobby. I haven‚Äôt talked to Mark since the meeting, but if he brings the subject up I may explain how I feel about the club‚Äôs agenda. The other 2 pieces pictured here are the last coins that I bought in 2021.

† † †Most everyone that reads my posts knows that I‚Äôm a veteran so naturally the 2012 Infantry commemorative caught my eye and was affordable. It‚Äôs still enclosed in a flip, but that will change as soon as my inventory is completed. It will be slabbed and stored along with my other military coins. This coin was designed by Joel Iskowitz (obverse), Ronald D. Sanders (reverse), weighs 26.73 grams, is composed of .900 silver, and .100 copper. It is 38.1 mm in diameter, has a reeded edge and was minted at the West Point mint. The mintage numbers are 44,348 uncirculated and 161,151 proof pieces. Although my active duty years were spent in the artillery, this is a very attractive coin and it‚Äôs depiction is accurate for the branch of service it represents. There are quite a few modern commemoratives in my collection, but most are in my collection of prestige proof sets.

† † The Matron Head large cent was possibly designed by Robert Scot or John Birch; weighs 10.89 grams, is composed of copper, is 28-29 mm in diameter, has a plain edge and was minted in Philadelphia. It‚Äôs mintage is 2,357,732. What I thought most interesting about this particular coin is the grading system that‚Äôs used to assign it‚Äôs grade. I‚Äôm currently looking into the ‚ÄúNewcomb‚ÄĚ grading system which is apparently used in conjunction with the Sheldon system. I graded the below Matron Head as a N1-G4. Currently, it‚Äôs the only large cent that I own, so it will eventually be housed in a slab. I‚Äôm considering adding a better condition large cent to my collection at a later date. I already have 2 Flying Eagles in my collection, so the one below will join the other 2.

† † †I‚Äôve usually put up a post before now, but as I‚Äôve indicated in previous posts, I‚Äôm right in the middle of my annual inventory. Not only that, but I‚Äôm changing over to a ‚Äúdigital‚ÄĚ format for my inventory. I was considering creating a digital journal also, but I‚Äôve scrapped that plan and will continue with my ‚Äúpen and paper‚ÄĚ red ledger †entries. Currently I‚Äôm up to December of last year with my digital inventory. I would estimate that it‚Äôs probably 70% to 75% complete. I have completed the sheets portion of my spreadsheet and 95% of my tables within my sheets. The only thing that‚Äôs currently dragging me down is the data entry portion. Just as soon as I complete that part, there‚Äôs still some extra work to be done as far as forms, pivot tables, and relationships of the sheets and tables. I‚Äôm the kind of person that will continue until I get it like I think it should be, which is saying a ‚Äúmouth full‚ÄĚ! I know my patience isn‚Äôt my strong suit, but I will persevere †ūüėď. !†

† † †As always, stay safe, HEALTHY, and coronavirus free. I would like to leave you with a Mark Twain saying: The 2 most important days in your life are the day you were born and the day when you find out why! † †

Nearly there, impressive. The trouble is, computers were suppose to eliminate the need of paper yet it's the exact opposite. They do, however, make things much more accessible and simplified.

Thanks everyone for the kind words and encouragement!

Happy new year to you too! It is a chore to inventory your collection. Hang in there and chip away at it one at a time. Before you know it, you'll be done. Have a prosperous and safe 2022! Gary.

I agree Gary! Transferring over to digital is the time consuming part. If I had someone to do my data entry it would cut my time in half‚Ä¶.ūüėÖ You have a great New Year also buddy!

I didn't know you were a red legs!

LOL Kepi ! You should make Longstrider do your inventory for the raise you gave him for his monthly budget ūüėā !

Happy New Year! I am glad you went to a coin club for the first time. I really like the Flying Eagle Cent. Thanks for sharing!

Charlie, you are a member of a club, the largest coin club in the world. Thanks for your blog, entertaining as always.

I send You my respects for your service . I collect both US and World coins and details keep grabbing my attention of historical and military features . Heritage and freedom are upfront when you get a new coin. When I write about places and Countries l do so from the experiences of my older brother who has travelled all Europe and is a US Navy Veteran . I have gained much knowledge of coins from life . Your collection here is impressive and l cherish your military coins . Thanks for sharing.

Happy New year. That Infantry coin even has a camp pattern. Nice. Good pick ups my friend. I just bought a digital coin program yesterday. I am so behind I thought i would try it. Thanks.

I love those Flying Eagle cents!

Happy New Year!! I don't have any clubs near me. So two clubs were nice enough to let me join. We have two million five hundred thousand people and no club!! That's unbelievable!! Enjoy those coins. Nice!! We have the same taste. I have that beauty 2012 coin!!

Happy new year to you also. Our coin club holds the auction after the meeting. Once a month we meet for two hours or so. The first hour starts with the meeting. We do a welcome by the president, old business, new business, secretary report, treasurer report, etc. Try to have a 15 minute presentation by anyone that wants to present about a topic about coins, or once a member did a John Wayne collection presentation. After the meeting we hold the auction. Members only can bid. You can submit 10 items at a time on a sheet. Cost is 50 cents a item, whi h goes into club fund. The board holds a separate meeting usually once a month to discuss annual coin show and running the club. Just to give you an idea. I think our club is typical of a coin club.