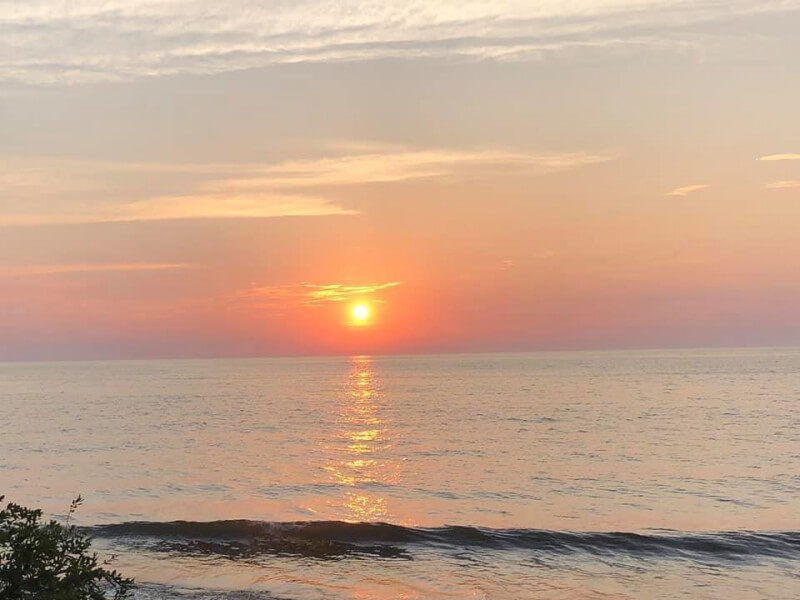 To quote the Eisenhower dollar guide (https://eisenhowerdollarguide.com/1976-eisenhower-dollar/) "The 1976 Eisenhower Dollar  featured a new reverse design issued to celebrate bicentennial of the American Revolution. The redesign of the denomination was authorized by Congress, along with the requirement that coins issued between July 4, 1975 and January 1, 1977 should carry the date â€ś1776-1976â€ť rather than the date of mintage. A national contest was held to solicit Bicentennial coinage designs from the public. There were 884 entries received with bicentennial designs for the dollar, half dollar, and quarter. The winning entry for the Eisenhower Dollar was submitted by Dennis R. Williams, who at the time of selection was a 22 year old student majoring in sculpture. He was awarded $5,000 for his design featuring the Liberty Bell extending over the moon." The specifications for these coins are the same as for the others: weight, 22.68 grams (clad), 24.59 grams (silver), diameter 38.1 mm, with a reeded edge. At the San Francisco mint, authorization was provided to strike up to 45 million dollar coins in a composition of 40% silver. Proof and uncirculated versions of the Washington Quarter, Kennedy Half Dollar, and Eisenhower Dollar were produced and sold to collectors in 3 coin silver uncirculated or proof sets. Orders were accepted by the US Mint starting November 15, 1974, with shipment beginning after July 4, 1975. This 3 coin set is pictured on my Eisenhower dollar collection page.

The mintage for these 4 coins are as follows: 1976-S silver, 4,908,319, 1976-S silver proof, 3,998,621, 1976-S Type1, clad proof,  4,149,730 and the 1976-S Type2, clad proof with the same mintage as the Type 1,  4,149,730. This is a very short series to collect. Per the Eisenhower dollar guide "The Eisenhower Dollar was issued from 1971 to 1978. The obverse of the coin features Dwight D. Eisenhower and the reverse is based on the Apollo 11 mission insignia. For circulation, the coins were struck in copper-nickel clad composition, although â€śsilver dollarsâ€ť were also produced and issued for collectors. Despite the short duration of the series, the different compositions, varieties, and conditional rarities provide complexity and challenge for collectors." I still need the 1977 and 1978 coins to finish my collection.  It reminds me of a picture that I took on vacation which I will include with the pictures of these beautiful coins.

As always, stay safe, HEALTHY, and coronavirus free. I hope everyone has the opportunity to take a few days to recharge their batteries and look at life through a new lens.

P.S. The vacation picture was taken on the eastern shore of Lake Ontario, enjoy!

I have to say I like IKE, well at least the IKE dollar as I am to young to have any memories of IKE the president or general. I do though remember my dad presenting me with a stack of shiny new Bicentennial dollars before we began our trip from North Carolina to California. I also remember when I was a young man looking through adds in the Coins Magazine you could get the three piece silver proof set from the mint for just $15 into the early eighties. I also always like playing the slot machines in Reno and Carson City that would pay out in IKE dollars, granted these pieces were well worn but boy that make a solid ring in the bin when you win. Thank you for sharing!

Missed you Charlie, glad you all had a great getaway! Thanks for your blog, I learned a lot about Ike's that I didn't know about the Bicentennial issues

Definitely a relatively easy set to complete but as the last of the big cartwheels, something everyone should consider. I'm guessing it will only go up in popularity, particularly all the 40% silver issues.

What a coincidence that you chose this subject. I was about to post a similar one on the popularity of modern clad-coinage over the past five years, how auction prices have suddenly soar for a few series of which the Eisenhower has seen the greatest. Now is the time to buy these with popularity rapidly growing.

I wonder if more people would collect these big beauties if they truly were silver and not clad. I mean 90% silver like Morgan's and Peace dollars. Very underrated. Thanks.

I like Ike also. These coins are beautiful. There underrated. I don't know why. His commen did well.Great story about the contest. That's a great set also. I like the two designs. And it's an easy set to collect. You hit a home run with this one. I enjoyed it! Great reserch!! Love the lake!!