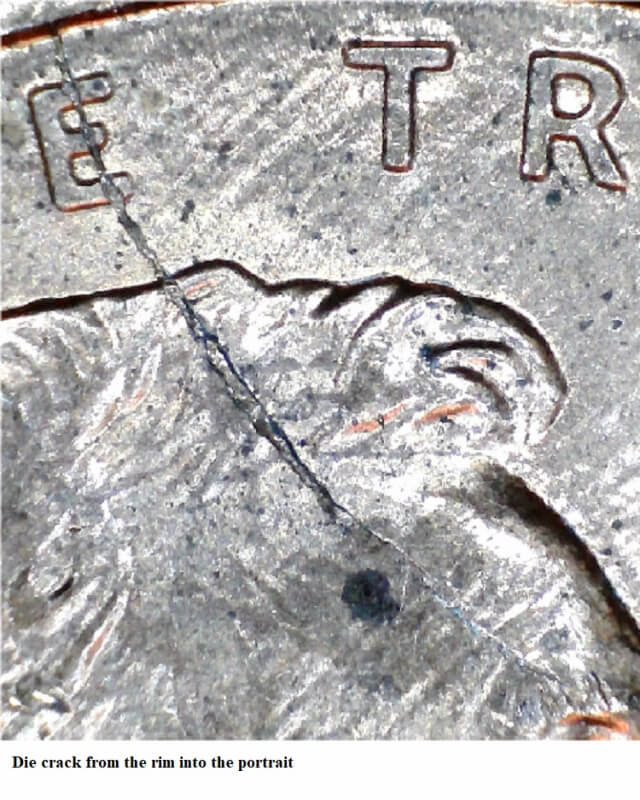 The best definition of a die break is from PCGS. āAn area of a coin that is the result of a broken die. This may be triangular or other geometric shape. Dies are made of steel and they crack from use and then, if not removed from service, eventually break. When the die totally breaks apart, the resultant break will result in a full, or retained, cud depending whether the broken piece falls from the die or not.ā

A die crack is a form of a die break, but most numismatists have a definition for both. A die crack refers to an irregular line of raised metal on the surface of the coin. Die cracks are thin lines that sometimes branch out in several directions giving some coins a lightning strike appearance. Die breaks can be refined to include pieces of the die breaking off the die, causing a raised area of metal that replaces part of the coin's design. Die breaks include cud and retained cuds. A retained cud is a piece of the die that has broken off but is kept intact by the collar. Coins minted with a retained cud show a shift in the metal on the coin's surface, overlapping the intended design.

Die cracks are usually of no added value. Die cuds are valuable, and the value is related to the size of the cud. A large cud can be worth $50 to $100. A cud can easily escape all forms of detection, including the coin rolling process from the banks that purchase coins by the box from the Federal Reserve.

Die cudās are awesome. Weāll see if I find one, but I havenāt yet. I donāt think there are any huge premiums to the die cracks though.

Very interesting. Will definately be looking for these. Thanks

Die cracks are a favorite of mine! Good blog! ; )

Nice blog! I have actually found two nice cuds. And I have found LOTS of die cracks-they are fairly common.

If you go to your local bank and get a box of Lincoln cents, you might be able to find some. I have hundreds of die crack errors I located in rolled coin. They are common.