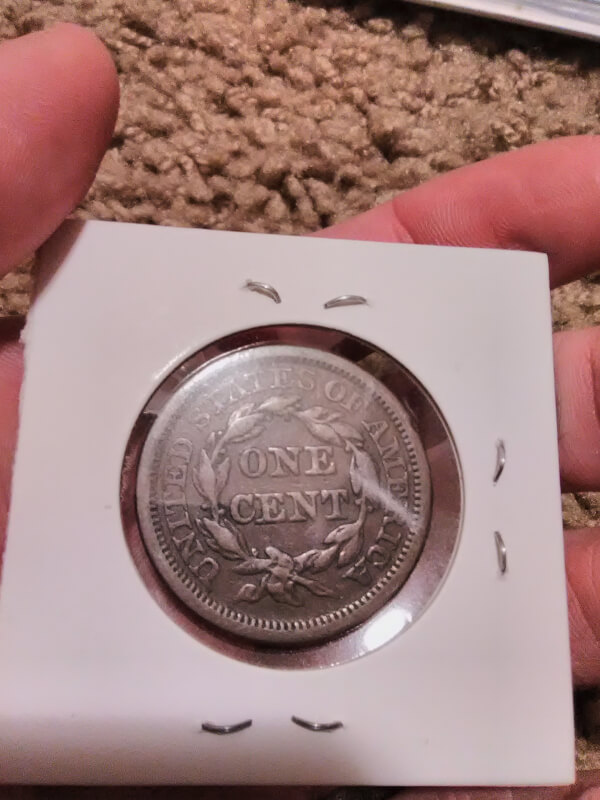 Good evening my fellow numismatists!  Before I get into my coins, I first have an exciting announcement!  I have an article appearing in the March/April edition of the Errorscope on the 1960 D/D Cent on page 25.  Keep a close eye out!!

Now for my coins.  I recently completed the first few requirements for my EAC (Early American Copper) Project the ANA makes available to us YNs.  If you have not completed it, I highly suggest you do.  This meant that my previously rough Large Cent type set was in for a massive upgrade.  I sent in my forms, and got my coins within the same month.  I received an 1824 Coronet Cent, an 1845 Braided Hair Cent, a 2000 Steam Press Commem with BEAUTIFUL toning, and a Coronet Cent reference guide that goes over the different errors/varieties that exist in every year.  I was able to use this book to identify the date of a cull Coronet Head Cent that I was later able to sell for a $20 profit at $50 due to the rarity of the date.  (It was an 1817 15 star).  I also couldn't help but show you all my cull Draped Bust Cent, as well as my new 1864 2-Cent Penny.

While my cull Draped bust is not the most pretty coin I own, it IS special.  My budget is extremely low, and this was about all I could afford.  I got this coin in a trade with a fellow YN, and am very happy with my purchase.  I have tried for hours on end to figure out the date, but I was not able to come up with anything concrete.  I believe it is from the 1790â€™s but cannot figure out the last digit.

The 1824 Coronet Head is in very nice condition, although it seems like it was cleaned.  It has a subtle pink coloration that appears to me to be chemical residue, however it could simply be toning.  I plan on investigating this coin much more carefully.  Unfortunately, It has no special varieties or errors,  but it is the best condition Coronet Head Cent that I own.

The 1845 Braided Hair Cent is in WONDERFUL condition.  I have put it at around 40 or so.  I have yet to pull out my loupe for it, so that number might be off.  Regardless, it is a wonderful coin with an amazing strike.  It has a low mintage of 3,894,804, and I love this coin with all my heart.

I am normally not that interested in commemoratives (although I have a healthy bid on one of the commemorative coins for the monthly YN auction) but I like this 2000 Steam Press Commem. for the amazing toning it has.  It is my favorite toned piece I own, however that 1970-S Proof cent for last month's YN auction comes in as a pretty darn close second.

The 1864 2-Cent Piece is another favorite of mine.  I love obsolete denominations in coinage, and it is from the Civil War era.  On top of this, the 1864 2-Cent was the first coin to debut the motto â€śIn God We Trustâ€ť which was added in light of the Civil War which had just barely concluded, leaving a battered, broken, and bruised nation in its wake.  Some would argue that the US took decades to recover.

Thanks for reading, and thanks to all those who donate to the ANA (both coins and money) for making things like the EAC Project and YN auctions possible.  We recognize you out there!  Have a good weekend, and stay safe!  Catch ya later!

Sometimes I figure out a date by looking at date digits for that coin and then 60x magnification. Sometimes I can get a date that way even if there are only faint traces of a number

Wow! I need to try that!

Nice coin . My wife hates coins. She found one just like this she said it was her lucky coin. I said there's no luck in that train wreck! So I bought her one. I thought it might turn her . No way. Congratulations on your article. More to come!!

Does the 1864 two cent piece have a large motto or small motto?

I have the common one too

Sadly it is the common variety

Congrats on the article. Nice pick up.

Congratulations on the article being published! Nice coins as well, I'm proud for you!

I am really having trouble keeping up with all of these new blogs. They look great! I am considering to extend my small cent collection to large cents, though it would be very pricey. Thanks for sharing, I can't wait to hear more!

That draped bust cent is beautiful even in the low grade! I am glade you like the two cent (wink wink), I thought you would like having the first year they were made.

I do! Thanks so much for the trade!

nice job I will need to work on the copper project.

That's a nice set of coins! I'm looking forward to your article. Congratulations!

Great coins! Congratulations on your upcoming article. I'll be looking for it. ; )

Good blog. I like coins with wear on them. Congratulations on the article. great work. keep it up. Thanks.

I take my hat off to you. A very excellent blog. I enjoyed it. Congratulations on having an article published . Get it lamanated. And keep it protected. Those are all great coins. Enjoy them.

Congrats on the article that will be coming out. And for advancing in the course. And finally picking up some nice coins. As always you are way ahead of many of us. Keep working and stay safe. Mr. B

Very nice work on your article. Looking forward to reading it. Something to be very proud of. Your coins are really nice. I love the old coins. The coin from maybe 1790 period is great.

Impressive. The title caught my attention since, coincidentally, I just started the Canadian Large Cent series this week. As for the U.S. version, I only have four or five and all dark chocolate. Still nice though.

Wow, I cannot wait to see your errorscope article. Quite an accomplishment, you and Longstrider are our CONECA Kings. Love your collection and especially your passion. Keep it Up!!!

Thank you! CoinHunter also has an article in it!