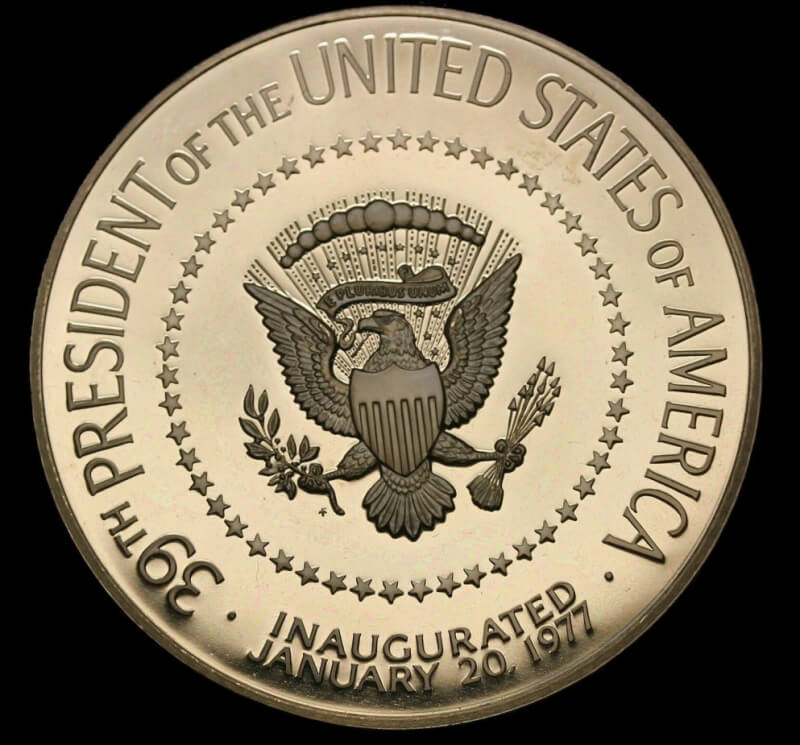 Discouraged by Franklin Mint's bidding war for the 1973 Nixon Inaugural Medal (See Coin Thoughts #86), The Medallic Art Company did not try hard to win the contract to strike the medal.  Franklin Mint realized that it paid more than $300,000 too much for the 1973 Nixon contract, offered $500,000 to the Carter Inaugural Committee, thus winning the contract.  Georgia sculptor, Julian Hoka Harris, had started working on the medal portrait even before Jimmy Carter was elected.  Harris chose to show the new President in a contemplative mood, without his famous smile.  Just over 50,000 bronze medals were produced in antique or proof finish. This medal and the 1973 Nixon medal were the only Official Inaugural Medals struck by the Franklin Mint.

I found one of the Proof Carter medals at a yard sale last year. They are quite large and heavy. Not as artistic as the Medallic Art Company always produced. Still a nice tribute.

What a coincidental post. I was just looking on the mint's website at the medals and debating on the silver or the bronze. I'm leaning towards the bronze due to the size/design options.

Always liked the stylistic way the engraver did his hair.

Jimmy Carter is the first president I can remember from my youth. I didn't know enough to either like or dislike him at the time. I can't ever remember seeing him look that serious. I enjoyed your blog. Medals are a great thing to collect.

Not my favorite president. Great pair of medal though. Nice pick ups. I enjoyed the history of the medals. More politics.. Thanks.

I had this medal in a small silver version, I actually still had it until this past October when it went to our coin show's auction to raise money for our KidZone.

I was researching Roosevelt and his medal. So I called h?is library . Sure enough they had the medal there and they sent me a copy of the original medal. Just a tad but I got what I needed. I liked the blog but I would of liked.to see his smile. It is a very good likeness. Politics in medals. Thanks allot.

Wonder where the medals are now? Will be looking at medals at next coin shows to see what i find. Thanks for the post.