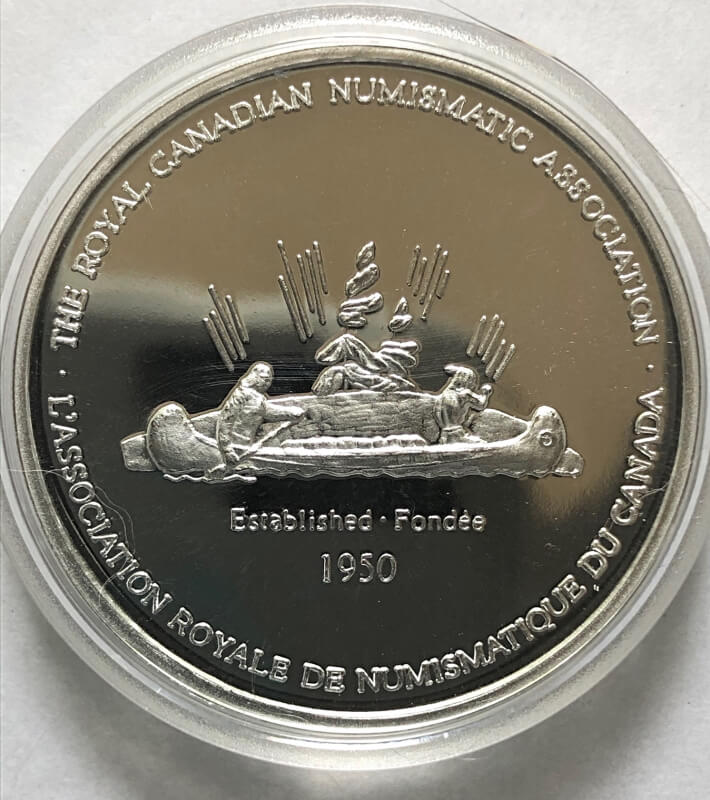 This spring and summer have been filled with endless disappointment for those of us in the Numismatic community.  Major shows have been cancelled and even our local coin clubs have shut down for extended periods.  I just received something in the mail that has put a smile on my old collector mug.  It is the 2020 Royal Canadian Numismatic Association (RCNA) convention medal.  Even though the annual RCNA show was also cancelled, just like our own ANA, they chose to go ahead and release their medal.

I had read about their decision in the RCNA Journal and had emailed the Secretary asking for one of the medals.  I was told they were sold out but that I would be sixth on the waiting list should one become available.  A month or so later, I received an email telling me one was available if I wanted to buy.  I DID!!!  So here is the story of this beautiful silver medal.  The obverse depicts the Grand-Pre Church, part of the Acadian Historic District in Halifax, Nova Scotia along with a portrait of Evangeline, the central character in Henry Wadsworth Longfellowâ€™s famous and tragic poem â€śEvangelineâ€ť.  The reverse depicts the traditional Voyageur Canoe seen on the reverse of Canadian Dollars until the Loonies appeared.

I have a strong desire to visit the Canadian Maritimes, including Nova Scotia once it is safe to do so.  I am very happy this beautiful medal fell into my lap.  If you want to read much more about Longfellow and Evangeline, please follow the link below.

Who says patience isn't a virtue? Great looking coin Moke, and even a more interesting story! Living in upstate NY I get my share of Canadian coinage, but I'm certainly running short in the medals category... :-) Great catch buddy!

Beautiful medal ! Would love to have one of those. Like Canadian coins and medals !

Mokie you devil! That is a sweet coin. And for a convention that never happened. Well Done!

That is very nice. Great medal. That would make me smile. I really like Canadian coins. Their non--circulating coins are a bit overdone in my opinion. just too many. However I certainly have my share of them. I'll be happy to go with you to Canada when we can. I'll carry all your new pick ups. Thanks for the history and photos. Really good job.

I that silver? What great luck! Another beautiful keepsake to show people decades down the line to explain how this all happened, but you still have a medal.

You pulled the rabbit out of the hat on that one. Congratulations on a beautiful medal. This will look great in your man cave!!!

Nice looking medal. Hope your travels come together in the future.

A beautiful medal and I love the pre Loonie dollar reverse. I'm always on the lookout for pre loonie Canadian dollars to add to my collection.

Mokie, I love this medal! It is absolutely beautiful and will fit well in your Canadian collection. I have always liked the canoe design on Canadian dollars. My congratulations to you on hitting the waitlist lottery!