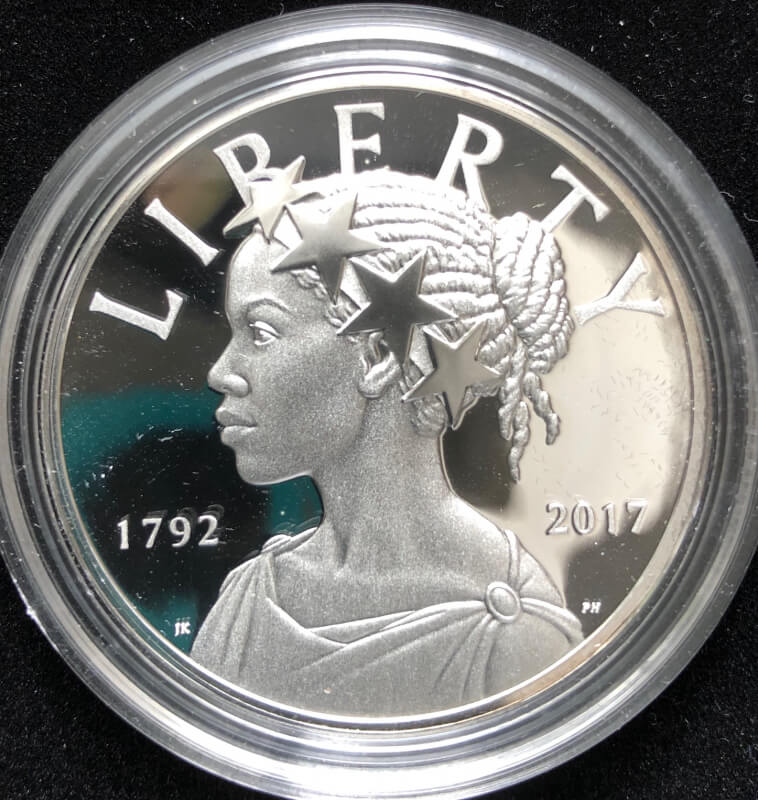 2017 was a momentous year in the history of the United States Mint and once certainly deserving of special products.  One of the popular items was the 2017-S Enhanced Uncirculated Mint Set.  These enhanced finish coins were not double struck, like a proof, but were struck on carefully handled planchets that have a soft matte finish, very pleasing to the eye.

But controversy arose with a special medal produced for the 225th Anniversary.  The medal was made in Gold with 1/10 and 1 Ounce versions from the West Point Mint.  The Mint also produced 5 different 1 ounce silver medals.  These five medals were a standard Proof from Philadelphia, a standard Proof from San Fransisco,  a reverse Proof from Philadelphia, an Uncirculated from Denver, and an Enhanced Uncirculated from West Point.  The last 4 of these were issued together as a set.  That's why we have both a Philadelphia and a San Fransisco Proof.  The Obverse of each medal depicted an allegorical Liberty and the reverse depicted an Eagle in flight, both designs having a modern flair.

Sounds good so far, a nice assortment of items for the 225th Anniversary but the controversy arose due to the choice of allegorical Liberty for the Gold and Silver issues.  Instead of using a European featured liberty (even on our Liberty Heads with Indian War Bonnets), the Mint chose a very modern looking and very African-American looking Liberty.  Personally, I found her very attractive and i bought all the Silver issues and one extra in a slab.  But reading message boards around the time of issuance, I could clearly see a very strong collector backlash against the Mint's choice for their Liberty.  Some people said she looked just like Michelle Obama (and they were not pleased)  some just said it was ugly without really explaining their reasoning although the subtext was often barely concealed.

Due to the Mints controversial choice of Liberty, I suspect sales may have suffered but I am very happy with my purchase and I hope the Mint is thinking outside the box for our upcoming 250th Anniversary.   The beautiful obverse was designed by Justin Kunz with the Mints Sculptor/Engraver Phebe Hemphill bringing it to life.  The exquisite reverse with its soaring Eagle was designed by Chris Costello with Sculptor/Engraver Michael Gaudioso.

Liberty does come in different ways.

There is a plurality of all ethnicities in this country and I'd like to think that everyone equally enjoys the blessings of liberty. This medal then is certainly representative of that plurality. Given the climate currently in this country, I don't think we're quite up to the ideals personified in this medal. As such I think the mint was right in minting it and you are right to buy it. I hope by the 250th-anniversary society will be in-sync with whatever liberty design is portrayed. Controversial or not that's my two cents!

The red book says this is like really expensive. I would not have bought it it seems overpriced.

I'm glad you are enjoying this beautiful coin. If you like the coin buy it, if not pass. I like the depiction of Lady Liberty, but I have to agree with the others, I hate the stars... a bit over done I think. That's the first thing you see, not Lady Liberty...just giant stars. ; ) ***** haha

I remember when it came out, the report that some people did not like it due to an African- American Liberty. I never personally read any of those comments but do not doubt they were true. Sad! People need to remember our countries past but get on with it. I was not a big fan as I thought those stars were too large and distracted from the beautiful Liberty portrait. Back to the racists, I would wager a lot of folks didn't like the Liberty portrait on the Peace Dollars. She is an Italian woman and Italians were not loved back then. Same deal. As an Italian American I couldn't care less. Racist hate..I'm happy you were able to get all the silver issues you described. I bet they look great together. Thanks for the info. Nice blog..

I never since I saw it thought of a person of color. No I did not like it. Two reasons the first was I thought the stars were way out of proportion with Liberty's face. They looked ten times size they should of been. Second the Beautiful eagle did not fit totally on the coin.. Besides those two things it did not catch my eye. If it had different dimensions I would of picked it up. I never thought it was controversial. Thanks for a good blog. Mike.