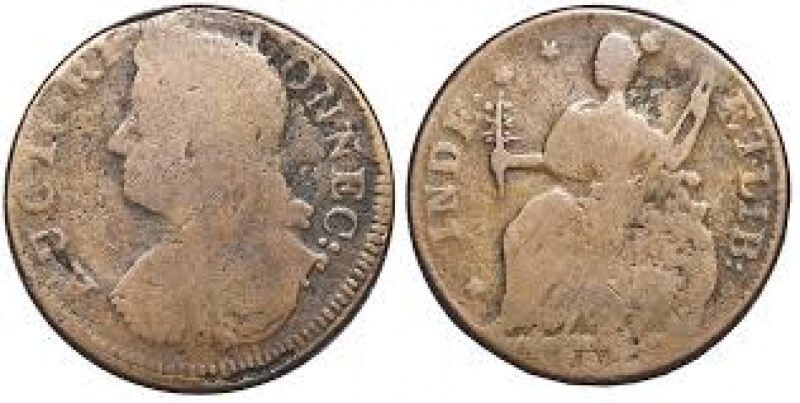 I recently purchased this colonial coin.  It has the inscription AUCTORI CONNEC (Authority Connecticut) and INDE ET LIB (Independence and Liberty), these old coppers are quite rare and highly sought by collectors. There are many different varieties, but only a very few well preserved specimens.  My coin is heavily worn and somewhat discolored. This coin is about the lowest collectible grade and is only worth about $30 dollars, but I love it and the history that it represents. Better preserved specimens are worth quite a bit more. Very, very approximately:

Connecticut coppers have the most complex minting history of all colonial issues. There were more than 355 die combinations, with at least 126 type varieties having 26 distinct bust styles made by at least six different mints. Yet, the basic design of the Connecticut Coppers never changed; all issues imitated the British halfpenny! The obverse depicted the bust of a man wearing a laurel wreath, the figure sometimes faced to the left (as George II) or to the right (as George III) and was either clad in mail armor or draped in a toga. The obverse legend was one of several forms of Latin abbreviations for the phrase "By the authority of Connecticut." The reverse depicted a seated personification of Liberty closely resembling the British Britannia with a legend consisting of an abbreviated form of "Independence and Liberty."

Here is the advice I was given to identify the variety:

General attribution of a CT copper can be done fairly easily; narrowing it down to a particular, 100% correct attribution is much more difficult especially in worn specimens.

Let's start with the obverse. We're going to look at three main things:

1. Does the bust face right or left?

2. Is it draped (robed) or mailed (wearing mail armor)?

3. What, if any, punctuation is present in the legend?

In the case of my coin:

The most common Connecticut coins for 1787 were of this type; the obverse was called Miller 33, which has 45-50 possible obverse variations. These variations are distinguished by, among other things, the location of the punctuation in the legend, the position of the legend, the shape of the head, the shape of the nose, die breaks, planchet flaws, etc.

The reverse is a bit more difficult to deal with given its condition! Miller 33 had many die pairs, each of those reverse dies had its own sub-varieties as well.

The I in INDE is evenly spaced relative to NDE

The exergue has been obliterated.

In addition, the branch hand is pointing to the E in INDE, and that E is higher than IND.

The olive branch leaves appear to be intact, not separated.

That should help me narrow it down on the reverse with the coin in hand; I haven't got a reference book here to go by, but hopefully this gives me some information and a starting point.

I think $30 bucks is a bargain. I have several "problem" coins. I was able to afford them and get into a series I normally would be able to afford. Great history and research you have for us. Thanks.

Thanks for sharing your coin and what you have learned about attribution. Colonial coins are not currently a part of my collection, though they one day may be.

This is a beautiful coin. Good find. This research will definitely have come in handy in the future. Thanks.

Absolutely wonderful xoin. That coin will tell you things. They all have a story. Thanks for sharing it with us. Protect it. Nice pick up and I enjoyed your blog. Pat

The way you presented the information was great. Nice blog!

The way you presented the information was great. Nice blog!

Great history! I really enjoyed your blog. This coin is only worth about $30.00! What a deal!

Very well put together blog Thanks!

Fantastic Blog, I am amazed a beautiful colonial coin like that is only worth $30.00. Good honest wear and a fascinating backstory, what more could you want in a coin. Thank you for sharing this.

The struggle these coins witnessed makes them all the more interesting.

Wow! Awesome coin! Only $30 for that amazing piece of history. The varieties of the piece are quite interesting as well.