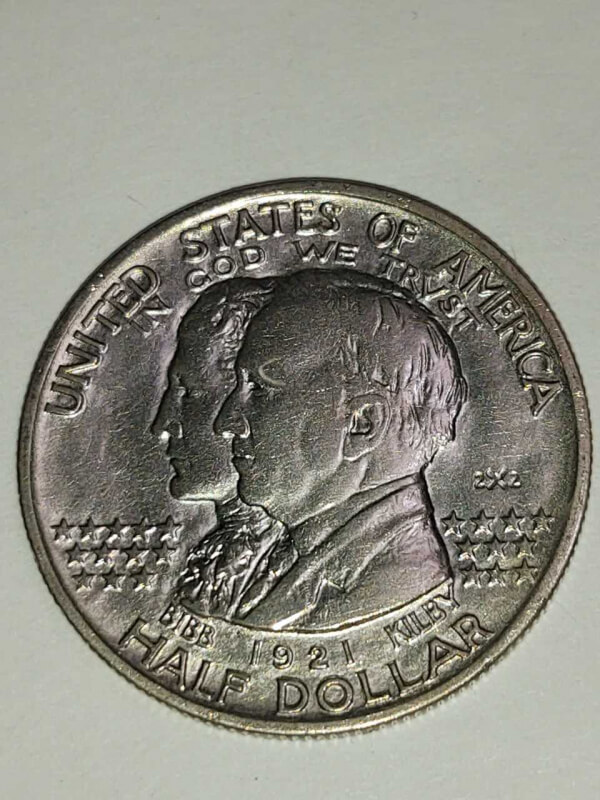 Today I would like to share with you one of my most favorite coins, the Alabama Centennial Half Dollar.  It is near and dear to my heart because I spent a great part of my life in Tuscaloosa for graduate school and worked at Bryce Hospital as director of the forensic unit with mentally ill criminal offenders. It was a good job and I got a great education at the University. I have many fond memories of my years down there.

Congress authorized the minting of this coin in 1920, though the Centennial was actually in 1919. A maximum of 100,000 coins were authorized to be struck, but only 70,044 were actually struck. The 44 were assay coins which means they were used to verify the silver content and quality of the strike. There were two varieties, the the second variety had a 2x2 device roughly at the 3:00 position of which 30,000 were struck and the first variety without of which 35,000 were stuck. However approximately 5000 were melted at the mint. This coin weighs 12.5 grams, and is composed of .900% silver and .100 copper. It's diameter is 30.6 millimeters and had a reeded edge.

It was designed by Laura Gardin Fraser, wife of James Earle Fraser. She was the first woman to design any coin in the world, not just the first in the U.S. While best known as an artist of medals, she also created many beautiful statues such as the one of Lee and Jackson meeting mounted on horseback that was commissioned and dedicated by Nancy Pelosi's father, a politician from Baltimore, until Cancel Culture sadly forced its removal this past year. Nancy seemed glad to see it go.

The obverse of the coin features Alabama governors, William Wyatt Bibb, who the first governor of Alabama and the present governor at the time, T.H. Kilby. Kilby's image in another first, was the first living person placed on a coin. On both versions of the coin on both sides of the governors we see 22 stars in the field. On the obverse of Version II we see the 2x2 device mentioned earlier. It represents Alabama being the 22nd state and the X between the twos represents the Alabama state flag, a red cross on a white field.

The obverse is a stylized concept of the Great Seal of the State of Alabama that was in use at the time, since replaced in 1939 with the design we see today. The top reads State of Alabama and under that is in my opinion the best representation of the heraldic eagle used on our coins. The eagle holds a ribbon with the old state motto "Here We Rest".  (This always reminds me of the Motel 6 commercial with Tom Bodette- We'll leave the lights on for ya!)  At the bottom of the reverse we find at the 7:00 position 1819, "Centennial" and at the 5:00 position 1919.

The coin's first date of sale was on October 21, 1921 in Birmingham, Alabama, when President Warren G. Harding, an advocate of equal civil rights for African Americans, came to deliver a speech on that topic.

Nice blog with great details and history. I like the eagle on the design. I do not like any real person on a coin. As George Washington once said when asked, if he wanted his image on a coin, "patriot's died to break away from King's on coins".

I hate "revisionist" history. I am re-reading "A Brave New World" and was struck again by how highly prophetic it is. For things being done to our past now. In a summary it say" History is Painful. That is why we must study it". Thanks, Beautiful blog Your passion shows through my friend. A good thing!

Check out my extensive collection of Laura Gardin Frasers coins and medals, most with well-researched write-ups. https://coins.www.collectors-society.com/WCM/CoinCustomSetView.aspx?s=19449

Thanks! I will for sure

"The quote attributed to writer & philosopher George Santayana, in it's original form reads, "Those who cannot remember the past are condemned to repeat it." Editing history in the form of removing things gains us nothing. We should remember that our history is full of shameful and morally corrupt actions, as well as examples of many going above & beyond for their fellow man. While some of the coins from that time can stir memories that are abhorrent to many, we as members of the Numismatic Community must set the example by an appreciation of the beauty of the coin, without approval of the actions of the time. Thank you for the walk through history Bama.

Great coin and blog. It's a coin I have always liked but didn't know much about. Thanks for sharing.

I love the eagle, it is now my new favorite portrayal of one on a US coin. I thought all comes were issued and sold at least close to when the even happened, two years is a bit long. Collectors must have been waiting for ages. Thanks!

I thought so as well. Even then government apparently moved slowly

Thanks for sharing your research on the Alabama Half Dollar. I find it curious they were able to sneak a living person on the coin, that seems like a no no to me. In any event, I learned some things and that is always good!!!

I need to get a couple of these old commemorative half dollars. Every time I see a story on one of the old half dollars, I want one. These one is a great one to have. Thanks for posting and would sounds like you had a great experience in Alabama. Like hearing about what people did and the stories they have. This medal is great.

Some of them are really nice. I like the old ones a lot more than the new. I only got interested in them about two years ago when I bought the Stone Mountain commorative

That is a nice coin you should get it graded.

Wow, thats one heck of a coin my man... and a GREAT story to go with it! This is what makes this the best hobby in the world.

That's very interesting. I enjoyed a great deal. There is history I just learned. Learned about the coin. That's the type of blog I like. The ones I learn from. My tokens have a simple flag. It's the flag of St. Andrew. He was crucified and they have the cross exactly like this one it's the flag of Scotland. History is great but we learn it from the coins. You did a great job on that. Thanks for sharing.