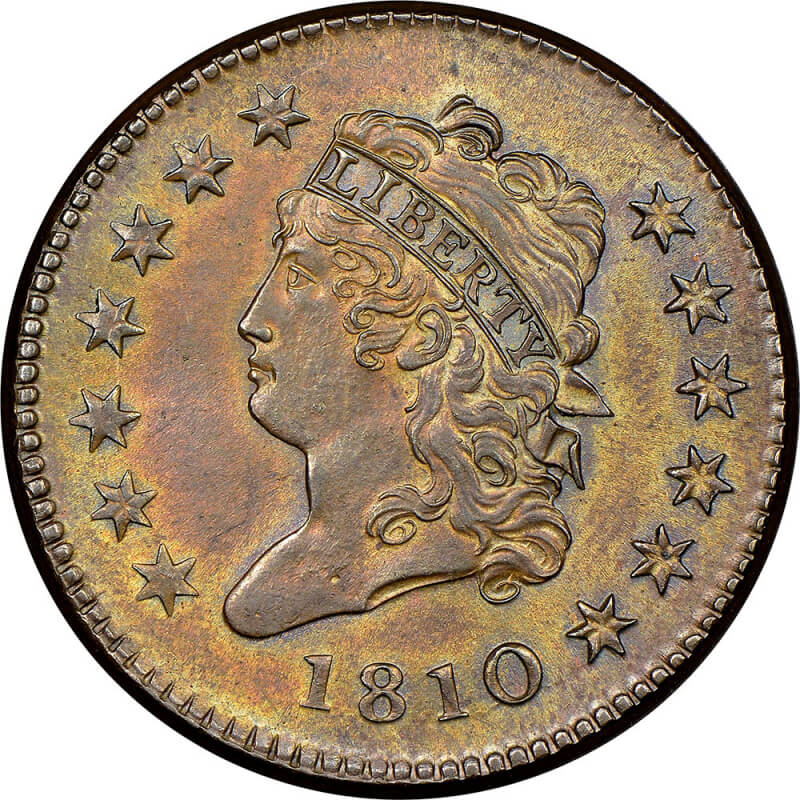 17 Mar 2021
The History
The history of the Classic head Large Cent is a very interesting study.  It all started with the war of 1812.  The war was fought between the United States of America, the United Kingdom, and Ireland.  The United States declaration of war was signed by James Madison in June of 1812.  During the war Royal Navy captured over fifteen thousand American  citizens.  Because the United Kingdom was at war with Napoleon, they had to rely on their navy to fight the United States.  Since the navy was the United Kingdoms only option they started blockading trading ports.  Another way the United Kingdom fought was with Native Americans.  They gave the Native Americans guns and in return the Native Americans would raid English settlers.  A notable achievement that the United Kingdom achieved was reaching Washington D.C.  this happened in 1814 and not only did they burn the Whitehouse but they also burned the capital.  Finally on February 18, 1815 the war ended.
The CoinsThe Classic Head Large cent also known as the turban head large cent is an amazing coin.  The coin's obverse has a depiction Liberty with long curly hair thirteen stars and a band that runs across her head saying LIBERTY.  The reverse is a wreath, around it are the words  UNITED STATES OF AMERICA  and inside of it is the denomination in this case ONE CENT with a line under it.  John Reich was the engraver.  Reich was born in Germany in 1768.  Reich's father was an engraver so he taught his son.  Originally John Reich designed medals.  It wasn't until 1800 that Reich moved to America.  Once Jefferson laid eyes on John Reich medals he immediately gave him a job at the mint.  Although it wasn't Chief Engraver he was still satisfied.  A few years later the Chief Engraver Robert Scot was getting old and loosing his eyesight so Jefferson agreed to let John Reich be the Chief Engraver.  The Classic Head design was made for use on the large cent and half cent and it was in use from 1808 to 1814 for the large cent and 1809 to 1836 on the half cent.  Another employee by the name of William Kneass improved the design more to his liking and his design was put on the Half Dime, the Dime, the Quarter, the Half Dollar, the Gold Quarter Eagle, and even the gold Half Eagle.

Collecting The Classic Head Large Cents Because of the war of 1812  we could not get copper planchets from England.  So the company's that made them were not as good as England which resulted in more metallic impurities in the planchets.  This makes collecting them difficult because the impurity makes them wear a lot faster.  The Classic head design has a couple overdates.  These being the 1810 over 1809 the 1 and 0 of ten have some different marks under and above them.  The 1811 over 1810 is fairly easy to spot because there is a good size circle over the last 1.  And then the last one the 1813 over 1812 this overdate appears that the middle and top of the 3 are almost connected.  The key date states "A Guide Book of United States Type Coins" is the 1809 although not rare it is still a scarce coin.  I don't know if many of you know this but I have been reading lots of Q. David Bowers books and one thing he says in pretty much all of them is that you can cherry pick coins by how good they are struck.  These Classic Head large cents are a very good example.  You can buy a week struck one and it will probably stay about the same value.  But if you find a sharp strike your coin might be able to sell for more.  That is about it and if you have any questions just put them in the comments below.

Thanks for the info

I like the coin, just not a collector. They certainly are beautiful though. Thanks for this blog.

Thank you for the info. Really a very striking coin. I love the darker chocolate coins. I always learn something from these blogs. Mr. B

Thanks for the great overview! I just concluded writing a chapter on Large Cents in my book. Wonderful history.

Very cool coins indeed! Thanks for all your research for your blog! ; )

A bit too pricey for me. I do have a couple and enjoy them. Thanks.

I've never really delved into collecting large cents, but the last few blogs about them are piquing my interest in them

While I have three or four of the old Large Cents, I stopped short of pursuing them since most at a price range I was comfortable with were dark and hard to see unless under a strong light source. Things have change since then, so perhaps the time has come to start buying better grades.

Knowing about the strike and coin is very important. Finding well struck coins will pay off. Like the large cents. Thanks

A very attractive design, for sure.