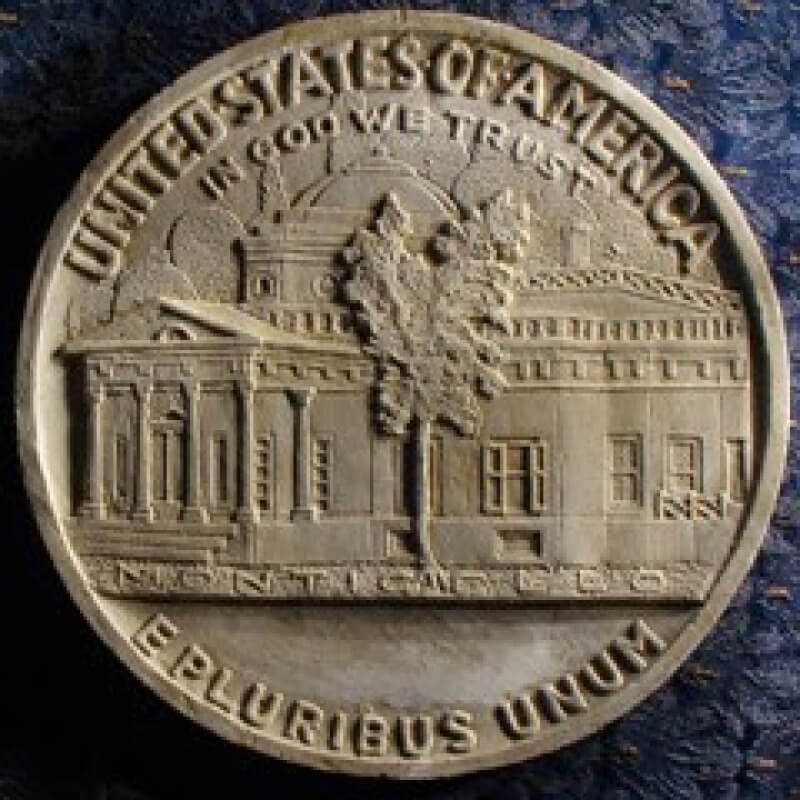 With the release of a West Point (W) mintmark, in three finishes, a first ever in the 82 year series run, this weeks blog topic touches on the creation of the collectible Jefferson Nickel. No other currently struck series has had more design changes, seven in total. With four finishes and four mintmarks. Not to mention numerous varieties and errors, this series offers collectors many possibilities. A series which is fairly easy to complete in mint state grades on nearly any budget. If you haven't, why not start a collection today?   Enjoy!

To understand how a new nickel, and Thomas Jefferson's name attached to it, exists an examination of the years leading up to 1938 must be addressed. From the beginning, in 1913, the Indian Head (Buffalo) Nickel had been plagued with striking problems. Much of the detail, particularly that of the Indian's hair and the horn of the buffalo, had been lost primarily due to the hardness of nickel as a metal. Dies rarely lasted long, often breaking in the process. As the mint tried numerous times to refine these characteristics, or lack thereof, over the years this only compounded matters with even further stresses. With mint officials frustrated and wishing to redesign the nickel all together, little could be done without an act of Congress. Contrary to our current belief towards the Buffalo Nickel, the general public at the time found little enthusiasm in them as compared with today. As 1938 approached, whether the desire came from Mint Director Nelly Taylor Ross or then Secretary of the Treasury, Henry Morgenthau, Jr. to apply the Coinage Act of 1890 for a complete redesign, remains a mystery. That act clear states in section 3510 that the United States mint and the Treasury Secretary may, after 25 consecutive years, change the design of coinage without Congressional approval.

And so, in January the mint began a nation wide artist competition to design a new nickel with the winner receiving a $1,000 prize. German born Felix Shlag would win the competition with designs the newly elected President, Franklin D. Roosevelt highly praised. After all, Roosevelt was a tremendous admirer of Thomas Jefferson. While the Commission of Fine Arts approved his designs, the mint was somewhat reluctant. As trial pieces were being struck, by July, the mint had modified the reverse from it's three-quarter view to a more straight on and removed the palm tree, which they felt did not belong. As such, this popular collector series has endured nearing a century as it is highly unlikely to be retired any time soon.

As for myself, I have a complete 1938 to current business strike set and near complete mint set/proof set run. Lacking only the matte proof found only in the 1997 Botanical Gardens Coin and Currency set. What do you have?

Really nice set to collect. Working on a slabbed MS66 set with my grandson. Also getting him into $2 Jefferson notes.

I did forget one thing. The b West Point Mint made coins for us for years and years befote it became a mint of the United States. They didnt out the mint mark on but there out there been out there for what twenty years they put the mintage in with Philadelphia Denver anywhere. I call them the lost coins of the West Point. There hasbto be a way to find out . The freedom of informations act. That how they dound the other xoins. Ut webstill wouldnt knowmwhixh ones just the added mintage. All these dirty little sexrets.

That's a nice looking nickel you have there John ! I also have quite a few nickels, but they are all raw coins. I have a roll of Buffalo nickels I haven't even opened and a few that my granny Boone left to me which I have put in card board flips. I'll have to post a couple on my blog to get your opinion on ! I hope the current crisis don't delay my silver proof set that's supposed to be released in April , then I will own the new W mint mark nickel also ! Great post, it's made me start thinking about nickels more :-) ! Take care and stay safe ! CharlieB aka slybluenote

Never did try to complete a set of Jefferson nickels. I have a few 1950-D a couple nice war nickels, and a couple other nice graded Jeffersons.

Upon reflection, I stand corrected. I knew I could always count on you.

Always preferred the original Shlag reverse, shame the mint never brought it back.

I never much admired this series, other than the war nickels. You make it sound exciting. I am going to take another look at them. Maybe if they were silver more people would collect them. Thanks.

You have to love these coins. I have the complete set waiting for the uncirculated and S mint in the Dansxo albums . I like.the design the designer but i yhink there underrated that should not be. There a work horsenin circulation. Andbthey haveba xouplemworth a xuplemof bucks. I also have them in slabs from 1999 to 2019. Plust the Buffalo nickel his name Black Diamond and three indians fighting for fame. Great coin great blog good set.

Collecting Jefferson nickels is how I got started collecting coins. When I was 10 years old, I traded a model car for a 1950-D in fine condition.