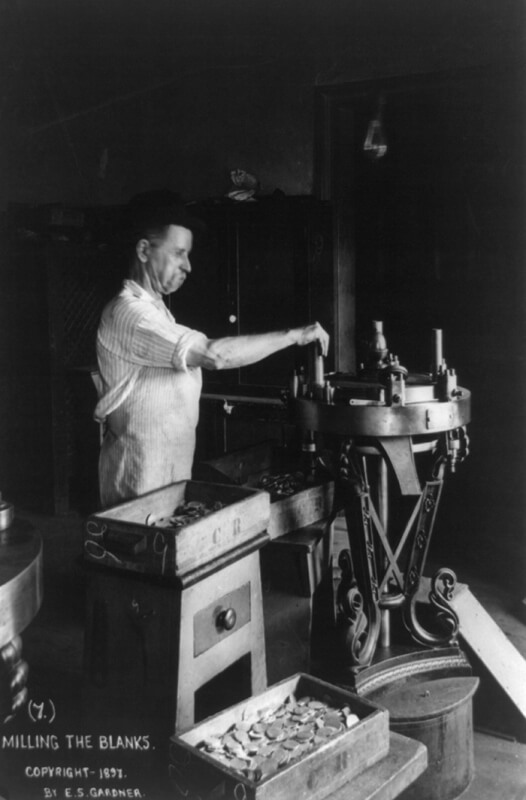 New Orleans has long been a major shipping and commerce hub of The United States. From early trappers to  it's founding in 1718 by the French, a short-lived rule by the Spanish following the Seven Years War then back under French Authority for one final year before the Louisiana Purchase in 1803. As the young nation and it's newly acquired vast land mass expanded, with foreign bullion flowing through it's ports destined for the long journey north to Philadelphia, the need for a new mint became obvious. So I chose an in depth look at my person favorite of the branch mints. New Orleans.                               Enjoy!

Despite being the 5th largest city in The United States during the mid-seventeenth century, New Orleans processed more trade than any other city. The origin of the mint began with President Andrew Jackson using his veto power to prevent the re-chartering of the Second Bank of The United States in New Orleans. The U.S. government conceded making New Orleans a branch mint on March 3, 1835. President Jackson's Executive Order requiring all land transactions to be paid in cash, combined with existing fiscal policies and an economic depression occurring, the Panic of 1837 created the need for more coinage. With gold being discovered in Georgia and North Carolina, two subsequent mints at Dahlonega and Charlotte respectively opening in 1838, the mint at Philadelphia could not dispense silver coin quick enough or in sufficient quantity required for commerce in the deep south.

The location of this new mint, in the northeast corner of the French Quarter, by architect William Strickland, saw construction begin in 1835 and finish in the fall of 1837. Built of the Greek Revival style in red brick, minting operations began on March 8, 1838 with receipt of bullion from Mexico. Since all working dies are created at Philadelphia, an occurrence which continues to this day, it wasn't until April that they arrived. The first recorded coins struck were 30 dimes before trouble with coining press arose. Over the coming months, through trial and error from repeated equipment breakages, production came to halt in early summer with an outbreak of Yellow Fever forcing a closure. Weeks turned to months before the presses resumed striking in late October. With the year almost over, only two denominations were coined for circulation. The half-dime and dime. In spite of the setbacks, the New Orleans mint struck 406,034 dimes, of which 3600 were in January of the following year when new dies arrived.

1938 offers collectors two distinct rarities bearing an O mintmark. The Seated Liberty half-dime saw a design change during the year, from a no stars obverse to one bearing thirteen. The dies which arrived at New Orleans in May were of the original, and approximately 70,000 were struck making this the only issue of the subtype. Nearly the entire run saw heavy circulation making mint state examples hard to find not to mention expensive. The second, one highly sought after and surrounded in mystery, was the Seated Liberty half dollar. With the same problems surrounding the dime in it's early striking, along with the shutdown imposed by fever, the two smaller denominations drew the greater need for commerce once production had resumed. Still, half dollars were needed. Much like the dime, these were reportedly struck in early 1839 while awaiting new dies. Twenty were recorded as being struck, in proof only, with around twelve accounted for.

If equipment failure and fever weren't enough, a much more pressing matter loomed on the horizon. In deciding on the location for the building, William Strickland made an ill choice as the high water table surrounding New Orleans made soil swampy. By the late 1840's major structural damage had occurred, magnified by the heavy equipment used for coining. So severe that by 1854 Gustave Touton Beauregard, the future Confederate General, was charged with the repairs. A Louisiana native and West Point graduate with a degree in engineering set out by rebuilding sections of the basement's arched ceiling. New masonry floors were laid and tied in with the iron reinforcement bars from earlier repairs as support for the structure. Around this same time, the old heavy equipment was converted to steam power necessitating the addition of a smoke stack to vent the fumes created.

Production at the New Orleans mint ceased on January 25, 1861 the same day in which Louisiana seceded from the Union. A secession convention held three days later allowed for federal employees to remain however, their employment was now under the authority of Louisiana. Finally, in March, production resumed with the striking of 2.5 million1861o half dollars.  Surprisingly, unchanged in design while under  Confederate occupation. Which brings into being two more rarities for collectors to pursue. The Confederate half Dollar, of which four are known, bears a shield and wreath reverse with "Confederate" replacing "United". The second being a CSA Obverse restrike, identical to the normal issue with exception for a die crack from Liberty's forehead extending to the dentils.  Production would stop yet again in April of 1862 when the bullion needed ran out. By the close of the month the U.S. flag would fly over the facility with Admiral David G. Farragut having captured the city and the mint. When William B. Mumford, a steamboat gambler, tore down the flag and ripped it to shreds, General Benjamin Franklin Butler ordered that he be executed. He was hung horizontally on the flagstaff outside of the mint on June 7.

Having sustained damage during the war, the mint did not reopen until 1876 albeit as an assay office. Minting operations would not return until 1879 striking mostly silver coin including the popular Morgan Dollar. The final coins struck came in 1909 with the Treasury cutting funds forcing the mint to decommission it in 1911. Once more, the New Orleans mint was down graded to an assay office before being converted to a prison in 1932 and lasting until 1943. The Coast Guard took over the building using it as storage before abandoning it altogether a few years later. The former United States mint sat deteriorating and slated for demolition until being saved as museum in 1978.

The following denominations were struck at New Orleans.

I only have on old Dollar from New Orleans, but wowser, the history. Thanks for the well put together blog, I rather enjoyed reading it.

Thanks for the history. An important segment of our history. How do you hang a body horizontally?

Love the history of NOLA's mint, thanks for sharing your knowledge and research with us.

Too bad there we don't have this mint any more.

They were not a very well organized mint, and coins bearing the mintmark are evidence of that. They broke dies much more frequently than any other mint.

The New Orleans Mint for the years it was in operation was very much needed and has a colorful history. In order for the US Mint to comply with the terms of the Bland-Allison Act, the New Orleans mint as you point out got a new lease on life in 1879. I read that the weaker strike on Morgan Dollars had to do with different die-settings than that of the other mints, probably in hopes of extending the life of the dies. As a collector of Morgan Dollars, there are several dates with colorful histories of their own. The 1903-O was at one time considered one of the rarest issues until a hoard of them were discovered in treasury vaults. I hope to visit the New Orleans Mint someday if for no other reason than to absorb its history.

That great mint got a bad break with there coins. Especially Morgan's such have a very weak strike. It was shot lived thanks to the civil war. I always learn from you and I did pick up something today. As always thank you I appreciate it.

Thanks for writing about this mint. I'm not sure the museum there is all that. They have a display but It's also the Jazz museum. I think it's a real pity too that we haven't preserved our branch mints and made them dedicated museums of numismatics. I took a quick peek at Carson City and Charlotte. They have displays but are otherwise non coin museums as well and Dahlonega mint was bought by a college and turned into a dorm. One would think they would have been extensively preserved

Could not agree more on the subject.