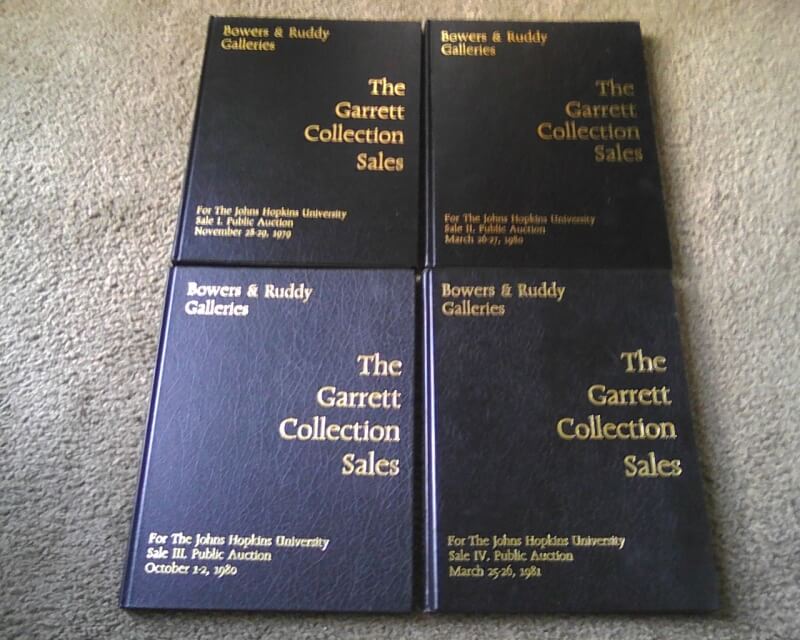 31 May 2017
From November 1979 to March 1981, Bowers & Ruddy Galleries dispersed the collection of T. Harrison Garrett. (Bower & Ruddy Galleries pre-dated the  Stacks/Bowers of today) The sale of Garrett's holdings was considered a big deal back then, and included numerous rarities. A Brasher Doubloon even set the world record for the  price of a coin in 1979. Aside from the typical softcover catalogs, a set of hardbound catalogs were also available. I found these years ago on the secondary market for well under $100. I considered them special because they capture the essence of a great 19th century collection, and are useful when you see what was being collected at the time (and what was not). Also available at the time was a companion volume, "The History of United States Coinage, as told by The Garrett Collection", also from Q. David Bowers.  My favorite lot of the entire collection remains to be Lot 1199. It was a Sommer Islands (Hogg Money) Gold "Pound", which was sold to Garrett by dealer Lyman Low in 1884. Low touted the piece to be genuine, while today we know it was a bad fantasy piece. It was even struck to imitate wear. Garrett purchased it for $500, and whether Mr. Low was ignorant of the piece or in on the con, remains unknown. It just goes to show any collector can be ripped off, so buyer beware. (The "coin" sold in October 1980 for $1250. Wonder where it is today?)

great little library you have

Beautiful books. I enjoy seeing what coins sent for back when. Also, as you say, what was deemed to be worthy of interest. Thanks!

Wish I had these books. You are a nice treasure.

Those books are special, great reference books. As for the gold hogge, I wonder if it was melted for the gold value?

Hogg Money is one of my favorites to read about. I will never own one. Thanks for giving me a new place to look.

Very nice pick up. I like the books. As far as anyone being ripped off you don't know how right you are. I read a blog where the ANA coin museum was robbed. They caught the guy. But one never knows. Just wrote a blog on security. I think I have written three. Keep good care of those books there beautiful thanks for the write up. Mike