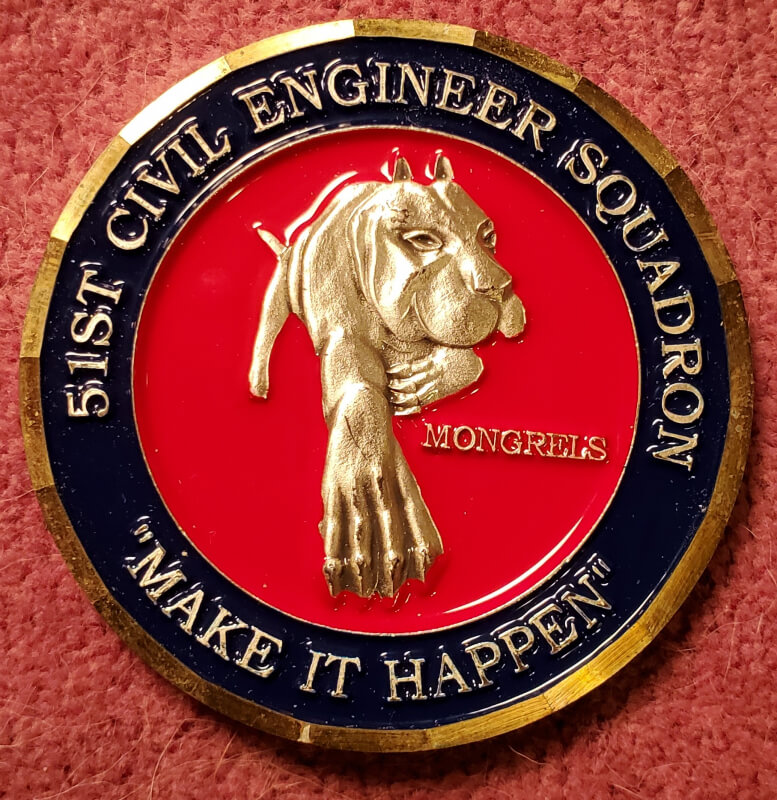 My wife and I were visiting a friend this weekend and she's close to retiring.  She recently rotated back to the area from five years in Korea, She has spent a total of 11 years in Korea and the Pacific Theater.   When conversation rolled around to hobbies, she gifted us some of her old military/unit coins.  She felt that my wife and I  would cherish and take care of these coins and she is seriously downsizing.   When I told her that I intended to share with you guys and gals she was pleased.  She gave me Nine coins, I thought I would share three.  I just randomly selected em, the rest are as interesting, I could post the others at a later time, I will leave that up to the future.

1.      The Seventh Air Force (Air Forces Korea, 7 AF), is a Numbered Air Force headquartered at Osan AB, South Korea, (ROK) part of Pacific Air Forces (PACAF).  Established in Oct 1940 as the Hawaiian Air Force and as such was a United States Army Air Forces unit in World War II.  It flew and fought in all major Pacific Air Engagements during WWII, including Pearl Harbor on 7 Dec 1941.  The unit returned to Hawaii as a Defense Air Force after WWII, it became the primary USAF Command and Control organization in South Vietnam during that War.

2.       51st Civil Engineer Squadron is one of five squadrons, part of the 51st Mission Support Group, 51st Fighter Wing, Osan AB, ROK.  They are responsible for Explosive Ordnance Disposal, Fire Emergency Services, Housing and Environmental Services, Chemical Warfare Section and Operations which takes care of the base facilities, security of personnel, facilities to include all aircraft assigned to the Base.

Obverse; 51st Squadron Mascot a "Mongrel" in center on a red surface, with the legend' '51ST CIVIL ENGINEER SQUADRON" at top, and "MAKE IT HAPPEN" at bottom.  Reverse; "51st Fighter Wing" at top, "Osan Air Base, Republic of Korea" at bottom, "PRIDE " above, "51st Civil Engineer Sq", surrounding the unit Civil Engineering patch.

We are proud to have been given the honor of preserving these coins.  They will be placed back in 2.5x2.5s and labeled with the information listed above as well as her personal information.  They will hold pride of place along side the collection of our own military tokens and coins.  Just wanted to share these beautiful coins.  We sincerely hope you enjoy seeing them as much as we do.  Later!

These are wonderful! What a great friend. Thanks for sharing them with us!

Ah, the memories! This post reminds me of my Navy days as a crew member aboard a destroyer assigned to Destroyer Squadron Thirty-One. This prompted a brief internet search triggered by you, Stumpy. Today, I found out that my squadron, which was assigned to San Diego, moved its homeport to Pearl Harbor in 1991. While on a Western Pacific cruise (WESTPAC), my ship, the USS Elliot DD-967, served as the flagship of the Commodore of Destroyer Squadron Thirty-One, John M.. Poindexter. If that name sounds familiar, you're right. Rear Admiral (Two-Star) Poindexter was one of the main figures charged in the Iran-Contra incident. I tried to find a squadron medal on e-bay and only found patches. I'll have to keep a lookout. I did find a coffee mug, though. The following is a link to a listing for an embroidered patch of my squadron. https://www.ebay.com/itm/5-NAVY-DESRON-31-DESTROYER-SQUADRON-THIRTY-ONE-EMBROIDERED-PATCH/303447491796?hash=item46a6e144d4:g:3gcAAOSwcrJeH9bL

Thank you for sharing. The military does an excellent job designing numismatics items, even if that's not what they intended. Between these medals and the MPCs, you can have a wonderful collection just by joining the armed forces. My grandfather served in Korea during the Viernam war.

I didn't measure them, but they are slightly larger than a Morgan Dollar, they fill a 2.5x2.5. When I get home I'll measure em. Thanks.

These colorized metals I like. I have a close friend that likes anything about military planes. He flew B-52's during the Vietnam war.

Great collection. My dad served in the Army Air Force in Italy in WWII. Those are awesome. I hope you share the rest with us. Thaks to all who served. A nod to you.

Wow. What a beautiful and heartfelt gift! I love the history behind them, and know that you will cherish them for forever! Cheers, NM

Wow, A command Sargent Major! Bet she was a tough lady! I enjoyed seeing those, thanks for the blog Stumpy

Very nice coins. I personally like the third one the best. How large are they? Thanks for the update!

Love the Challenge Coins, used to have a few myself but I gradually gave them away to friends who were actually actively collecting them. Thanks for sharing, your friend had a fantastic career.

I never served. I was serving God at the time. In the seminary My two friends went made it back. But it was in a box. I like challenge coins there are a bunch on ebay. I would buy a few but I didn't serve. So I just cant. It doesn't feel right.. Great blog my friend. Beautiful challenge coins. Better story!

Beautuful items. That is nice she gave them to you to preserve and hold for the future. Thanks for posting.

NICE looking challenge coins you have there Stumpy! I have heard the one motto "Ready to Fight Tonight" ! I've also heard the one "Make it Happen"! Who wouldn't be proud to display these beauties? Great pick up and great post! Talk to ya soon buddy!