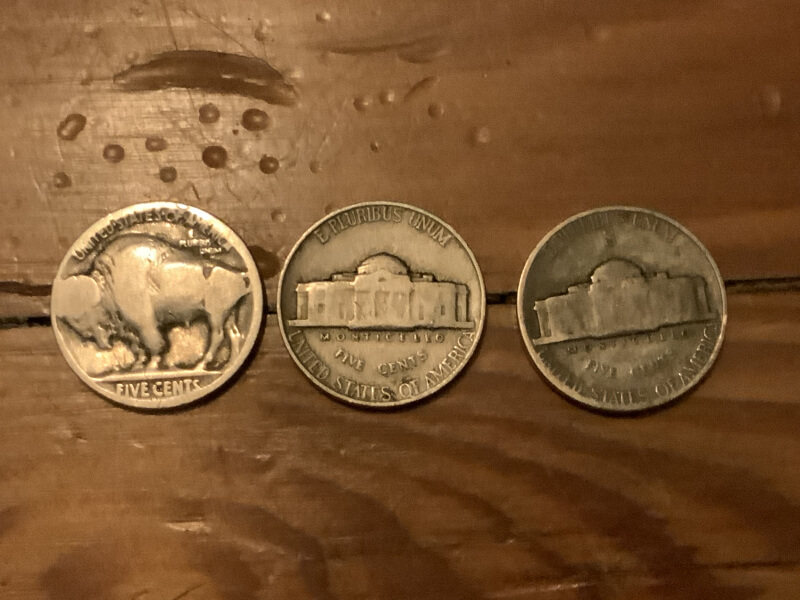 Boy, have I got a blog for you! We've got roll searching, coinstar, metal detecting, and a very epic beach to boot! Let's hop right into it!

First of all, coin roll hunting was OUT OF THIS WORLD this week. I searched $600 is dollar coins (I'm to lazy to do the math on this one), a little more than 100 nickel rolls, 10 penny rolls, 6 quarter rolls, and 2 Dime rolls. I get tired just typing it. In the dollar coins, I found 8 NIFC Sacagweas, a ton of upgrades for my presidential dollar set (I now have every circulating president in Philadelphia and Denver mint besides James Polk in Denver) and 13 NIFC president dollars. In the, "100 nickel rolls," highlights include two silver nickels (1942 scratched of mintmark, and 1942-S), and my first Buffalo nickel found roll searching! That takes my count of Buffalo nickels in my collection to three. In the cent rolls so far (haven't started searching for errors on these rolls, so I still have them), I found one 1920 wheat cent, which is the oldest coin I have found in rolls AND in circulation thus far. The quarter rolls have produced nothing yet, but I will keep you posted. Same thing with the dime rolls.

So, while I was at one of my banks, I checked their coin machine (basically Coinstar, except in is not brand name, and doesn't charge you for using it), and over the course of the week, picked up three coins: A 100 colones coin from Costa Rica (2007), a 5 euro cent, another Canadian dime. Pretty good for the past week.

Metal detecting is something I haven't really talked about in my blogs, but I had some cool finds at a beach, and can't wait to tell you about them. First of all, I metal detected my yard, and found a old toy car that used to come in those Cheerios boxes (YNH, be warned. It might bring back some memories). Then, my brother went to my backyard and detected there. 7 minutes later, he comes running in with a dirt incrusted Lincoln cent. After a little bit of cleaning, we found out it was a 1983. At at a beach by a lake, we found two dimes, two Lincoln cents, two rusted nails, and a gromit. I was packing up my detector and getting ready to hop in the cool water when a guy walked up to me. He said he had used his Garret AT Pro a few times on the lakefront, and even found a merc (Mercury dime). He wanted to know if I wanted to detect a little more with his detector. I was thrilled, because Garret AT Pros are the best on the market for coin hunting, so I said yes. A few minutes later, with his help, I found two more Lincoln cents (1986 and 2000-D). I thanked him for his help and time, and headed home. I will DEFINITELY be back (I really want a merc dime).

So, that's my update, a lot of information, so I hope it wasn't too long.

Your hobby activities kept you busy

You are the luckiest coin searcher I think we have on our site! Good for you! I always enjoy reading your blogs! ; )

Thanks for the encouragement! Love your blogs as well!

Sounds like you have been having a lot of fun! Good for you!

Yup, it’s been fun. Numismatics is all about the hunt for me.

Yeah, I don’t know why I missed that. I think I was just tired yesterday. Thanks for help me save that minuscule amount of brainpower.

I have a few of those 1943 cars from cereal boxes. Still in wrappers ! I always like cereal that has items in them.

Very nice finds. Thanks for sharing your coin hunting news. I like seeing the finds. I recently bought 5000 wheat cents from my local dealer this past week. Figured mostly 40's to 50's which is fine. They will be for YN's at coin shows. I am about a third through the 5,000 wheats and have pulled out at least 3 rolls of 1910 to 1930 dates with some mintmarks. Must have half a roll of 1910 so far. I think every P date starting with 1910 has been found. Plenty of 1919. Might do a count once I an done and post the results.

Whoa! Let me know which shows to be at. Just started a new Whitman folder of those buggers…

You lucky little xxxx guy. That was a nice guy to let he use the top of the line detector. he i8isn't a dealer is he? Carry on. Thanks.

What are the chances! I to have a presidential dollar folder that I have filled from circulation. I am only missing one of the circulation strikes. Can you guess which one? James Polk Denver! It must be really rare or something.... I plan to order a dollar coin box one day, maybe I get 'em then.

Yeah, beaches are the best because the digging is easy, there are a ton of people to drop stuff, and over time, as people are in the water, their fingers actually shrink, leaving their rings prone to falling off!

Interesting… thanks for letting me know!

I have tried metal detecting at the beach 2 or 3 times on vacation. Unfortunately, my metal detector (bounty hunter) can't take it, it doesn't beat at anything! I will have to get a new one eventually and hopefully try it out at a beach on my next vacation.

Hate to be a bearer of bad news..... but that 1942-P without a mintmark isn't silver. They made some 1942s earlier in that year that weren't silver. Anyways, great blog and great finds!

Like I have always said you never know where you will find coins. Well done keep your eyes open. !!