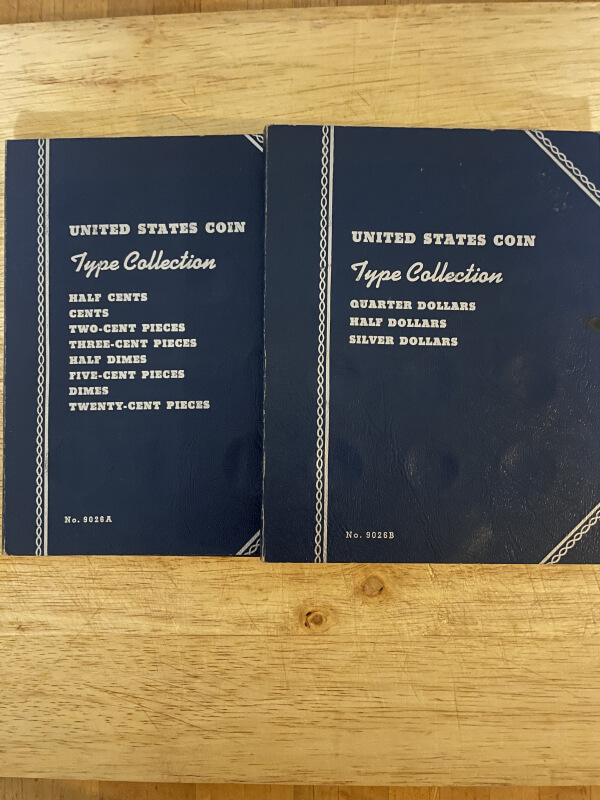 You don't see many of these anymore. A lot of people have the Type Set of 20th century coins. I also have one of those, COMPLETE. This specific set seems to be somewhat of a rarity though. I found these two old Whitman folders in a lot of stuff that I purchased when we had our own shop. Decided to gradually try to complete the set. This will be somewhat of a daunting task. There are 46 slots in the first book, as well as 8 more that are filled, and marked "Rare". The 2nd has 31 slots w/ 1 "Rare". I have the majority of the coins to fill them, already in my collection, BUT I decided to purchase additional specimens of mostly better dates and/or higher grades. That's why I say I will "gradually" try to complete it. Some I may never own (Besides the rare ones.) because they are fairly pricey. The photo included of the coin, is my most recent addition. I'm pretty proud of this one, since it is the FIRST and ONLY Trade dollar that I own. It is an 1877 S. As near as I can figure since I have limited information on grading these, it would come out somewhere about an EF40. Hope that you enjoy it.

You don't see many that are filled. Its very hard!

I haven’t seen many sets like that at all. Most are just 20th century sets, and I’ve got one of those filled.

I have a 20th-century collection folder from Littleton and it is almost done. ( still a noob)

The whole collection is posted as a blog. 😺

Thanks! Since I can’t get the site to work right, I’m working on a blog that I’ll probably get posted later this evening. Nothing special, but I really wanted to show the WHOLE collection, but couldn’t get more than 1 picture to show in collections.

You did very well and that's a great collection. Keep working on it you will get it. That's a complete set. As I always say never give up. ! Good job my friend!!

Thanks Mike! I might finish it, if I live long enough.