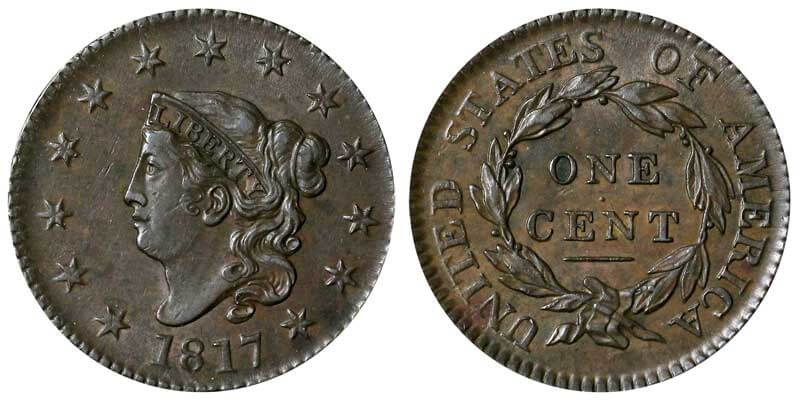 The Coronet Head cent was minted from 1816-1839, at the Philadelphia mint. It was mostly made of copper. The U.S. mint bought copper planchets from the English supplier Boulton & Watt of Liverpool. When the war started the manufacturer stopped and the last of the blanks were made into â€śClassic Headâ€ť cents. Without any blanks, the mint was able to engrave a new obverse. The mint had been criticized before for earlier designs. When the â€śClassic Headâ€ť was introduced critics pointed out flaws. One big flaw was that the fillet on Libertyâ€™s head was not worn by women in Classical times but was actually given to boy athletes who had won the town games. After feeling very embarrassed the mint redesigned the coin, now naming it â€śCoronet.â€ť

The Coronet was made for 24 years with 51,706,473 coins made. The Philadelphia mint made many different varieties of the Coronet. There were also many coins restruck with a later date. One very odd variety of the Coronet is the 1817, this coin year was odd because the engraver Scot had added 15 stars to the obverse of the coin. This of course is a mistake because there should have been 13 stars, which stand for the 13 original colonies. One theory for this is that Scot had punched the stars to close together and did not want to restart. You can probably agree with his decision because it would probably take months to make the time up. So instead of restarting he decided to add a few more and make it look even.

There are no extremely rare years, but the 1823 Coronet is a â€śkeyâ€ť date. This is because it is very hard to find in higher quality grades. Proofs are extremely rare though. The only time proofs of this coin were made was when they needed a presentation set.

When grading this coin there is a very simple method to doing so. This is because of how simple the coin itself is. Wear first shows at the hair curls and also on the highpoint of the leaves. When sent to be graded there are standards set by the â€śEarly American Coppers Society.â€ť This coin is mostly bought by numismatics for type set books. In 1816 the coin was using the latest mint technology, but by 1839 it was outdated. A new coin was designed by Christian Gobrecht, this coin was called the â€śBraided Hair Cent.â€ť The new cent was more detailed due to the fact that there was better engraving equipment and the engravers had gained more experience and knowledge. To conclude, the Coronet Hair Cent was an engraving accomplishment for its time and is still beautiful today.

Beautiful series.. I need to look into these more. Thanks..

Very nice coin. Great history thanks for that and the pictures. How much do they go for today it that condition? Thanks

I love large cents. Is the photo a coin that you own? If so, is a very nice piece.

TY for a well researched history, I need to get one of these.