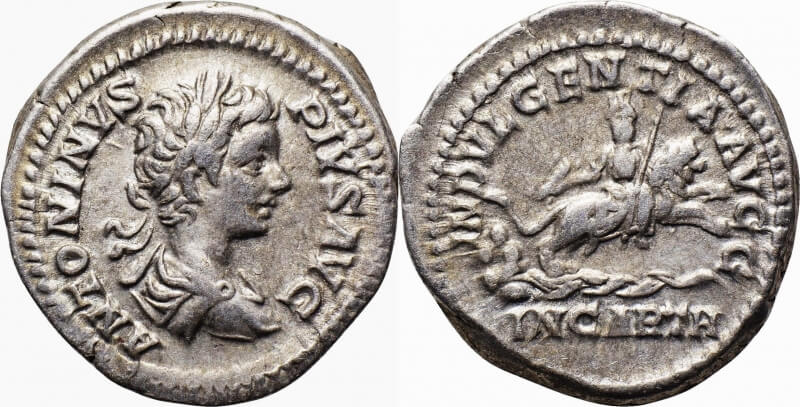 One of the most popular issues of Septimius Severus, which implies an optimum combination of numismatic attractive and relative abundance - at least as far as denarius refers - is the one that carries the reverse INDVLGENTIA AVGG IN CARTH. We will dedicate this post to know it a little more.

In 197 AD, the Roman legions, headed by their emperor, the african Septimius Severus, crowned a successful campaign against the parthian empire with the capture and sacking of the enemy capital, Ctesifonte. Thanks to this great victory the Roman Empire regained control of the mesopotamian area, which had been very disputed since its first capture by Rome, in Trajan's time, eighty years ago.

Concluded the fighting, Septimius Severus would provisionally set aside the armor and would engage in extensive administrative work aimed at reorganizing the entire Roman East, which, of course, included framing the new Mesopotamian province within this political-economic framework. Four long years passed thus, at the end of which the emperor considered that his work had ended in Asia and decided to move to Egypt. It was in the early months of 202 when Septimius Severus entered the great city of Alexandria: the principal city of Roman Egypt and the second city of the time, only surpassed by Rome in number of inhabitants.

During his stay in the great metropolis of the Nile, Septimius took several resolutions that affected the african area of the Empire. Among them we can highlight the demarcation of a new province: Numidia, whose territory until then belonged to the province of Africa. As a compensation to the affected province, Septimius provided with great largesse to its two main cities: Útica and the celebrated Carthage, capital of this province of Africa. The fact is that the emperor's generosity towards Carthage had to be especially prodigal to the point of being deserved of a monetary coinage by the Rome mint, which is none other than the one to which we have dedicated this entry. Let´s describe it below:

The translation of the legend on the reverse has no greater mystery: The Emperors´ indulgence (generosity) (Avgg = Avgvstorvm) with Carthage. The reference to two emperors (Avgg) alludes to the young Antoninus "Caracalla": firstborn of Septimius Severus and his co-emperor since 198. Nor is it difficult to interpret the figure of the goddess Cibeles (named in this coin with one of its main appellatives: Dea Caelestis), the main protective deity of Carthage, nor the lion on which he rides: a well-known allegory of the province of Africa. Specifying a little more, it is believed that the model of the goddess Cibeles appearing in this coin was inspired by a statue of the goddess that stood on the central spine of the Circus Maximus of Rome.

The present coinage is dated by RIC IV in the second half of 203 or first half of 204: shortly after the return of Septimius Severus to Rome from Egypt. This type of reverse would also be coined in the name of Caracalla: at that time a 16 year old teenager as reflected in his issue. As for the propagandistic objective of these emissions, it is evident: to make known to the Roman world the imperial generosity towards the city of Carthage.

The known benefits received by Carthage from Septimius Severus and the young Caracalla were the concession of the Italic Right (Ius Italicum) - which exempted the city from much of the taxes to be paid - the right to organize a periodic festival and the construction of an odeon for musical performances. However some authors, based on the information provided by this issue, have suggested another benefit: the construction of a new aqueduct for the city. This thesis is based on the schematic presence of a stream of water flowing from a sort of boulder, just below the lion on which Cibeles rides. Considering that there are some precedents in the roman coinage where aqueducts of recent construction are represented in an approximately similar form, the severiano aqueduct hypothesis can be considered plausible.

The city of Carthage, very grateful of the generosity of its emperor, adopted the nickname of Septimiana in year 202. Since then many centuries have passed, but the memory of those events is still alive in this issue that we have just discussed.

I am going to purchase a nice silver ancient at the next show I attend. I just need to do a little research and make sure I get a fair deal. Maybe I can even get my little bronze ancient attributed. That has been in my collection near 50 years. Thanks for stoking my interest in Ancients. It is an area I have always found a little intimidating.

Ancient coins collecting is a vaste territory, much more than other types of numismatic. But it´s also, in my opinio,n, much more funny. You won´t regret to collect ancient coins. I´m absolutely sure. Many people have began to collect "modern" coins and after initiated in ancients, but nobody has done the opposite,

Well written and researched blog. Well done. Thanks.. I look froward to more blogs from you.

Thank yo so much for your support, Longstrider. Our idea is to publish a post once a week. We hope to have you here again!

These coins are a piece of history in our hands. Thank yo so much for your support!

Thank you so much! We are happy to have discovered you new paths...

Thank you so much, Jim!

I have only a few ancient coins. Your blog is really interesting! Enjoyed reading it! Thanks for your research.

Thank you so much, Kepi, for your support!

This article is well written and researched. I know very little about ancients, and this educated me very well. I enjoyed reading, and the names are the most interesting to me. Pronouncing them seems to me as an enigma. Beautiful coin though. Do you know if it is Silver?

Yes, it´s Silver. About pronunciation, Latin is really easy: what you see is what you pronounce (with some exception): SEVERVS PIVS AVG is read Severus Pius Aug (Augustus); CARACALLA is read Caracala; INDVLGENTIA AVGG as Indulgentia Augg (The Emperors' indulgence / generosity)... I'm glad you liked it!

I enjoyed reading your work. I don't collect them but there 're only a few stories I have read. I love history and your story about this coin was very goo. Each one tells us a story that's what collectors have to understand. If I have a coin token or medal I never write a blog unless I do my research on it. That's how we learn. I picked something up today so that makes it a good day. Thanks for your research and history Mike 272

Thank yo so much for your support, Mike272!

I always find it interesting the stories ancient coins tell. I don't collect them, but these coins are sometimes the only recorded history available.

These coins are a piece of history in our hands. Thank yo so much for your support!