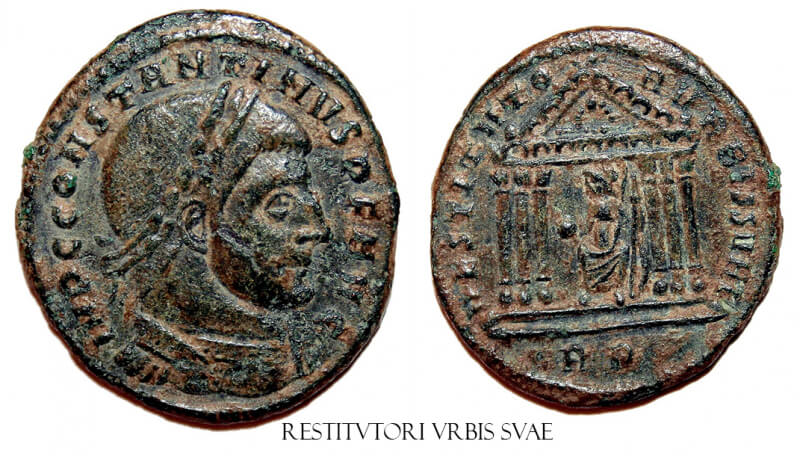 The first of these objectives was amply fulfilled ordering to dissolve the Praetorian Guard, by far the mainstay of Maxentius from the military point of view, and sending all their members to an uncomfortable destination in the cold and remote frontiers of German limes. Since the Senate harbored a deep resentment towards the Praetorian Guard - not for nothing it had been used too often as a tool of coercion and punishment of the ancient camera - this Constantine decision was especially held between Senators and won him many converts to their cause. On the second goal, theoretically more elusive in so far as it was not enough with forcing but needed to convince, Constantine immediately set to work, using all the means available to the highly developed Roman propaganda machine. Thus, his proclamations raised a variety of charges over Maxentius, calling for example perverter of the wives of senators, some of which, dishonored in his honor, hadn't found another outlet that suicide. Also was said Maxentius had made kill several senators in order to seize their properties, being as rapacious in their greed to accumulate possessions, including food, which had caused the famine in the city. This was not true since, while it is true that there were situations of serious famine in Rome, Maxentius was not to blame for them but the rebellion of Domitius Alexander in Proconsular Africa: the province where  was grown the wheat used to feed the huge city of Rome. So inflamed harangues seek to sharp to the height point the tyrannical character of the late emperor, reminding to the plebs the forcefulness with which the Praetorian Guard put down citizen revolts arose in response to the famine caused by the rebellion of Domitius Alexander. It was estimated at 6,000 the persons died under the praetorian steel, undoubtedly a reason more than enough to change the nickname "Protector of HIS CITY" -Conservator VRBIS SVAE--, as the liking of Maxentius, by other much worse: "Murderer of his city ".

Naturally, if Maxentius had been a tyrant, guilty of grave crimes against the people of Rome, was fully justified in applying one of the most classic "social" punishment reserved to the nefarious rulers deceased: the damnatio memoriae. Soon, therefore, the Senate (maybe more driven by fear than by the conviction) ordered to erase the name of Maxentius and his son Romulus of all inscriptions and removing their statues and busts.

In parallel with these actions in order to reduce the ascendancy of Maxentius over his old subjects, Constantine conscientiously applied himself in supplanting him into the heart of the Romans. Indeed, his deft mixture of persuasion and threat got, from the more pragmatic than idealistic Senate, the recognition for himself of the merit subsequent to the building of the imposing basilica and the restoration of the Temple of Venus and Rome. Further still, the docile Senate also agreed to erect statues of Constantine everywhere, including a gold one: really a hugely significant detail since this metal, the noblest of all, was usually reserved exclusively for the statues of the gods and not for those of the emperors, which were made in marble or bronze. Undoubtedly, Constantine was determined to portray itself as the "liberator" of the Romans who had terminated the terrible reign of the tyrant Maxentius. As such deliverer, Constantine had not come to change essence but to restore his dignity to the allegedly molested people of Rome. Rome was as "HIS CITY" as it had been of Maxentius (even though he had never been there before, at least officially), with the difference that he was not a tyrant but a just ruler who had returned ("restored") the city to the good order and the rule of law.

Unsurprisingly, Constantine did not forget draw on to the likely most powerful marketing tool available to a Roman emperor: coinage. So, the whole set of ideas described above was skillfully shelled in a super interesting numismatic coinage which we referred above and we are going to describe now. Formally, the issue is a obvious continuation of the last issue of Maxentius with the reverse of Rome inside a temple hexastyle. The intention of this issue is clear: while the obverse of the coin has changed (now Constantine appears in it), the reverse shows, in at first glance, that it is a coin made in Rome, by Rome and for Roma. There was necessary a second look a little more detailed to the reverse for understanding fully the message of the coin. Concretely, the user should read the reverse legends: RESTITVTORI VRBIS SVAE and LIBERATORI VRBIS SVAE, used alternatively in this issue, which identified without hesitation to Constantine as winner over the tyrant (Liberator) and restorer (Restitutor) of peace and justice in a city of Rome eventually recognized as his own, in the same way as Maxentius did on his issues. In the following pictures we can see two exemplars of these coins, each one with a different reverse legend.

Constantine just spent a little over two months in Rome. Right after consular games celebrated in January 313, the new western emperor left the Urbs accompanied by the bulk of its troops, leaving behind a garrison commanded by the prefect Rufinus. His stature as statesman results obvious considering as, in a very short space of time, he managed to revert the previous state of things, defined by the attachment between Maxentius and the city of Rome. Needless to say that, at the time of his departure, such an ideological transition, quite radical, shouldn´t be yet completed but certainly should already walk in the right direction. Proof of this, among other evidence, is the construction, ordered by the Senate shortly after, of the famous Arch of Constantine (pictured just above) near the forum. As for the Constantine issue with Rome inside Temple and reverse legends RESTITVTORI VRBIS SVAE and LIBERATORI VRBIS SVAE about we discussed above, everything seems to indicate that finished at the same time of Constantine´s departure, being continued by several other (in parallel or sequentially) with the reverse types commonly used by the emperor in the rest of their domains (MARTI CONSERVATORI, SOLI INVICTO, etc). This hypothesis, logical from a historical point of view --we must not forget that the reverse of Rome inside Temple was, after all, a design of Maxentius whose disappearance was convenient after reaching the purpose for which it was used-- is supported by the great rarity of the issue (in either legend variants), being known very few exemplars, unlike either immediately previous or later types, common in average. The fact that this issue was only struck in Rome and not in the rest of Italian mints, all of them under control of Constantine, is an additional argument in favor of its brevity and therefore low volume, conceived, according to all indications, for immediate consumption of the people of Rome as, indeed, it happened.

I am really starting to appreciate and love ancient coins. It is fascinating to learn the history of the time surrounding these coins. If only these coins could talk! Thanks for sharing this blog.

One coin tells a great story. I must pay more attention to ancients, after reading this. So much history

Beautiful coin! Your blog was wonderful! I really enjoyed your research and history of this time period. Thanks!

Thank you so much for your support!!!

Great history. I have the Maxentius of this type from Rome, as well as a few Ostian issues. but not the Constantine.

Fantastic research. Thanks for bringing it to us. The use of the coins to extend the history is great. Once again proof of the lessons one can learn from coins. Thank you! Now, I need to read that again.

Hope you can enjoy reading it again and again. Thanks for your support!

Your history on Constantine is impeccable. Along with that period in Rome. The matching up of the coin and the History of the day a great man is wonderful. I want to thank you for.your research and the beautiful coin. I have noticed that ancients I hate bringing value into this it seems to be getting much attention. In the hobby ancients with biuldings. So what you have done is use a great coin that justifies my collection centuries later of coins and tokens with buildings. Thanks for your work and great shots. Mike.

If it's true that knowledge gained must displace old knowledge, then I just lost the entirety of 1973. Thank you for that primer on Roman history.

Wow, lots of information here on just this coin. Thanks for the research and time.