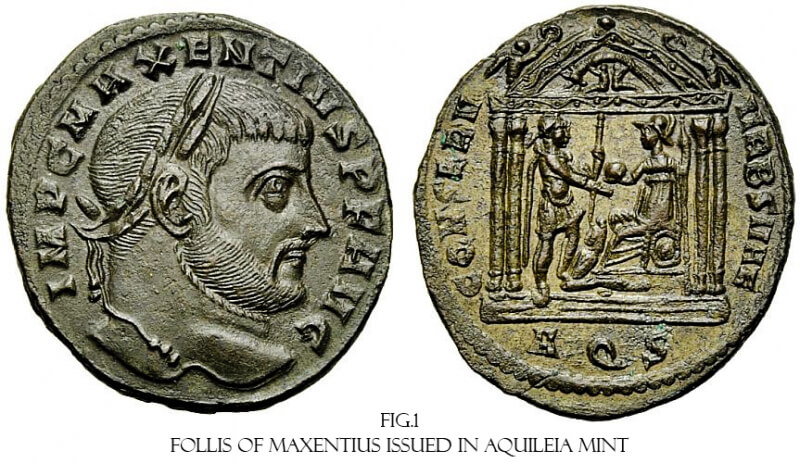 This battle faced the famous emperor Constantine, formal Caesar of western -although Augustus in fact since the death of Severus II in 307--, and the murderer of the latter, the usurper Maxentius: son of the old western Augustus Maximianus Herculius and self-proclaimed emperor in Roma in 306, counting among his dominions the Italian peninsula, Sicily and Proconsular African province, this one specially valuable for its agricultural wealth. At stake was nothing less than supremacy over the pars occidentalis, the western half of the Roman Empire, which had been in doubt almost from the moment of the death of Constantius Chlorus in 305: father of Constantine and the last of the "legitimate" western Augustus, in the sense of proclaimed under succession system designed by architect tetrarchic system, the great Diocletian.

Although the strength of numbers favored Maxentius, who led an army of about 80,000 soldiers compared to just over 40,000 which ranked his rival, the truth is that Constantine got the victory.

Leaving for a more detailed work possible supernatural divine intervention ("in this sign conquer"), it seems reasonable to hypothesize as ultimate causes constantine´s victory both serious tactical errors committed by Maxentius (leave the river behind him, with a fragile temporary wooden bridge -the Milvian had been disabled a few days before the battle, as the only way to escape the city at a pinch) and the difference in quality between the troops of both armies: hardened and disciplined frontier legionaries in the winner, poorly disciplined hardened praetorians with the support of well-armed but little experienced roman urban cohorts in the defeated one.

Like many of his soldiers, Maxentius drown crossing the Tiber river in a desperate attempt to protect himself within the powerful walls of Rome that seemed so distant now that the temporary bridge, collapsed by the wild transcript of so many fugitives, had felled with a crash at the height of the battle. With his death closed a turbulent reign, most likely not as sinister as Christian writers portray him (we lack of alternative sources to inform us) although undoubtedly fatally hampered by the severe economic difficulties caused by the isolation respect the rest of roman empire consequence of the sentence of Maxentius as "outlaw", signed by the other lords of the Empire at the conference of Carnuntum (308). Anyway, we can highlight, as main axes of his policy of government, both his moderately militant paganism (he didn't persecute to the Christians), including here the cultivation of the most ancient Roman religious traditions, and his strong promotion of the political importance of Rome: by then a city as big as decadent which, deprived of the vast majority of their once enormous power and influence, had seen its political role reduced to the status of mere capital "spirit" of the Empire. Proof of this is the erection of buildings as sumptuous as the basilica or the circus, the first on the forum, the second on the outskirts of the city, or the magnificent restoration of the very famous temple of Venus and Rome, the three projects designed by Maxentius as flagships of a aggrandizement campaign of the Eternal City as had not been known for many decades.

As in so many other particularly dark times in the history of Rome, it also corresponds to the study of the coinage of the period go a little beyond the information provided by the terse written and / or archaeological sources. In fact, Maxentius issues are particularly interesting both their accused peculiarity (their iconography is often away enough of the usual types in the rest of the Empire) and the fact accurately reflect the political environment in which they were conceived. This is certainly a topic of great interest but for its wide dimension beyond the limited scope of this work, which revolves around a single issue: Constantine's one to be exact but directly related with Maxentius emissions (formally they are very similar) although in an ideologically opposite direction. We´ll return to this subject later, for now let's attending the final collapse of the regime of Maxentius, event which possess one exceptional archaeological testimony: the discovery in 2005 of the imperial standards of Maxentius within a corroded wooden box (we see them in the following photos) in the Palatine hill, where they were buried by their defeated supporters the night of 28th October 312 in order to prevent them from falling into the hands of the hated Constantine.

Constantine made his triumphal entry into Rome the day after the battle of the Milvian Bridge. Gone was a night of anguished fear for the people of the city to the uncertainty about the reaction of the winner for them. And for good reason, certainly, since both people and the Senate of Rome had overwhelmingly supported Maxentius, obviously seduced by his effort of returning to Rome the leadership of the Empire and to preserve the privilege of tax exemption enjoyed by the citizens of Rome from almost immemorial time (167 BC specifically), which it had recently been removed by the Augustus Galerius Maximianus in what constituted a definitive test of the cessation of Rome as head of the imperial power.

Moreover, Maxentius considered Rome as "their city", positioning it above any other city in the Roman world, which naturally favored greatly their appreciation by the people and the Roman Senate. Achieved in this way the love and approval of the romans, with all their immense significance both spiritual and harmonizing with centuries-old Roman traditions, no longer seemed so necessary the tetrarchic "official" legitimacy so strongly refused to Maxentius at the conference of Carnuntum. In other words, the relationship between Rome and Maxentius can be described as a mutually beneficial interdependence whereby the decaying but still very prestigious Eternal City was responsible for the compensating of the Maxentius´ regime legitimacy deficit while Maxentius, in turn, returned the favor replacing to Rome on his throne of imperial capital, head of the roman world, as well as ensuring the perpetuation of the many privileges obtained in the heyday of the city. Magnificent proof of the above is the main type of reverse that can be found on the coins of Maxentius in which appears an allegory of Rome deified (this is the basic model existing several variants. In one of them appears Maxentius himself, with military dresses, in an attitude of worship the goddess Roma) inside a temple hexastyle (actually it is the temple of Venus and Rome: true symbol of the city that, as we said, had been charmingly restored by Maxentius) all surrounded by the extended legend SVAE VRBIS CONSERVATORES, this is "the Preserver / Protector of His City". As seen, a strong statement of intent by Maxentius towards Rome with little room for confusion or misinterpretation. In the following pictures we can see two excellent examples of these coins -verygood art, by the way- issued in the mints of Aquileia (1st) and Rome (2nd).

Hi Mike I was trying to follow you but can't . I can still read your writings such are interesting think it over Mike

Beautiful coins and so much history! Thanks for sharing them with us!

Beautiful coins with so much history. Ancients provide a never-ending learning experience

Lots of history in this period, and it shows on their coins.

A very interesting story, thanks for sharing it.

It continues to amaze me how beautiful ancient coins can be. With their minting techniques, you would not think that possible but they outdo most modern issues with their beauty. Thanks for sharing this.

I enjoy reading about the history associated with coins. Thanks for the blog.

Two very beautiful coins. I may be a bit prejudice as I am of Italian descent. Fantastic history lesson. I enjoyed it very much. Thank you for your research and hard work. Is it possible to see some of your sources for further reading? Thanks.

Another very interesting blog. If I wanted to read up what book would you recommend . There were plenty of murders during the this time in histoty. Thank you . Mike