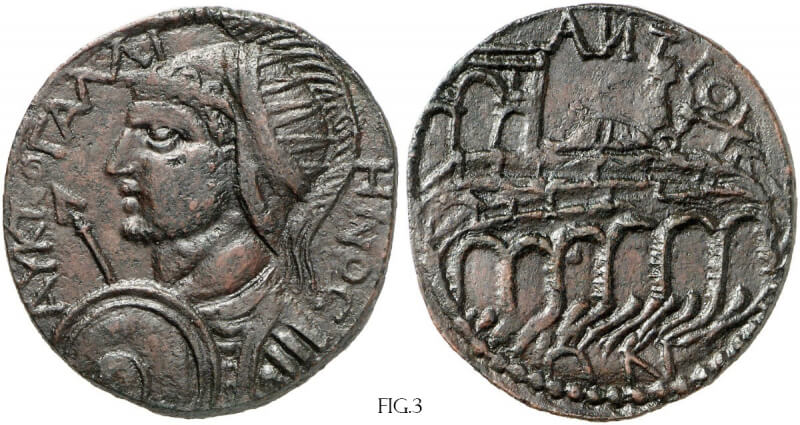 This bridge is mentioned in the description of the city written by the Greek geographer and historian Strabo (65 BC - 24 AD), which shows that it was already built at the beginning of the first century AD. Judging by the images of the bridge, long time ago disappeared, which appear in certain monetary issues coined in Antioch in the third century AD, probably is a work of the second half of the first century BC. Let's get acquainted with these very interesting pieces...

These are three large bronze series issued between the years 249 and 268. In all of them there is a bridge of good ashlar masonry, with six semicircular arches and a railing in the form of a metallic grid. In one of its stirrups there was a commemorative arch with a large central span and two smaller lateral ones: something very typical of the best Roman pontifical works, which indicates that this bridge was one of them, reason why the city was so proud of it as to dedicate it these superb pieces of more than 30 mm in diameter. The male figure that appears leaning on the board of the bridge is an allegory of the river Meander in the form of river god.

The first series was issued in the name of Trajan Decius as we can see in figure 1 (image taken from Fritz Rudolf Künker GmbH & Co. KG, auction 236, october 2013).. It presents a very careful art, unusual but not exceptional in Antiochian coinage. Its average diameter is 32 mm. At present it is a very scarce emission which indicates that its coinage volume was quite reduced in antiquity. Of the three known issues with this type of reverse, this is the one with the best art and also where the bridge over the meander is represented with greater detail, being therefore greater its historical value.

The second series (figure 2 - image taken from Classical Numismatic Group, Inc., Triton XIII, January 2010), in the name of Valerian I, presents an art similar to that of his predecessor, Trajan Decius, although somewhat less careful. Its diameter is a little larger: 35 mm. It is very scarce today.

The third series (figure 3 - image taken from Fritz Rudolf Künker GmbH & Co. KG, auction 236, june 2016), in the name of Gallienus, is by far the least scarce of the three, being known several dies of it. Its average diameter is 32 mm. It is the one that presents a coarser art, clearly similar to the rest of contemporary Antiochian issues. It has the peculiarity of presenting the emperor looking left as well as armed with spear, shield and helmet, unlike the previous types where the sovereign displays the usual laureate and draped bust. It probably dates from the sole reign of Gallienus (A.D. 260-268), not coinciding the designer of the dies of this series with who designed the second series in the name of Valerian I.

Very interesting subject! Ancient coins are in a field all on their own.

Maazin how this coin shows how that civilization worked, and the amazing history of human architecture, we have all seen pictures like this in school, bu this is from their perspective, not the best picture, but an untainted one by schools and history.

Coins are an excellent way to learn classic history...

Nice blog. Coins like these sure help in telling about history.

Of course. Ancient coins are the best vehicle the normal people have got to "read" and learn the history.

Important artifacts of the period and a great collecting specialty.

Enjoyable blog. I may have to look into ancients.

You will enjoy very much with the styudy and the collecting of ancient coin. I ensure you!

Quite a remarkable blog, as a lover of history, your blog is wonderful

Thank you!, your satisfaction is a powerful stimulus for me...

I don't collect ancient coins but I don't have to to enjoy the blog you wrote. I picked up some things that's the way it works we share our knowledge about our coins. It was very interesting and I can see alot of research. I love history and every coin has a story to tell thank you very enjoyable and educational. Mike

Many thanks, Mike. I try to share my knowledge through this blog. Enjoy it!