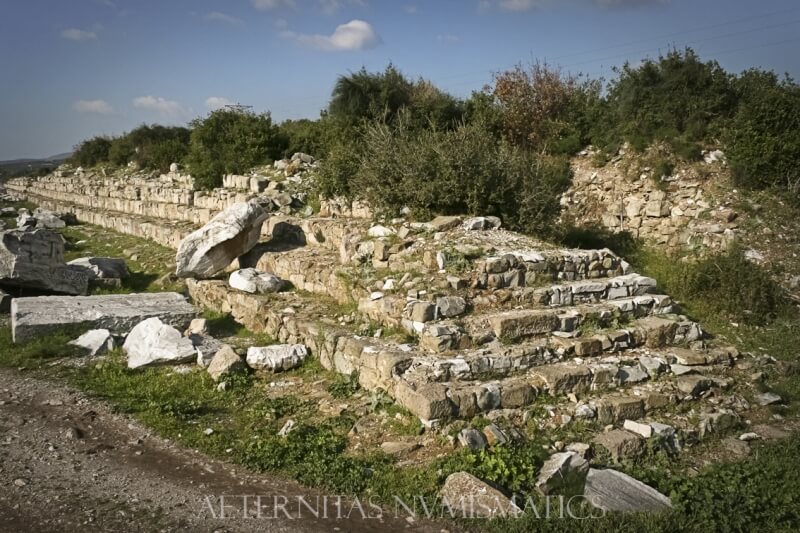 In December of 2015 we had the opportunity to visit the ruins of the ancient Cyzicus, in Turkey, and there we found the vestiges of what was its most precious jewel: the Temple of Hadrian. This is the account of what we saw there:

Between dairy farms and small farms dedicated to the cultivation of the olive tree rises a powerful staggered structure of more than a hundred meters in length. It is only partially excavated. Although there is no lack of ashlar in its walls, masonry agglomerated with lime mortar predominates. It is the podium of the temple of Hadrian: the largest and most sumptuous of Cycicus buildings, considered in antiquity one of the most sublime buildings of all time, to the point of appearing included in all lists of marvelous buildings made by the classical authors. In some cases it was even compared it closely with the Artemision of Ephesus, considering that it could well replace it in the famous list of the seven major wonders of the ancient world. So proud was the city of Cízicus of his wonderful temple that it did not hesitate to represent it in the reverses of its coins as we can see in the AE26 of Caracalla attached.

Hadrian visited Cycicus in A.D.123, shortly after the strong earthquake that shook the region. Moved by the degree of destruction that the city had suffered, he ordered defray the reconstruction of the city and, also, the erection of a lavish temple to worship his imperial figure using imperial funds. The resulting work was a huge octostyle temple, with sixteen columns on each long side: the highest ones in the classical world with its 21.3 meters in height and 2.3 meters in diameter (the second highest ones, in the Lebanese temple of Baalbek , "only" reached 19 meters). But if the new temple was immense (the largest in the ancient world as recently calculated), the sumptuousness of its decoration was not far behind, abounding the most beautiful friezes and architraves carved out of a high quality white marble. The remains of these superb sculptures now occupy, rather huddled, the small esplanade located in front of the podium of the temple, being possible to walk among them and contemplate the beauty of their designs.

We continue walking parallel to the huge podium. On one side, the confused agglomeration of exquisite pieces of marble, on the other one the powerful steps give way to a beautiful white ashlar pavement. The fragrance of centuries, of antiquity, is so intense that it drills the senses. At last, at the northern end of the podium of the temple, we find the remains of certain vaulted structures, clearly Roman. Its state of preservation is little better than mediocre. Nevertheless they provide such interesting information as confirming that Hadrian's temple was an ex-novo construction, thus contradicting the usual practice in the Roman East of erecting the great temples dedicated to imperial worship over earlier sacred precincts of Classical or Hellenistic Greek epoch.

One last surprise awaits us a few meters from the afore mentioned northern end of the temple. At the end of 2013 a giant corinthian capital (photo attached) was unearthed here, the only one among the many that possessed this magnificent temple that has reached almost intact the present day (as far as we know). The huge piece measures 1.9 high and stands in situ, as it was found, supported in fact on an original ground base. It is the largest specimen of corinthian capital of the world, which is no small thing. Fortunately it is quite well preserved, being able to admire the delicate beauty of its acanthus leaves, covered by a delicate reddish hue yielded by the clay in which it laid buried so many years. Majestic, complete and absolutely majestic. Words are missing to describe it.

Unfortunately little more is what has remained of such a celebrated monument of classical antiquity. And the truth is that it was not always so: in 1431 the italian scholar Ciriacus of Ancona could still see 31 standing columns. Since at that very moment the centenary temple was being cannibalized for the construction of nearby Bursa, Ciriacus attempted to persuade the ottoman governor to cease the spoils. He did not obtain the least success: in 1444 the number had been reduced to 29 and in 1500 florentine ecclesiastic Bonsignore Bonsignori could count only 26, which had begun to be used to make cannon balls (the denominated "pedreros", a type of primitive cannon, did not use metal bullet but stone bullet). In the nineteenth century there was no column left, in fact the whole superstructure of the temple had been completely plundered and there was only the current podium. This was the sad end of the once magnificent temple of Hadrian...

I went to your web-site and really enjoyed it. Anyone interested in ancient times and coinage I would recommend checking it out. Also had fun looking at all your items for sale! Beautiful! Thanks for a great blog!

Thak you so much for your suppor, Kepi!

I do appreciate the extra work. We here love the history and the research. But the coin tells the story. Every coin has one and once we research it we get a whole new meaning of why it was made were it was made. I research every coin and the story behind it I have learned more here about history than I did in college. Things I never heard of before. That's why I love collecting. Thanks again. Mike.

Thanks for reading the blog. A good numismatic always research the coins he purchases, You can learn so much...

Thank you for a very interesting blog.

Thak you so much, CoinLady. I follow you too!

Enjoyed the blog! Your experience can be tied to the coin.

Yes, the idea is to tie history and coinage.

Not much about the coin, however interesting the blog was.

The mention to the coin is relationed with the temple, the center of the blog...

Would love to sweep that site with my metal detector. LOL

OMG! The film Midnight Express would be an understatement. LOL.

The blog was interesting. But you didn't mention the coin. Those of us who don't covet them. In would of liked to here more about it. Thanks for the work and story. I do appreciate that. I would of liked to connect the coin to the history. Mike

Hello Mike The coin is mentioned in the text but a little indirectly. So I have edited the blofg in order to link better the coin with the text. this is the paragraph edited: "So proud was the city of Cízicus of his wonderful temple that it did not hesitate to represent it in the reverses of its coins as we can see in the AE26 of Caracalla attached." I celebrate you like the post. Regards!