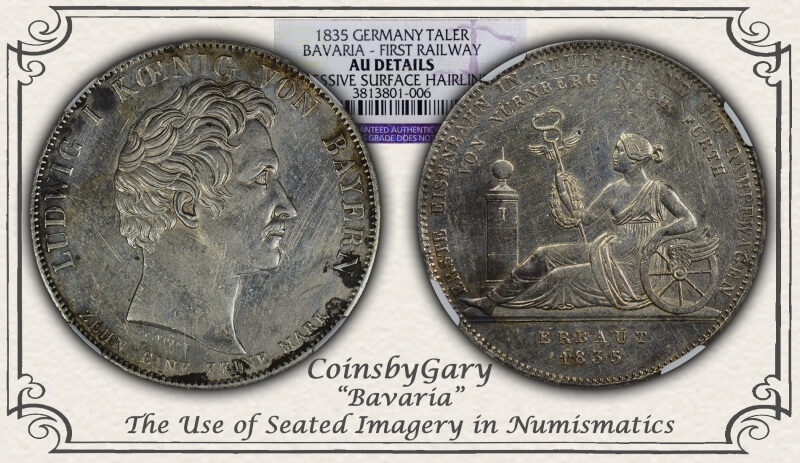 There are those collectors who will under no circumstances have details graded coins, medals, and tokens in their collections. Then there are collectors like me who will make exceptions for them under certain conditions.

About a year ago I wrote about replacing three details graded coins in my 7070 type set. I particularly remember how pleased I was with the replacements and finally having the entire set free of problem coins. Then when I purchased a Classic Head Large Cent earlier this year, I went out of my way to buy a problem free coin. I ended up with an attractive VF-30 1814 Classic Head Large Cent for my 7070 Type set.

Now within the space of two months I purchased an UNC-details improperly cleaned 1853 HK-6 So-Called Dollar and an AU-details excessive hairlines 1835 Bavarian Taler, so what gives? First there is a big difference between a type set and a theme-based custom set. For my the type set I am looking for the best grade within a type that I can afford. When I am buying coins for any of my custom sets, I am looking for certain design features.

That said, I still try my best to buy problem free pieces for my collection but under certain circumstances, I will make an exception. Those circumstances are defined by my self-imposed exception clauses.

The first clause is if the cost of a problem free coin is too high. For instance, I bought a Saddle Ridge Hoard coin which was improperly cleaned. Had I not bought that coin, I would not have been able to afford any of the problem free coins. Therefore, it was that coin or no coin.

The next clause is if the coin is rare. This was the exception for my two aforementioned recent buys. For the most part rare equals too expensive. However, the demand for these two pieces is low enough that they fall under the radar screen of most collectors. That said, there is one thing I can't get around and it's that the two pieces I bought rarely become available for sale. Not knowing when or if I would see these pieces again, I bought what was available at the time. As an extra bonus, because they were details graded, I got them for a bargain price.

The final clause is if environmental defects make them ungradable. By defects I mean defects by natural causes and not improperly cleaned, dipped, plugged, repaired, whizzed, artificially toned, etc. For example, I bought an 1860-O half-dollar recovered from the SS Republic shipwreck. In this instance, the seawater damage adds to the allure of this coin.

Now I could have applied this clause in my search for a Classic Head large Cent because the planchets in this series were of such low quality as to lead to corrosion. However, since the coin I bought was neither too expensive or rare, and I bought the coin for my type set, I decided to go with the problem free coin instead.

Every once in a while, you will find a coin that is still attractive in spite of the improper cleaning. This was true in the case of the so-called dollar I bought from Jeff Shevlin as a result of meeting him at the ANA's Worlds Fair of Money show in August. Though the cleaning hairlines are visible they are not distracting. Therefore, I consider this so-called dollar as improperly cleaned in name only and I am delighted to have it in my collection.

The Bavarian Taler destined for my seated imagery custom set is another story. This coin I recently acquired through an auction and even though the listing described the piece as having excessive hairlines, the listing pictures did not show them. Taking the listing pictures at face value, I thought that I might luck out and ergo I aggressively bid the coin and won. When I first saw the coin in hand I was taken back by the hairlines. In fact unlike the so-called dollar, the hairlines on this coin were very distracting.

Finally, this is not a dig on the lister since I knew what I was getting and I acquired the coin at a discounted price. It is however a reminder that listing pictures may no always be what they seem.

As a photographer, I know how to make a coin look its best and to adjust the lighting in such a way as to make the hairlines in effect invisible. Unfortunately, my picture without the hairlines makes the coin look flat and a little dull. The devices on this coin are much more robust and three-dimensional when taken with the distracting hairlines visible. When you manipulate the lighting and the coin positioning there are trade-offs that you just can't get around.

As a comparison I am also accompanying my post by a comparison between the flat and robust versions of my pictures.

10/12/15 I am adding one more picture to this post that I took with a diffused lighting source instead of a direct source as with the other pictures. You can still see the hairlines but they are not near as noticeable as before. I think the single reverse image is the most accurate representation of the coin in the hand. Lighting is practically everything in coin photography.

This was good & thoughtful. Whatever you like, whatever works for you.

Great to see the basics of coin collecting reiterated so well. As a foreign coin collector I rarely see graded coins in my collecting world. When I am hunting for a coin I am hunting for the story.. my aim is to get the best available, and the key word is available. I have coins I suspect NGC and PCGS might reject, but given that those coins are so rare there are at the most not more than 20 known world wide( at the very most) if I worried about grade I would never see another one again. So I reinforce coins by garry comments about making exceptions

If you like the seated figure with shield, why not start collecting the "original" designed coins. Following Liberty backwards in history and you might find yourself looking at Roma or even Nike or Athena. Don't let age deter your collecting there are still quality coins available to fit your theme! I quickly found examples ranging from $40 on up with decent detail and artistic quality.

Follow this link to my set where I do just as you say and connect a few dots with the past. I am always on the prowl for good candidates to add to this set. https://coins.www.collectors-society.com/WCM/CoinCustomSetGallery.aspx?s=13319

That is definitely the hardest part in buying a coin on the internet. I definitely shy away from such purchases. I still think that it is a beautiful coin.

Beautiful coins! Thanks for an interesting blog!

I agree with you on the "Details" distinction and there are instances where it makes the best financial fit. Thanks for your view!

Thanks for the info. Very Informative. Also great photo demo!!

Awesome! Thank you so much!