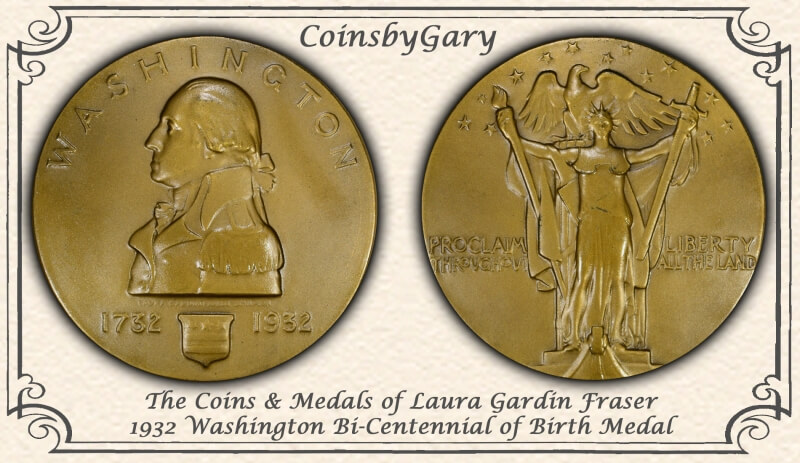 Among the greatest of accolades an artist can receive is if a group of his or hers peers recognizes them for their artistry. This honor was effectively bestowed on Laura Gardin Fraser when a special committee of sculptors selected her design for the official 1932 medal of the "United States Commission for the Celebration of the 200th Anniversary of the Birth of George Washington." That committee made up of a virtual who's who in American sculpture consisted of Daniel Chester French, Herbert Adams, Lorado Taft, and A. A. Weinman. With the committee's selection, the National Commission of Fine Arts unanimously approved Mrs. Fraser's design to be struck by the United States Mint under the supervision of Mint Director Robert J. Grant. [1]On page 4 in the January 1934 issue of "The Numismatist" is the following description of the medal's design features. "Obverse, bust of Washington in military uniform in center. Above, "Washington," Under bust, in small letters, "Laura Gardin Fraser, Sculptor." Below in a straight line, "1782, 1932" separated by the Washington coat-of-arms. Reverse, figure of Liberty holding a torch in her uplifted right hand and a sheathed sword in her left hand. Above, to the left of the figure an eagle with outspread wings, and above, 13 stars grouped in two lines. Straight across lower half of medal in two lines separated by the figure, "Proclaim Liberty Throughout All the Land." The reverse also shows that the eagle is perched atop a fasces. The Washington Bicentennial of Birth medal struck in platinum, silver, and bronze is 75.5mm in diameter. An exact duplicate of the bronze medal but only 58mm in diameter was struck by the US Mint for sale to collectors. The medal in my collection is the 75.5mm bronze variety. The 75.5mm bronze medal was to be "used by the United States Commission for the Celebration of the 200th Anniversary of the Birth of George Washington as a medal of award in connection with national essay, oratorical and declamatory contests sponsored by the commission." [2]The platinum medal is one of a kind and the first ever struck in platinum by the United States Mint. Struck from the master dies, this medal weighs in at a full pound. In a ceremony on the south lawn of the White House on December 1, 1932, the platinum medal was presented to President Herbert Hoover, Chairman of United States Commission for the Celebration of the 200th Anniversary of the Birth of George Washington. Laura Gardin Fraser was present at the Philadelphia Mint on February 4, 1932 for the striking of the platinum medal and had this to say as expressed by Charles Engelhard. "After scrutinizing the medal as it came from the press in the Medal Room of the Philadelphia Mint, Mrs. Fraser expressed her complete satisfaction with its artistic success. She pointed out that the use of platinum retained without impairment all the finest details of the sculptor's art in plaster, retaining the design without need of oxidation or other artificial treatment in order to successfully carry out the work." [3]Mrs. Fraser was very good at keeping a diary. She wrote not only of James and her's work, but also of their social life. In November of 1930 Mrs. Fraser wrote about beginning her work on the Washington Medal. In December of 1930, she wrote of completing the Washington medal for the competition. Concurrently, she wrote about celebrating James 54th birthday in November with a party at Tide Hill Tavern, near Westport, Connecticut and moving to their winter home in New York City the next day. In December Mrs. Fraser writes, "A Merry time! A beautiful, crystal clear, cold, wonderful Christmas!" [4] 1 The Numismatist, October 1931, pg. 738 2 The Numismatist, January 1934, pg. 43 The Numismatist, January 1961, pg. 18-204 End of the Trail the Odyssey of a Statue by Dean Krakel, pg. 44-45 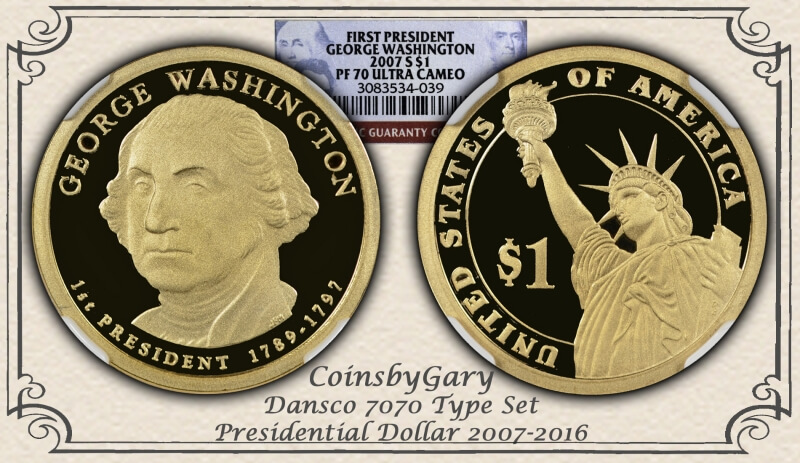 With all my recent coin purchases, I had racked up quite a few E-Bay Bucks. Thus, I was able to upgrade two coins in my 7070 type set based solely on E-Bay Bucks. With the remaining balance I bought a Conder Token for my seated-imagery custom set at a 32% discount.