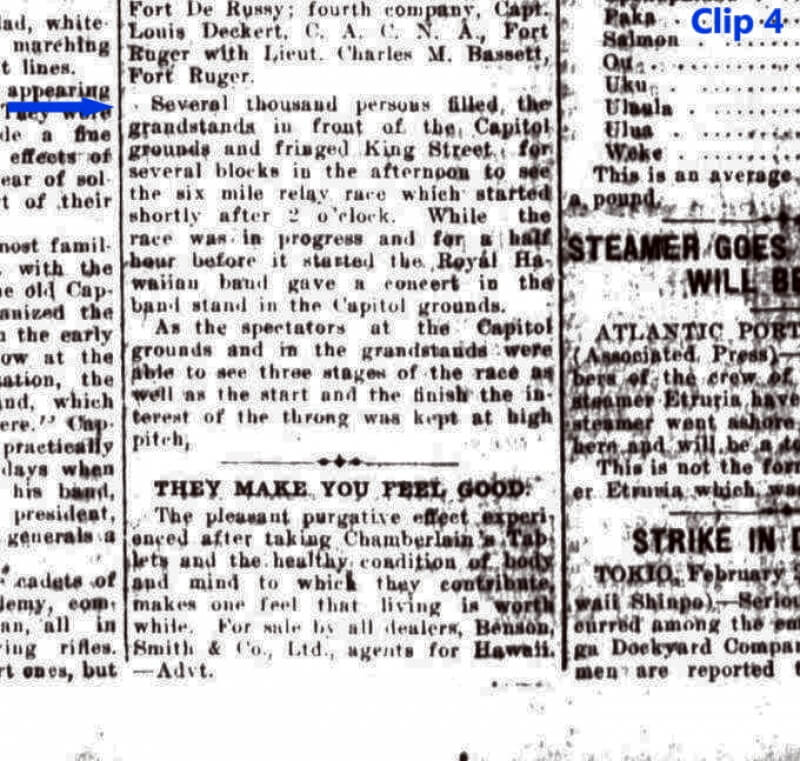 A 1918 dated Mid-Pacific Carnival Medal in 14K gold. The medal has undergone testing by a jeweler (there is also a 14k stamp on the reverse). The reverse is engraved 6 mile relay.

Note: The official years that the "Mid-Pacific Carnival" was held in Honolulu Hawaii is incorrectly reported to be held from 1910 - 1917 by several postings on the internet. This is attributed to the carnival's well collected advertising memorabilia (posters, post cards, poster stamps, etc...) (of which there is none for the year 1918). The 1918 Chamber of Commerce of Honolulu (organizers of the carnival) believed that it was unwarranted to have celebrations while World War I continued to drag-on. However, they made the decision to hold the 1918 Mid-Pacific Carnival with limited scope (a military parade and athletic events).

When I encountered this 1918 Mid-Pacific Carnival gold medal, I went into a full-research mode.

I located a March 1918 copy of the Honolulu: At the Crossroads of the Pacific (official publication of the Chamber of Commerce of Honolulu) which reflects that the 1918 Mid-Pacific Carnival was actually held. See Clip 0.

I went further in time and located a 1917 Chamber of Commerce of Honolulu decision. See Clip 1.

Unfortunately, I did not locate the names of the winners.

Based on these findings (it took a few hours), I purchased the medal ! (medal is still in transient to my location).

nice find and research. hope you also get a hold of the dollar

Nice research to your blog, enjoyed it!

Great blog. I love the effort you put into enjoying this hobby.

Now that's something of beauty. Made of gold 1918 can't get better than that. I to have not heard of this celebration. It sounds quite intriguing. You research Is excellent thanks for that and the pictures very much appreciated and enjoyable.

Beautiful item. I've never heard of Mid-Pacific Carnival. There are so many events commemorated with medals that the public, even the collecting community, may not be aware of. Great research. Enjoy this medal!