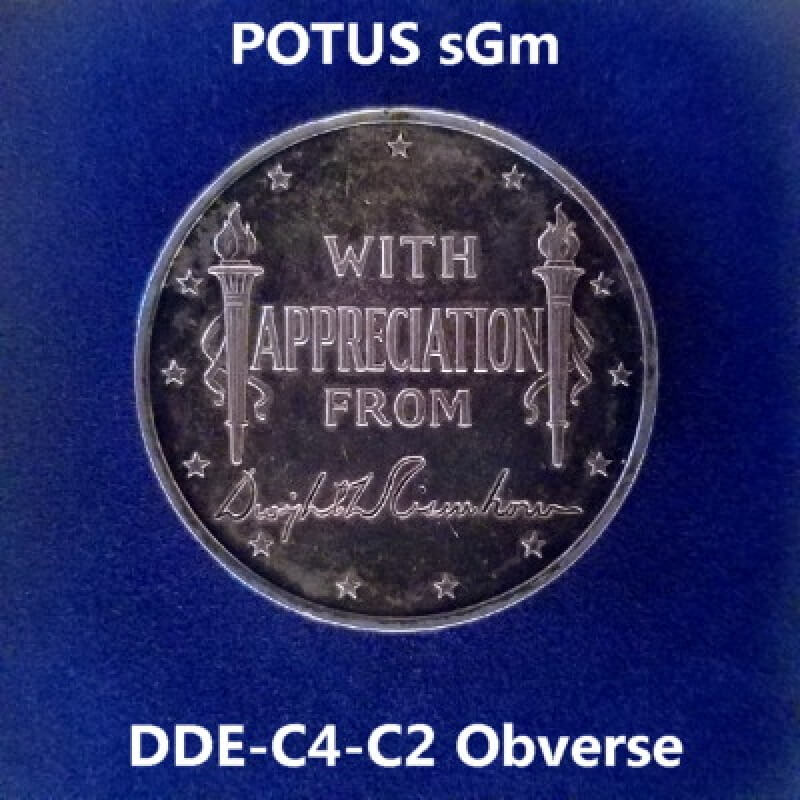 29 Dec 2016
As mentioned in my previous blog, this blog entry is to discuss the 1960 Paris Summit medal.

These images are of DDE-C4-02, 1960 Eisenhower Paris Summit  Event Award. Struck in silver and the same size as a US Morgan/Peace Silver dollar, but with a smooth edge. This medal was never cataloged from 1960 through 2014 (until my publish date of my first book)

DDE-C4-02 was struck by the Bureau of the Mint and issued to the White House Office. In France, President Eisenhower personally awarded these medals or they were issued by his direction.

I won't mention (sorry its part of my intellectual property in my book) the original mintage,  those in custody by the National Archives and Records Administration (NARA), and those destroyed by the Bureau of the Mint at the end of President Eisenhower's 2nd term in office. The official number available to collectors is known and documented.

DDE-C4-02 is a presidential artifact that was only awarded/issued while Dwight D. Eisenhower held the office as President of the United States.

A beautiful medal from the cold war era..

Like I said in one of your other blogs I like Ike. Wonderful piece. You have some classic pieces.

Another great article on IKE medals.

Yes, Thank you - Very Interesting - This kind of info does not usually make it into the mainstream - What is the title of your book & where can it be purchased ?

Thanks for sharing details of this interesting piece. I've never seen or heard of this medal, in all my years. It's nice that Ike's signature appears on the reverse. Great addition to a collection!