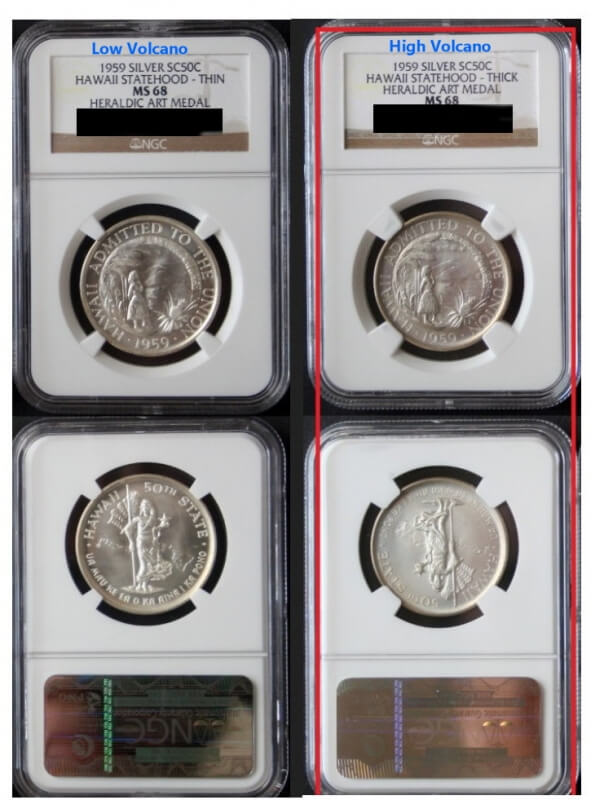 I made this discovery back in February 2013 .

The hula girl and volcano is the obverse of the medal.

The low volcano variety die (with reference to hula girl's chin) was used on the thin silver planchets and limited gold planchets. This variety is shown on the right side of the detailed image.

The high volcano variety die (with reference to the hula girl's forehead) was used on the thin and thick planchets. This variety is shown on the left side of the detailed image.

Note:  Additional differences is seen in the clouds, shoreline waves, and the smaller volcanos.

I surmise the following:

2. Low volcano obverse die was used on the striking of gold planchets.

3. At some point, the high volcano die was switched in to continue striking thin silver planchets.

4. At some point, a planchet change occurred (US Government request/direction due to same dimension as US half dollar) resulting in the high volcano die  and a  "medal configured "  reverse die   used to strike thick silver planchets. I believe that  the replacement reverse die was switched-in and placed incorrectly  in a  180 degree rotated position or "medal configuration" .

There are now five known varieties  of the Hawaii Statehood So-Called 50C.

Research that inspires others will always be remembered.

I own one of the thin planchet/high volcano varieties. https://coins.www.collectors-society.com/WCM/CoinView.aspx?sc=430672

Your blog really points out the adventure and discovery that is out there in coins. You also have such a nice scientific viewpoint. Thanks for sharing it.

Nice blog. The Heraldic Art medals had some stunning issues. I never knew until now that there were die varieties.

this is what collecting really is, researching and finding new things about coins that no one has ever noticed before

Look I said before it pays to go over old coins . I wrote a blog on do we know what were buying. This is a perfect example of it. You buy a regular coin look at it maybe a month later and you find a piece like this beauty thanks for all the information and the pictures it pays to go over your coins slabbed or not. Great blog!

Great detailed work. There are always new discoveries to be made in this hobby!