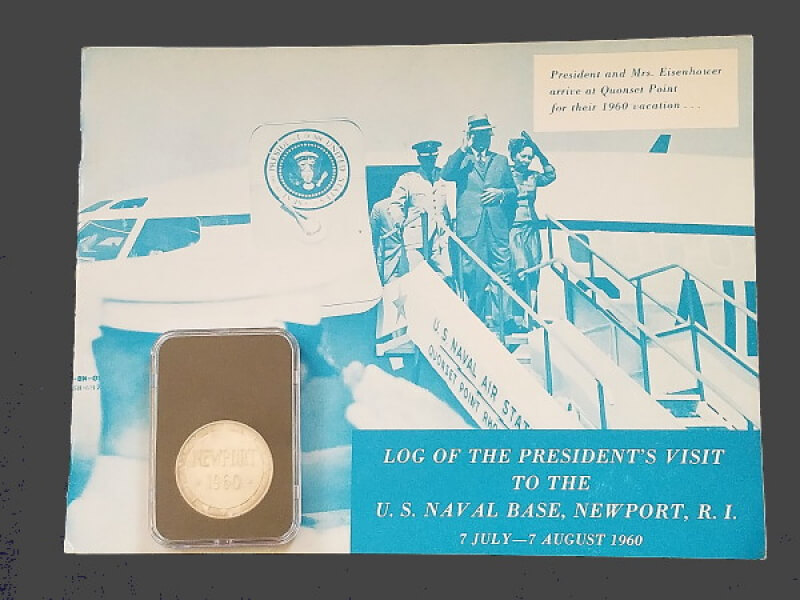 On this post, I'm continuing to  share additional  notes on my numismatic research  on "Special Medals for United States Government Agencies".

On the subject of "List item #5", that was provided as part of  Frank Gasparro's 1965 confirmation hearing as Chief Engraver and Sculptor of the US Mint, it's incorrectly states that these medals were presentation pieces for dignitaries abroad.

What is the evidence that makes this an  incorrect statement?

First-up is the President Eisenhower Appreciation medals.  I point-out the 8th & I Reunion Association. This association is an US Marines organization  who served in Marine Barracks on 8th & I Streets, SE, Washington, DC. This association shares memories  of their US military service, one of which was to provide presidential protection detail at Newport, Rhode Island.

President Eisenhower also directed his secretary to gift of a letter and Newport medal (see photo).

Lastly, a 1960 periodical that mentions the Newport medal (see photo).

Do you know that I have a listing of individuals who received the Newport medal?

It's fun to be a numismatic researcher (part-time), as I have a full-time engineering career that I also enjoy.

MIke, My blogs are written to share my original research/findings. No other author has published research in this area of numismatics, hence I share my research. US numismatics, specifically items manufactured by the US Mint are not to be focused on coins alone. Reread my blogs on the topic on the Manufacturing Triad of the US Mint. There are two other manufacturing functions that numismatist/collectors ignore. As for the special Government medals, I collect them with a passion. I am fascinated with the presidential connection. Even more so, when you account for how many were stuck, then destroyed by the Treasury Department. My blogs are about medals being received by President Eisenhower. Anyone can write about that. But I connected the awarding of the medal to actual individuals who share their experience. Then I upped it a level, by sharing articles from periodicals describing the medal and where they were issued. And yet again I raised the bar, I shared a White House letter gifting the medal with direction from the President. This is a home run for a numismatist. I also have mintages and inventory destroyed., previously not known. I identified the designer. I know the mechanism that authorized the US Mint to manufacture (without an enacted US Federal law. I know a few museums that hold these medals. I know how these medals are connected to Eisenhower presidency. I have two publish books about these medals. Three type of evidence were presented for the Newport medal: First person experience, Media from the period, and a White House gifting letter. Have you seen any other writer cover the topic with this type of coverage for a medal? This is way better than reading a numismatic guidebook, looking at pictures and reviewing the mintages. My research is beneficial two me. It provides content that is not known by many. I search/collect ephemera relating to the medal. Allows me to generate basic and specialized numismatic information for the first time. My findings can be made into an interesting exhibit. I can write articles for numismatic publications. I can continue to write books on this medals and other special government medals. Right now I have a draft version on my third book on the POTUS special Government medals. Up to year 2014, the Newport medal was not even listed in a numismatic guidebook. A few were listed in auction catalog with a physical description and speculative information. Hard original research is presented in my blog writings. Not opinions nor statements I pull from thin air.

Nice collection. Lots of history for sure! Thanks for sharing ; )

You have to help me out here. Are you against the government making medals for people and are not for sale to the public? I dont have problem with that. What's so wrong? Can you please reply on your site. I will check back. I mean that's what these blogs and the last ones seem to indicate. Thank you

Even though medals are not attractive to all collectors they make an interesting choice for future generations.

You have an interesting collection and we all appreciate you sharing it. Too little has been written on U.S. Mint medals outside of the typical stuff we are all familiar with. All this would surely make an interesting reference book someday if you ever consider publishing one. If so, I'd buy a copy.

Thanks for sharing though maybe not a visually stunning piece it makes up for it in the history you shared. Being a Marine Corp brat myself even makes it more enjoyable though my dad did not enlist until 1962 just in time to wait on a boat with others like himself off the coast of Cuba for what thankfully did not happen.