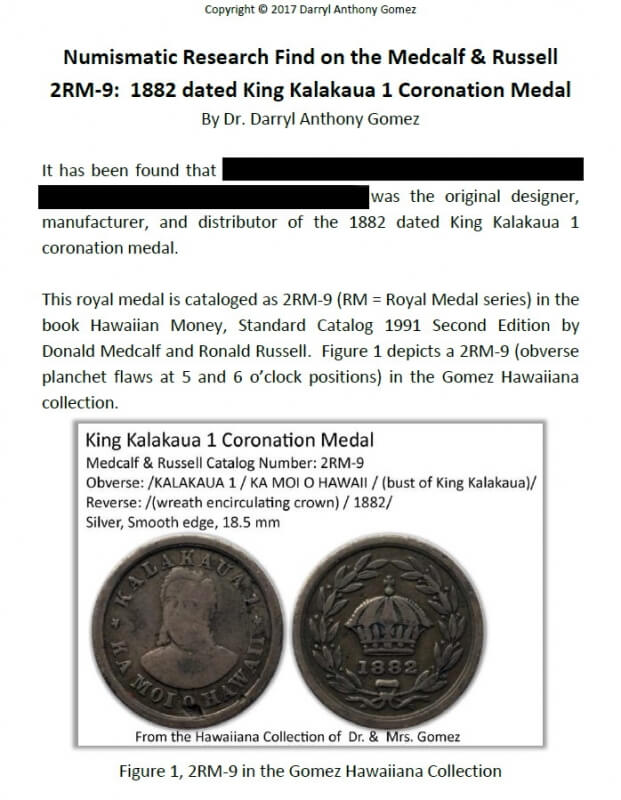 11 Jun 2017
I just submitted a US copyright on an article discussing a research find I made. For those who are familiar with my discovery models, this find adds a new piece  of knowledge to the King Kalakaua 1 Coronation Medal  knowledge domain.

Background:
The 1882 dated King Kalakaua 1 coronation medal  has befuddled Hawaiian numismatics for decades due to its unknown mintage, designer and manufacturer. This medal is identified as:

Research Find:
My research has identified the designer and manufacturer, but not the mintage of the 1882 dated King Kalakaua 1 coronation medal. Hawaii specialist know that this medal is rare, especially in uncirculated grades.

Attached are the first two pages of the copyrighted article. The key items of the research Intellectual Property (IP) has been redacted, but one partial image reveals an exact description of the 1882 dated King Kalakaua 1 coronation medal. This is the key piece of knowledge  that is part of this  "research discovery".

One last thing, a new metal composition of 2RM-9 has been discovered !!!!.

A lot of hard work went into this. Thank you.

Thank you very much for this info and the technique.

Great research work. Redacted parts, funny. I understand why. I appreciate your work and photos of these.Thanks.

Congratulations. Thank you for all that you do.

Thanks for the blog. Keep up the research.

Wow, great work! Endless kudos!! That is a beautiful medal, by the way -- I love the simple, elegant design. :)

great work keep it up

Thank you for this. Adds to the body of info on numismatics of Hawaii. That's a great area in itself. Reference book needed!

I want to thank you for your investigation into these coins. We would not know anything without your work and photo's. Thank you. Do you own any of the coins you have written about?it would be nice. Mike