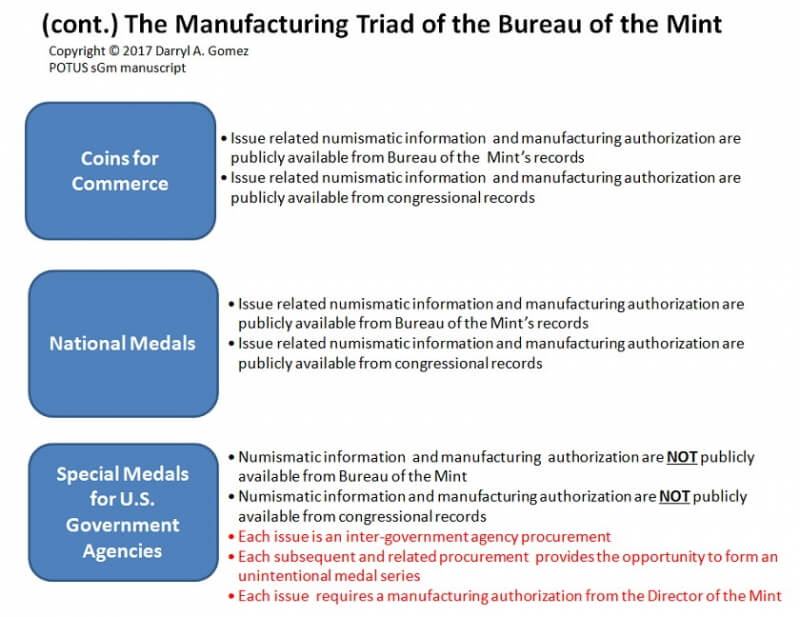 My ongoing research continues with a different view of U.S. numismatics from anything seen or known before. My novel concept was presented within an exhibit at the 2017 ANA World's Fair of Money  in Denver, Colorado.  To put it mildly, my novel concept went beyond comprehension for a few  individuals.   Taking a step backwards, I wanted to understand why this novel concept went over their heads. Hence, the creation of a very simplistic way to explain this seemingly basic concept from a "Manufacturing Triad" perspective.

From a holistic and inquisitive perspective, "What were the high-level manufacturing functions of the Bureau of the Mint from the years 1958 through 1962?"

Breaking down and clarifying this question:

The term " Bureau of the Mint" reiterates the bounding of the question to the period of time from the past.

Answer to the question:

Instead of a long winded answer to the question. Two simplistic and self-explanatory graphics were required.

In the second graphic: Availability of numismatic information and issue authorization are identified for each branch of the triad. Of particular interest is the bottom branch labeled "Special Medals for U.S. Government Agencies" and the red text. The red text are the three primary points that separate this triad branch from the other two triad branches.

Obviously, the first example is the POTUS sGm series (The White House Office) of which I have been discussing in my previous blog entries. The second example is the Central Intelligence Agency medal series. The third example is the Department of Commerce medal series. These three U.S. Government agencies adheres to the red text of the second graphic (procurement, pattern of procurement form a unintentional medals series, and each issue required manufacturing authorization from the Director of the Mint).

In summary: With this small but interesting insight from my ongoing research, one can now see that there is truly is a knowledge gap on the third branch of the Manufacturing Triad of the Bureau of the Mint.  There are now three identifiable special Government medal series  that are  part of U.S. numismatics. Thanks to the numismatic trail left by Mr. Gasparro's. I forgot to mention,  that the placement of his FG initials are  similarly located (under the right leg of the eagle)  on the POTUS (Kennedy only),  CIA and DoC sGms !

Thanks for information we would not have access to. Mike

That is interesting. I've never seen anything like this. Anxious to see more, esp more modern figures.