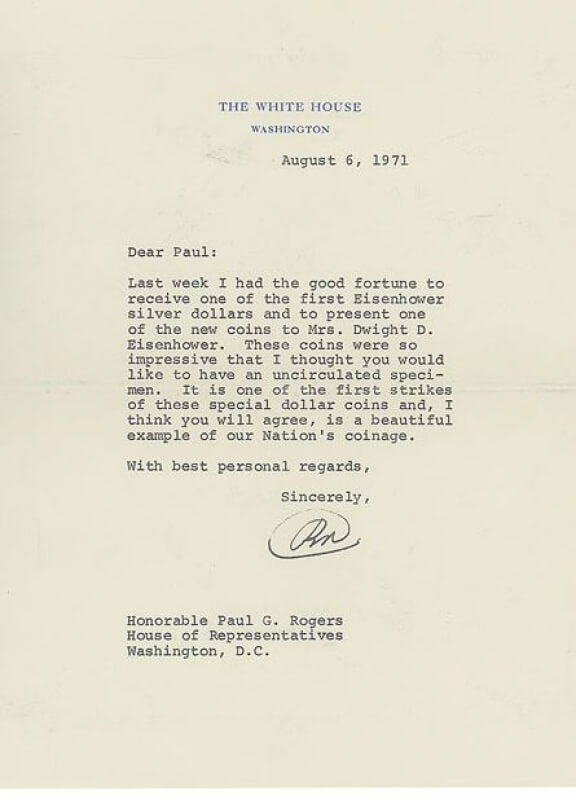 What are the Unsung First Day Issues?

Item 1. Image of the July 29, 1971 documentation of the FDI 1971 Proof Eisenhower dollar from the Director of the Mint (Mary Brooks) to the Special Assistant to the President Eisenhower (General Robert L. Schulz).

Item 3. Image of the November 3, 1965 documentation of the FDI 1965 uncirculated clad  Washington quarter dollar from the President of the United States (Lyndon B. Johnson) to a Congressman (Honorable Seymour Halpern).

Item 4. Image of the March 24, 1964 documentation of the FDI 1964-P uncirculated Kennedy half dollar from the President of the United States (Lyndon B. Johnson) to a Congressman (Honorable Robert G. Stephans, Jr.)

Very cool! You have an amazing collection ; )

What a great perspective on a popular marketing tool used by the third party graders. Since this goes back to quite possibly 1792, many have been gifted before releasing into general circulation, shouldn't the graders restate them as "First Day Public Release"? Or something to that effect?

Amazing letters and documentation on the coins. Should be in a museum exhibit on numismatic material. Any type of material like this awesome. Would love to come across something like this myself. Thanks for sharing.

I bet the General passed away and he sent someone to the estate sale. Allot of collecctors go to these. They have no living relative the lawyer sends out letters.i have been to many i got a beautiful piano for nothing. Needed 200.00 work. No one bid the lawer said take it. You get coins from famous people anything they owned.. Nice letter .

Doctor D always has something interesting to share. Thanks, doc!

Very cool stuff; thank you for sharing these with all of us, DrDarryl! And unless something like these items went up for auction, how else could anyone accurately "value" them in the marketplace - or does it even matter? Such great numismatic ties to American History. (But I have to admit, the first thing I always jump to is, "I wonder if these show any doubling - die variety collecting is a curse and a blessing!) -Sam Gelberd, ANA Numismatic Educator.

Variety collecting is just another way to say we are sick.