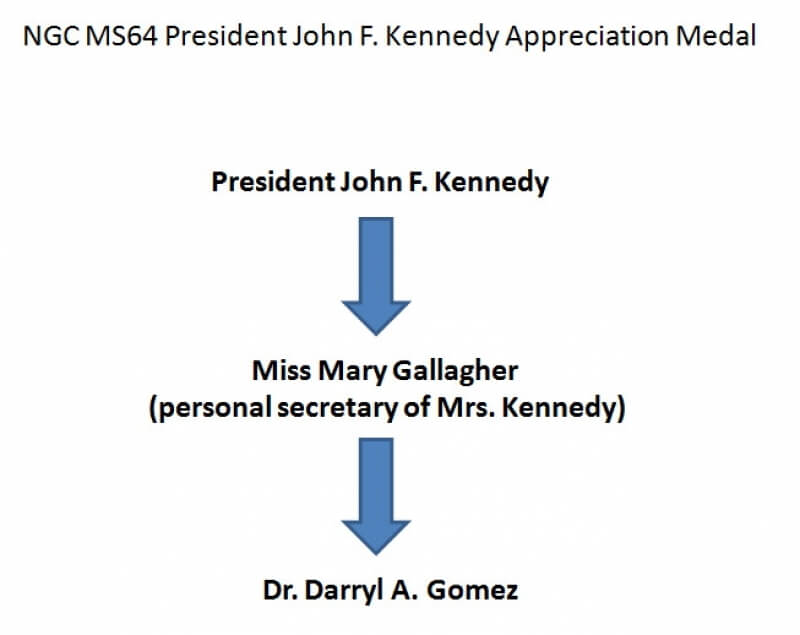 03 Jul 2018
One of the not well-known characteristics of collecting the POTUS sGm series is the ability to establish the provenance (unbroken chain of legal ownership of acquired) of specimens.
This unbroken chain of of legal ownership is often misconstrued as pedigree in numismatics. Pedigree is normally singly tied to a single famous owner, single event, single collection, single book plate, single hoard, etc...
In this shared NGC MS 64 example, it is the unbroken legal ownership chain from President Kennedy-to-Mary Gallagher-to-Darryl Gomez that is not normally considered in coin/medal collecting. The number of "-to-" provides the degrees of separation, in this case two.
It is this unbroken legal ownership chain to President Kennedy that makes it differ from a singly pedigree to President Kennedy or Mary Gallagher
Note that the  toning on the auction listing and NGC MS 64 are the same on both reverses.
This is a "new type" of numismatic collecting which I have identified in my writings about the POTUS sGm series.

There is an idea in mathematics where a number is assigned to a person based on a person they have come into contact with which shows how relevant that person is in their field. With that concept, you would have a Kennedy number of two.

Huh. I will have to check out your other essays because I have no idea what an sGm is. ;-) ~Matt

Nice. You never told us were to buy your books. Or any legitimate questions we ask. Mike.

Impressive. Makes a lovely medal that much more meaningful.