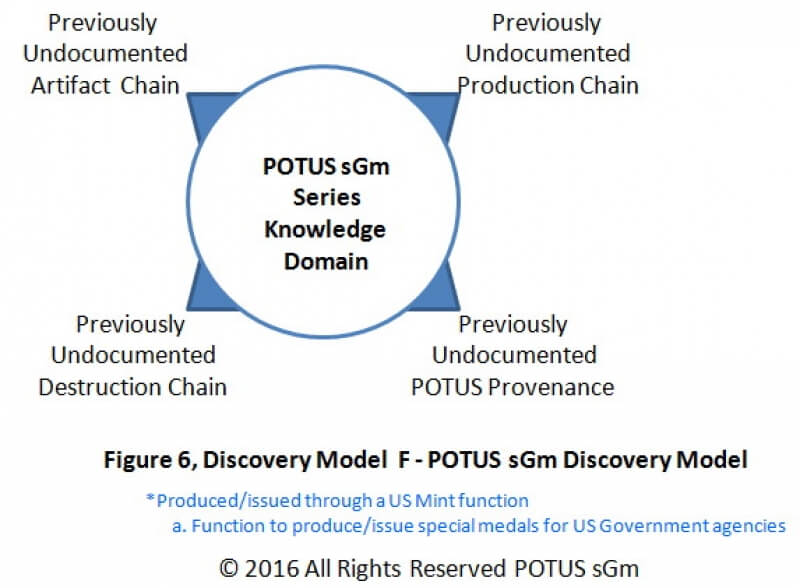 06 Nov 2016
The following three models (Model D, E, and F)  explains how an entire US Mint® series can be discovered!

The legend for the below models:

In the case of the POTUS sGm series, from 1958 to the present, the US Mint® has never released comprehensive production and general numismatic information related these special Government medals. It took a numismatic researcher to uncover this US Mint series. One injustice from the withholding this information was the fact that these numismatic medals are true to life presidential artifacts that is unknown by historians, numismatists, and collectors.

Model D - Previously Undocumented Issue - The initial discovery of a POTUS sGm and its supporting documentation as an official US Mint issue.

Model E - Previously Undocumented US Mint Series - The initial discovery of the 15 types of POTUS sGm and its supporting documentation as an official US Mint issue.

This is how a US Mint series was  discovered!

What an interesting story. The details surrounding the start of the series not to mention successive mintings must be a real read for everyone.

This is fascinating. Is anything not a secret in the government?? Can't wait for the book! Thanks!!!

This is very exciting. A great blog. There has been thing's kept from Numismatic collector's for years. They have not released information to the public for years looking for to more you have done your homework.

That's a great blog posting. Your link to that site, also a fantastic part of an overall amazing blog. Looking forward to the book.