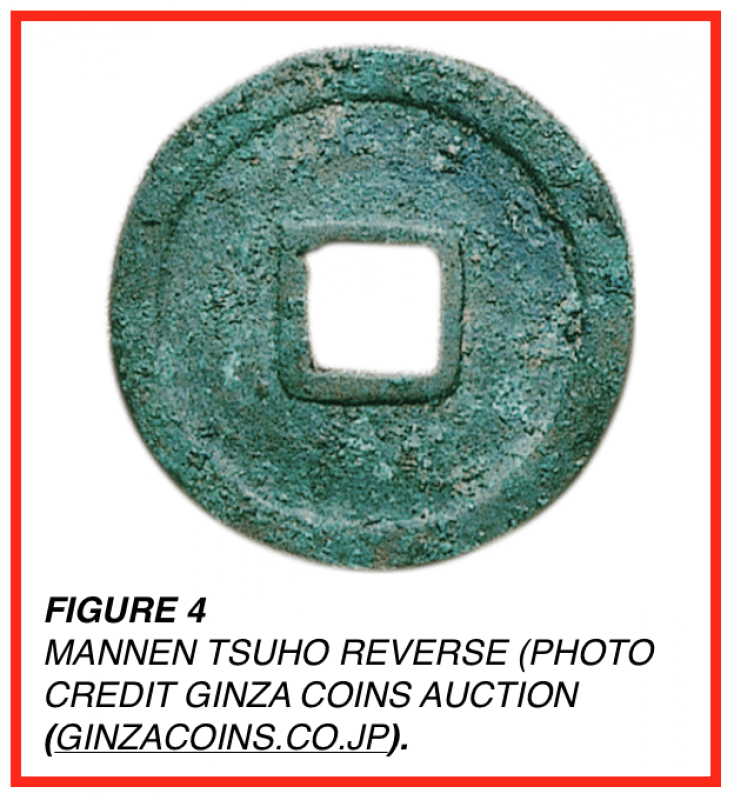 The second of the twelve ancient coins was the Mannen Tsuho. Meaning "ten thousand years currency," Mannen Tsuho is inscribed on the obverse. Read from the top clockwise, the four characters are man, nen, tsu and ho. Cast in copper from 760 to 765 during the rule of Empress Junnin, the Mannen Tsuho was released alongside two other coins: the Taihei Genho and the Kaiki Sh oho. The Taihei Genho and the Kaiki Shoho were made out of silver and gold, respectively, but may not have been  released into mass circulation. In fact, only one of each coin exists today. Interestingly, the calligraphy on these coins was created by a well-known calligrapher at the time, Kibi-no-Mabi, who is believed to have invented Katakana, a Japanese language system based on syllables. Further, several different calligraphic variations of the Mannen Tsuho exist. The Japanese Numismatic Dealer Association coin catalog lists three varieties pertaining to the nen character; the Munro coin catalog lists five varieties by distinguishing between the types of the feet of the ho character and also the width of the rim; the Hartill catalog lists four varie ties by distinguishing between two types of the tsu character. The main varieties of the nen character are shown in the Figures 1, 2, and 3. Figure 1 depicts the horizontal stroke nen, whereas Figure 2 shows a vertical stroke in the nen. Finally, Figure 3 shows a dot instead of a stroke in the nen. These coins were circulated at a rate of one to ten. That means that ten Wado Kaichins were exchanged for one Mannen Tsuho, ten Mannen Tsuhos were exchanged for one Taihei Genpo and ten Taihei Genpos were excha nged for one Kaigi Shoho. The Mannen Tsuho, the second of the Japanese 12 Ancient coins, was cast from 760 to 765 in copper and has several varieties.

I can tell you are really passionate about your collection. Thank you for sharing.

These are a specialty series for sure!

very nice; will you be writing on the other ancient 11?