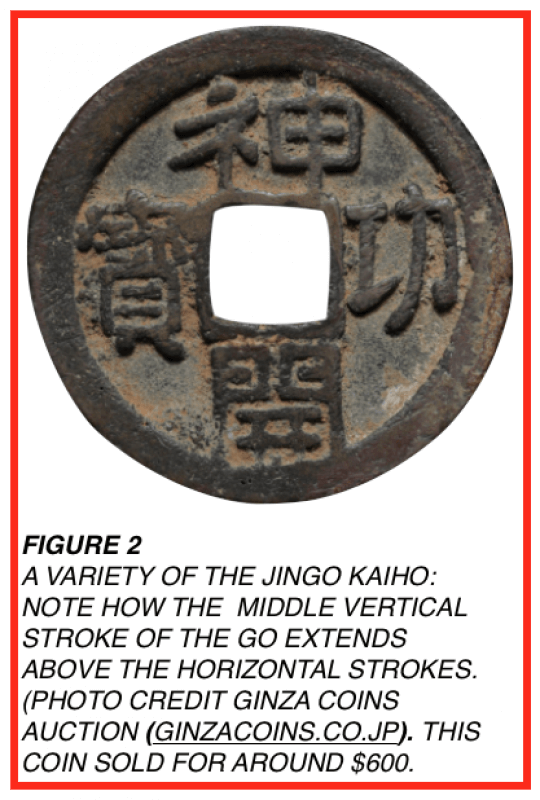 The Jingo Kaiho, which was the third official Japanese coin, was cast from AD765 to 782. The characters Jin, Go, Kai and Ho are inscribed on the coins in a clockwise pattern. This inscription means "New Treasure of Divine Merit" according to the Munro catalog or "Inaugural Currency of the Jingo Era" according to the Hartill catalog. Since the Jingo Kaiho was denominated at one Jingo Kaiho to ten Wado Kaichin, some of the Japanese people were reluctant to exchange their hard- earned Wado Kaichin for Jingo Kaiho. Because of this, the Japanese government set a new exchange rate of one-to-one in 772, causing the Japanese citizens who had exchanged their Wado Kaichin for Jingo Kaiho to lose tremendously. The characters on the Jingo Kaiho are written by Kibi no Mabi, as with the Mannen Tsuho. Many varieties of the Jingo Kaiho exist: the JNDA catalog lists seven varieties; the Hartill catalog lists six; the Munro catalog lists five. These varieties pertain to whether the Kai character is open or closed, how the Go (or Ko) character is written and also the size of characters and rims. The pictures depict several of the main varieties, but many more subtle varieties also exist. Produced for 17 years, the third coin of Japan, the Jingo Kaiho, exists in many varieties.

Keep up the great work. I would like to see more as you go on.

I have a real passion for Ancient Coins and find your collection quite interesting.

ouch, that is some loss!