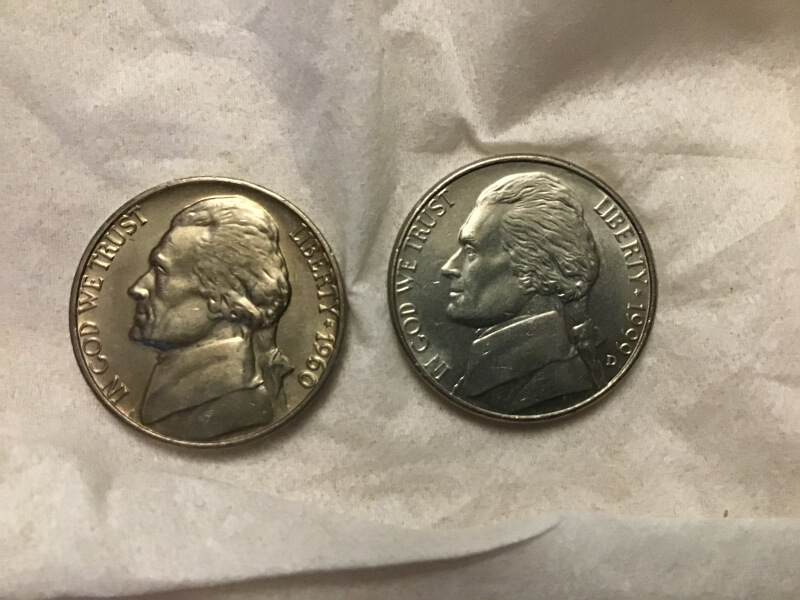 
Hello! This is Eric and today I will be writing about Jefferson Nickels!Ý

And the cool thing is that the designs have changed over the years. Jefferson nickels were first minted in 1938 and still are today. The original coin was designed by Felix Schalg. But later on, there was a new design called the westward journey series and a modified Jefferson nickel design.Ý

ÝOn the obverse is President Thomas Jefforson. He did many great things to shape today's America, for example he helped write the constitution. And on the reverse is the Monticello building where President Jefferson lived. And I think that the reverse is really detailed with all the windows, doors, and pillars.Ý

Now, I want to add on to the westward journey nickel series and the modern modified Jefferson Nickel. Let's start off with the westward Journey nickels. They were minted from 2004-2006 celebrating the 200th anniversary of the Louisiana Purchase and the famous expedition led by Captain Meriwether Lewis and Lieutenant William Clark. Better known as Lewis and clark. Because of that four new designs of the Jefferson nickels were designed. Including the Peace medal design in 2004 (designed By: Norman E. Nemeth) which shows two hands making a deal for the State of Louisiana. The second design in 2004 is the keelboat (designed by: Al Maletsky) which shows the boat that transported the people and supplies needed for the expedition. In 2005 there are another two designs including the American Bison (designed by: Jamie Frankie) which shows a bison which kind of looks like Black DiamondÝ in the buffalo nickel. And the last design is the Ocean In View design (designed by: Joe Fitzgerald) it shows an ocean in view and the words, ‚ÄúOcean In View O! The Joy!‚Äô. And that quote was written in Clark‚Äôs journal.

After that year in 2006 they modified the Jefferson nickel design again! It showed the same designs just in a different way. It was designed by Jamie Franki.

Now lets talk about values and errors. Most Jefferson nickels are worth face value unless they have a low mintage or something special about it. I think that the ones before the sixties can be worth a bit more in MS condition. And the key dates could be worth lots of money! Some key dates include: 1938 S 1939 D and the 1950 D. The silver war nickels are also worth some money.

Now lets get to the errors. Most Jefferson nickel errors can be worth at least ten or twenty dollars in circulated condition. But ones in mint state can be worth hundreds! Some errors include: 1939 DDR, 1943 3 over 2, and theÝ 1949 D over S.

A some what overlooked series with potential. I've noticed though that the higher grades are seeing some strong numbers in the market place, especially with registry set builders.

I enjoyed this very much you have come a long wy. Always check to see if someone else designed the reverse. That happens allot. Thanks!

Really well done blog! Thank you for a review of one of the great and iconic U.S. coins.

Good job. I enjoy that you list a bibliography. It makes your blog more professional. Thanks and good collecting.

Yes it is very fun to collect them. There‚Äôs this YouTube called RobFindsTreaure and that‚Äôs the only one that he‚Äôs missing the 1950 D