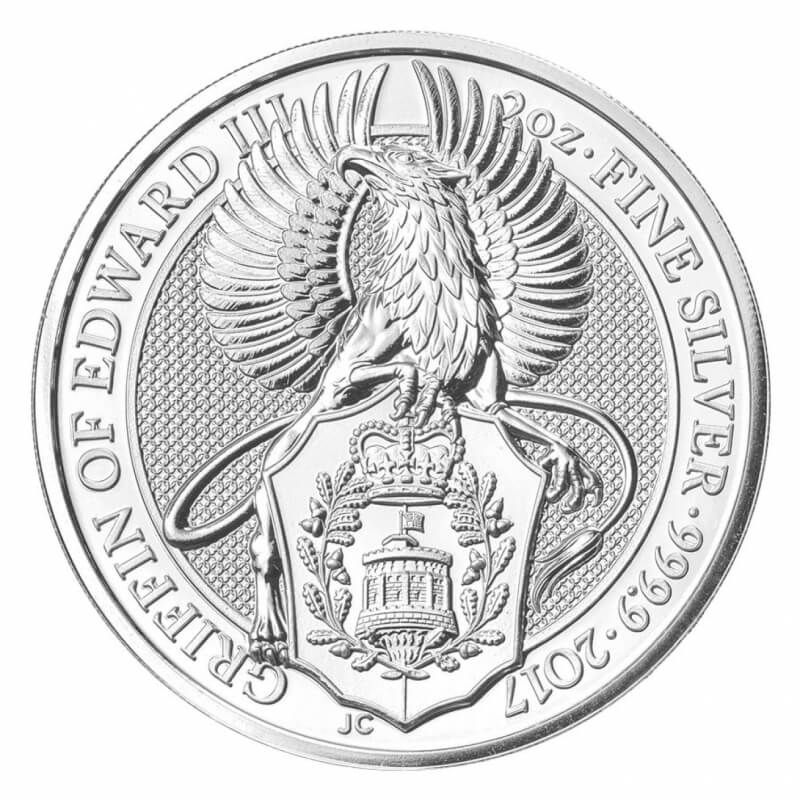 14 May 2017
The Queen's Beasts Series started last year with the Lion of England and is now in full swing with two issues per year with the exception of two years and will run until 2021. The first and last year of issue will only have one coin each. This ten coin series will depict the heraldic Queens's Beasts statues present at the coronation of Queen Elizabeth II and represent the royal line of ancestry. Each coin will have many different variations of precious metal and precious metal weight. The Silver released issues will come in 2oz & 10oz bullion mint state versions. The Gold released issues will come in 1/4oz & 1oz bullion mint state versions and the Platinum released issue will come in a 1oz bullion mint state version. It is helpful to mention that there is a silver proof version of the Lion of England in 1oz, 5oz, and10oz but this version's design varies slightly and is double the price of it's bullion counterpart.  In my opinion the 2oz silver bullion mint state version is the most affordable  and will be the one I will focus on for this and future posts about this series. You can currently pick up one of the three already released issues for around $60 in Gem UNC or $70 in MS-69 which is a bargain in my book when a 1oz Panda can cost as much as $50 in the same grade. The list below shows the three coins currently released and the future coins to be released in no particular order. A special thanks goes out to JM Bullion for their extensive background information on this series. Please visit there site if you would like more information about the series or individual coin designs.

Beautiful as a set! I recently added The Dragon of Wales to my collection. Thanks for your blog!

A neat collection to obtain. Nifty.

Well I finally found one in a one ounce coin. The only ones before we're five ounces. I think I will pick it up. Thanks again for letting us know about t hem. Mike

Why don't these pieces get more publicity? They are well-designed, collectible, in precious metal. What's not to love?

I've had my eye on these since they came out. Haven't bought any yet maybe this blog will do it! I especially like the 2 ounce issue. It seems to allow all the details to come out better. I think I'll go for the Dragon today.

They are all very good looking coins and very detailed.

Yes they are very beautiful coins. I am hoping to pick up all three at the World's Fair of Money.

They are beautiful. Now shouldn't Prince Charles be included as one of the Queen's beasts? His hair is beastly, that much is true. :) Love the coins!

these are very beautiful coins indeed