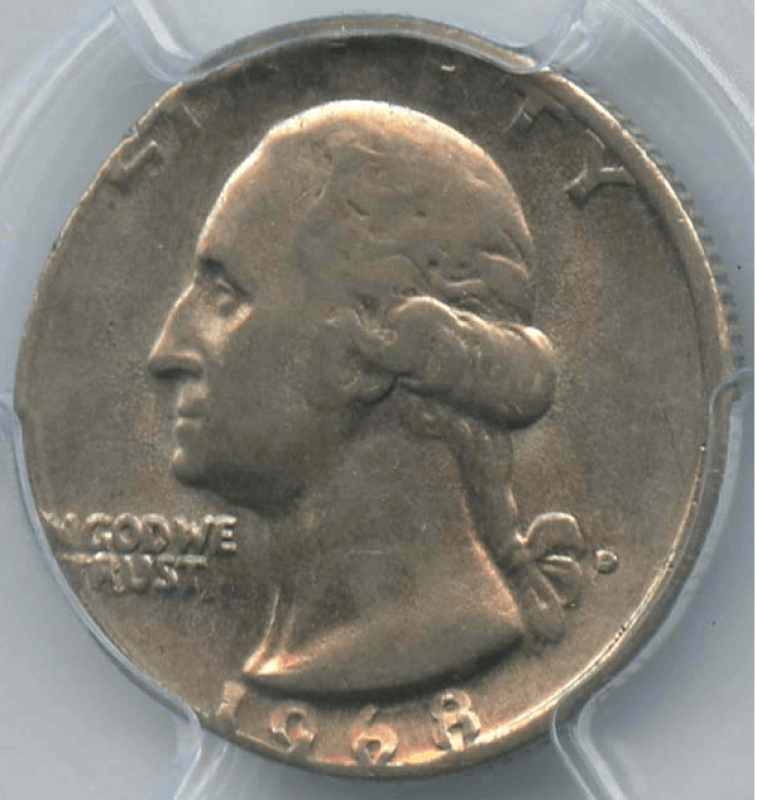 Well Halloween is closing in with just one full week of October left.  As for me I am enjoying one of those fall like days with clear skies and a nice breeze blowing in through the office window while working on my post as my little Chihuahua lazily snores in the blanket in the adjacent room doing his best to stay warm.  My freak today is hardly freakish and despite being different from those he was struck with he must have spent some time out in the world doing his best as a member of commerce.  With him being found under sized and underweight I doubt he ever enter a coin operated mechanism like the pin ball games that use to be stationed at the vestibule at the local Kmart, also gone from the landscape.  I do suspect at least for a time he went from change drawer to coin purse to pocket and back again during his working career unnoticed and unloved.  I imagine that when he first was notice it was the lack of having a copper edge that generated the initial excitement.  I know I get excited when I see that silver reeding without a copper edge on coins in my pocket change.  This exciting event is getting to be a pretty rare these days.  My last such find was the change I scooped out of a Coinstar reject bin that had been left behind in a little Northern California town while on vacation.  It was a quarter as well, oops sorry about that the wind through the window blew me off course so back to my little friend here.

So despite the lack of a copper edge this little workhorse of the vending industry was not silver.  Which probably became obvious as his first serious owner study it noting a lack of design and weight.  This quarter was actually a nickel, well it was struck on a nickel planchet as I guess you could still use it as a quarter.  I actually find it pretty amazing how much of the design was captured despite a starting difference of approximately 24% less in surface area.  Which may be the reason my little freak had the opportunity to spend some time in circulation before being saved to eventually join my troop of misfits.

As for the error type, yes back to â€˜Sâ€™trike as there was nothing unusual about the nickel planchet other than it wound up being coined as a quarter which occurred at the moment of the strike.  Then for the stats on this Washington Quarter Nickel it is as follows, 1968-D Mint Error 25C, PCGS AU55, Struck on 5c Planchet.  I feel the time spent in circulation dulled it surfaces just enough to add some character so as to imagine a story beyond that of a mere numismatic item.  Who knows maybe he did come to light after jamming a vending machine, doubtful as I do not see any damage but not wholly improbable.  Maybe upsetting its user wanting one more shot at high score and the owner of the machine having to remove the darn thing from the mechanism.  Well until next week when I intend to close the curtain to my freak show until next year I hope you take time or have the opportunity to enjoy the fall breezes and with any luck maybe spot some silver in your change or better yet a freak like this one.

I remember pin ball machines. What fun. They were a dime per game or three for a quarter. Did I just date myself..I am really enjoying your collection and your unique writing style. Please don't end this series...Thanks..

Thank you for the kind words, I will probably pickup the series again next fall following next weeks freak. There are some other interesting items I would like to write about though it is has been fun every week looking through my oddities to pick one to focus on.. If you like my writing style I do have an article in the November issue of Numismatist regarding another interest of mine, MPC. Thanks again.

With all the wear on it i find it amazing it was circulated for so long.

You were a good George, you can relax in your holder and enjoy your retirement!

Love it and love the thought George still did his job despite being a little bit small for his denomination. Thanks for sharing, looking forward to the final freak of the year.

That's what I would call a mess. Believe it or not it happens more than you think. There is one on a dime planchet. I forget the year.. Nice find look it forward to the next one. Thanks..