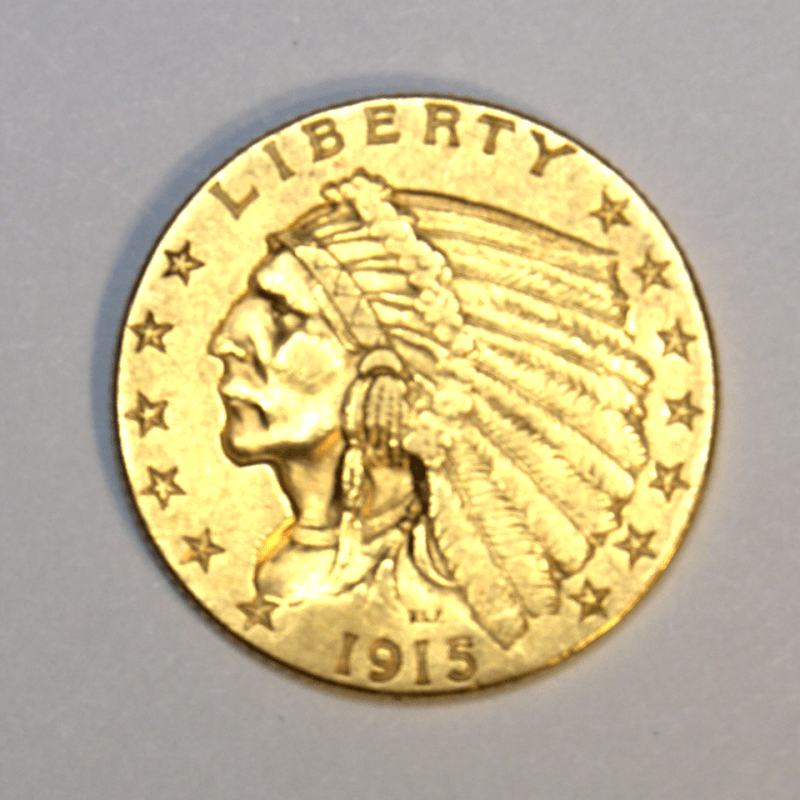 Augustus Saint-Gaudens was one of the most well know coin designers in the world. President Roosevelt commissioned him to redesign the gold coins of the United States. Unfortunately, Saint-Gaudens passed away in 1907 and was not able to finish all the redesigns. A student of Saint-Gaudens, Bela Lyon Pratt, was commissioned to finish the projects. Pratt was the designer of the famous Indian Head quarter eagle and half eagle coins. This was a significant change from the traditional "Liberty" design of past US gold coinage. The designs were the same on both the quarter eagle, $2.50 coin, and half eagle, $5.00 coin. The Indian Head design was preceded by the Coronet Liberty Head coin designed by Christian Gobrecht. The Indian Head design is an incredibly unique coin but caused much displeasure when the coin was initially released. The coin, instead of the traditional raised design of coins, the Indian Head coins consisted of an incuse design or a design where the devices of the coin are lower than the field. The majority of Americans were not fans of the design of this coin, mostly due to its incuse design. Some even claimed it was a health hazard because bacteria could become trapped inside the deeper spots of the coin. Regardless of the problems, the coin was a very successful type.

I have a 1915 Indian Head Head Quarter Eagle that is one of my favorite coins in my collection, for many reasons. It is 1.) a very unique coin, with its incuse design, 2.) it's currently my only pre-33 gold coin, 3.) it has a history in my family. Now for the story of this coin. Back before 1933, the United States was on the gold standard. Gold coins and silver coins were minted for the general public. Gold coins were minted until 1933 and silver coins until 1964. Of course, the US Mint still creates gold and silver coins, but they are made only for collectors, not for the general public to use to buy groceries. My great, great, grandfather was around during the time when the United States passed the Gold Reserve Act of January 30, 1934. Under this act, the United States was removed from the gold standard and everyone was forced to return their gold to the Federal Reserve Banks unless they were of significant numismatic importance. My great, great grandfather was a coin collector and collected all kinds of coins, with a significant collection of Morgan Silver Dollars, Peace Dollars, Franklin Half Dollars, and Walking Liberty Half Dollars and many other types of coins. He had a large collection of gold coins. I'm assuming he turned in most of his gold unless he believed they were of numismatic importance, which many of them were. Anyways, my great, great, grandfather died and was passed down to my great-grandparents. The majority of the large collection was then sold off to a buyer for significantly less than its true value. The coins were stored in cardboard flips in a shoe box, not exactly the best way to store coins. The coins were sorted by the dealer, who then bought the valuable, important coins that he wanted to buy and then gave back the "junk." The box wasn't thoroughly looked through, however, and, with ones of the flip's corners tucked into the corner of the shoebox was an almost uncirculated 1915 Indian Head Quarter Eagle. My grandparents then inherited the remainder of the collection. My grandfather isn't as big of a collector as his grandfather was, but he did have a small collection of his own and took care of his grandfather's coins and kept them protected. This specific coin was carefully wrapped and placed in a tube. Due to my interest in numismatics, my grandfather offered me a deal. As long as I agreed to keep all the coins in my collection and do not sell any of the coins, he would offer the coins to me at a 50 percent discount off fair market value. We went through the collection, estimated the grades, and I purchased the collection for half the current "Red Book" value based on the coin and respective grades. While the collection has several pristine coins, this is definitely the top-tier coin from my great, great, grandfather's collection. The entire collection, including this coin, is very special to me due to its long history with my family. I only have to continue to wonder where and what the other coins that were sold are.

That is a wonderful story. Every time you look at those coins you are also looking back on a long family history. I wish I had my family history going back that far. That quarter eagle was the first raw gold coin I bought. Boy, was I nervous sending it in to be graded and slabbed. I did well and it wasn't cleaned or fake. I've always been fascinated with that unique design. Thanks.

Thanks! I agree. Family history is often very interesting :)

Great blog! Enjoyed the story abt this special coin.

Great story we need more like that. There very enjoyable to read

Thanks! I'm glad you enjoyed :)

Great story. It’s nice to know the stories behind family items you come to own. You can cherish them for the memories of the person associated with them, but knowing the backstory and being able to share it with others is nice.

Thanks :) Yes, I am very glad I know the history of the coin. It makes a great coin just that much better.

I like this design, and great blog and history!

Nice story about your family history in collecting coins.

Thanks! I'm glad you enjoyed the historical aspect :)