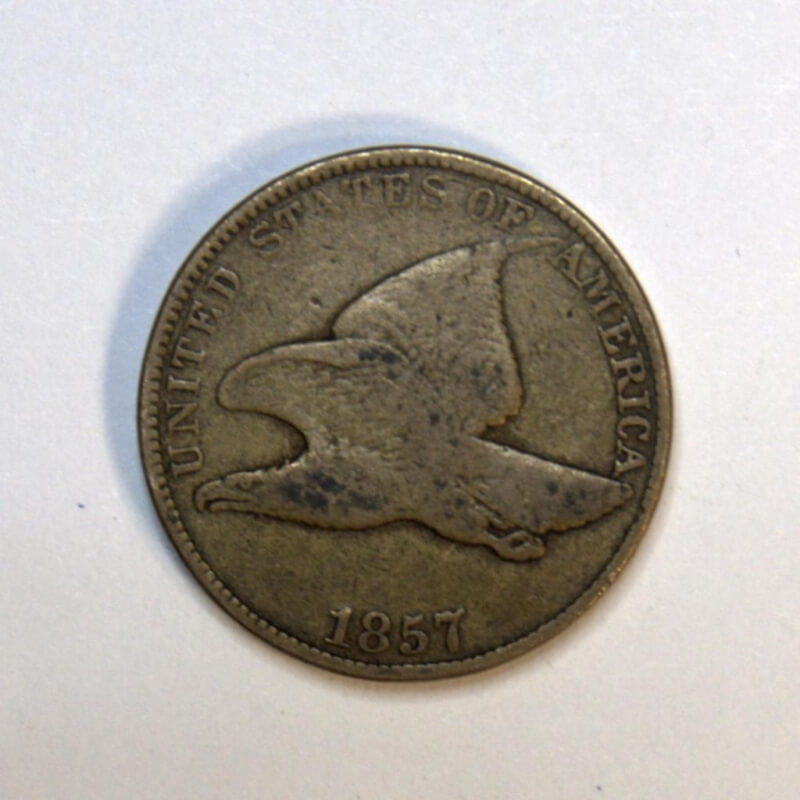 The Flying Eagle Small Cent is a less-popular coin type with an extremely short run, but is actually one of my favorite coins ever minted. This was the first small cent, which replaced the large cents. Both half cents and large cents were very unpopular and it began costing a lot of money to mint copper coins, so the decision was made. The half cent would be discontinued and the one cent would be replaced with an option much smaller. The small cent quickly gained popularity. The Flying Cent officially began in 1856, but these were intended only as “concept coins” to show Congress what the new, small cent would look like. The 1856 Flying Eagle Small Cent is incredibly valuable and rare, with a mintage estimate of just 2,000.

Each and every coin is special in its own way, whether it's a Franklin Half Dollar or a Mercury Dime or even a brand-new Native American Dollar. Flying Eagle Small Cents are made of 88% copper and 12% nickel, whereas the previous large cents were made of 100% copper. The Flying Eagle Cent weighs 4.67 grams, much lighter than the 10.89 grams of the previous large cents, making it easier to carry larger amounts. The coin has a diameter of 19 millimeters.

The Flying Eagle Small Cent was minted for only three years, all at the Philadelphia Mint. In regards to this, there is only one real key date in this series, the 1856, with a mintage of around 2,000. Even in good condition, this coin can easily fetch well over $6,000. The 1857 and 1858 are both similar in value, at around $50 for a fine example. The 1858 cent has two varieties, the small date and the large date, both which have a similar value and a similar mintage. If you are creating a full Flying Eagle Small Cent collection, however, you will want both the small and large letters examples. The large letters variety has much bolder looking letters on “United States of America” than the small letters.

There is only one real error in this short series, the 1858 overdate, which has the 8 struck over the 7. For an error coin, these actually go for a reasonably low price, at only about $200 for a fine example. This is because the 7 was scraped in the die until it was gone, which was then replaced by an 8. The 7 can still be seen in better-struck examples, which is why these are more desirable than ones where the 7 cannot be seen.

Should I Get A Flying Eagle Small Cent Graded?

PCGS and NGC are the leading companies for coin grading in the world, however, it is also rather pricey to have a coin graded. If your coin is a key date and/or is in exceptional condition, that is when grading becomes a good option with the Flying Eagle Small Cent series. If you have an 1856, you definitely need to have it professionally graded, mostly for authenticity. These are commonly counterfeit, often by shaving off part of the last 8 on the 1858 examples to make the coin appear to be an 1856. Other than that, if you have a mint state example, grading would be highly recommended, but for regular good to extremely fine examples, grading is not generally necessary or even worth it, unless you just really like those slabs.

Every coin is special and individual in their own way and when you learn about a new coin, maybe that will be your next collecting goal!

Great blog! Really enjoyed reading it. I hope to get a Flying Eagle Cent someday!

Thanks :) I only have one right now, but I have considered doing a mini-set.

Flying eagles stand out among other cents, notably the obverse design. I've wondered whether the Mint purposely did an eagle so people would not confuse it as a dirty dime.

That makes sense, considering they significantly decreased the size and made it much closer to dime size. I never thought of that, but you may very well be correct :)

Great coin and great post! Such a short lived series. These coins were our first "NICKELS" which is a term purely born out of the metal content; called 'Nicks' for short. But then after the first few years of the Indian Head cent when the Mint went back to a bronze composition for cents, this term began being used to refer to those bigger, "Nickel Five Cent" coins that replaced half dimes starting in 1866. It's always seemed funny to me that the coins we refer to as Nickles nowadays, only contain 25% of the actual element nickel - they're 75% copper, but I guess we already use the term"coppers" to refer to our one-cent coinage. Oh well. -Sam Gelberd, ANA Numismatic Educator.

Thanks :) Very interesting. I didn't know that people used to call these nickels.

I love this design, and with the little run it had, left a big mark on numismatics

Agreed! Thanks for commenting :)

Thank you for the blog and interesting information.

Thank YOU for reading, enjoying, and commenting :)

One of my fav coins too.

I think the Flying Eagle Cent was such a breakthrough for mint . A new size, a new metal composition, and no allegorical Liberty. A short series but a very attractive little coin. I wish it had run a decade or so longer.

I agree! It might not be quite as interesting if it had a longer run, though :)

Great blog. You hit it all and sourced everything. Publishable material. Very well done on an interesting series. Thank you.

The eagle cent is the shortest coin series, just 2 years for circulation.

It is, but still one of my favorites :)

Thanks for the blog and information. I like these coins but only own a few.. I liked them there part of our coinage history but I never got that interested in putting a set together. I believe something else caught my eye and had to make a decision on my part the set I went for I did and still enjoy. That doesn't mean I don't like reading about them or studying them. Good blog if I was not retired who knows maybe I would of went back to them . Thanks again for your research and hard work. I did pick something up that's great thanks. Mike.

Thanks :) They are amazing coins!