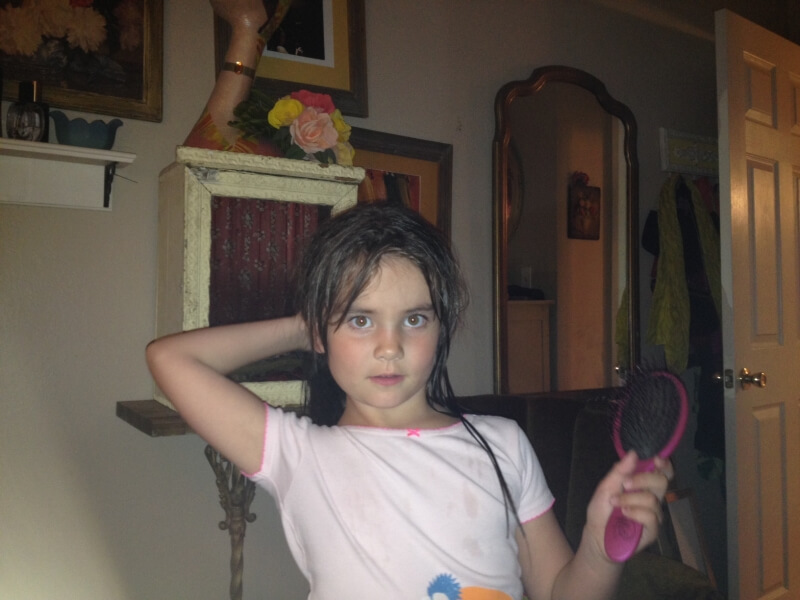 The picture you see above is my 6-year-old daughter, Audrey. She's my oldest, and she has her first loose tooth. I'm expecting it to fall out in the next week or so.

So, once that thing falls out and she puts it under her pillow, what should the tooth fairy (i.e. me!) leave in its place? I'd like to come up with something that won't end up getting spent when I'm not looking, so I've already ruled out an America the Beautiful quarter. I don't want to give her anything slabbed, either, since that just doesn't seem like the kind of thing the tooth fairy would do for her other friends (If I said "slabbed coin" to any of her friend's parents, they'd have no idea what I meant).
So, what's a good coin that won't get spent, can serve as a longtime keepsake, and won't make her question why the tooth fairy gave her something completely different from what her friends receive? I'd love to hear your advice.
Oh, and one more caveat -- she has a little brother who will lose his first tooth someday too, so I'm thinking it might be best to get two of the same item. It will save me from having to hear "but that's not fair" in a couple of years (I hear that a lot right now -- they're just at that age).

She's a cutie! You can't go wrong with a silver eagle. I like the hobo nickel too!

How about a red seal two dollar bill or Eisenhower Dollars?

The way the economy is going I would say a check.instead of a coin.

give them a coin in a cardboard 2x2 that isnt in pocket change so maybe they will look closer at it and get interested in coins. Or maybe if you have the money, get a abtman or superman coin for the boy and a pricnccess coin. I believe the perth mint maks these

I would go with a circulated Mercury dime.

As a kid I always received Kennedy Half Dollars. For our kids we used Eisenhower Dollars. Different enough to have discussions over, still spendable money or great collectables.

Buffalo nickels are always a hit.

I bought a 1 oz silver Tooth Fairy coin. They are really nice and have space to engrave a message on. Just google it. There are several different designs. I believe that Silvertowne has them.

It's been a while since I had to be "The Tooth Fairy" but I remember Ike Dollars were usually a hit and also started some conversations.

Roll of unaearched pennies. Under the pillow. When she find it you get surprised and explain what they are . Then you go out to buy a folder and a magnifying glass. So it is not just a coin, it is an experience with coins.

I got a diffent state quater for mine so maybe the national parks one would work now till 2021.

What about a buffalo nickel?

Since my children are 35 and 30 I do not remember what went uder the pillow for a tooth but I will find out real soon my first grandchild is going on 5 and has a full mouth of potential rewards. Stay tuned! My grandfather did my first tooth and I was told only the first tooth counted - it was a 1943 Walking Liberty Half for the year I was born. Why I remember that I cannot tell you.

I do not remember what I put or rather my wife put under their pillows for lost teeth, I am sure they appresciated what ever it was no doubt. I will be sure to ask my oldest as her oldest is now three going on four and will get a new tooth in a year or so. Right now the question being asked by the younder of my off spring is what is going to happen to my collection after I am gone? I answer you tell me I am not going to be able to answer that question.

I think a " Bugs Bunny " Franklin Half Dollar would be fun!

what about some $2 bills?

You can't go wrong with classic silver! How bout a few Mercury Dimes, or maybe a Walking Liberty Half. If you go with Kennedy, how about a 1964 half-dollar? If you want something more modern how about some uncirculated coins from her birth year. Personally, if the tooth-fairy were to visit me I'd like the classic silver coins and you can bet that they wouldn't get spent. My daughter is much older (she'll be 30 this year) but I got a 2009 50th Anniversary of Barbie Tuvalu dollar coin to represent her in my collection. I don't know if your daughter likes playing with Barbies but my daughter just loved them. In the end, I'm sure you'll make the right choice. Would you let us know what you decide and how your daughter received it? Have fun and cherish the moments. Gary

I'm still trying to figure out who my kid's bio-dad is, 'cuz compared to him, his mom and I were both beaten by an ugly stick.

Kurt, as much as I'd like to tell her that at times, she is only 6. I'm waiting until she's at least 10 before she gets the Dreamcrusher treatment.

But in hindsight, she might spend it. Maybe one of those gold ones (roll eyes here)!

You certainly can't go with Federal Reserve Notes, at least until after Pat Heller's promised imminent collapse of the U.S. Dollar has transpired. Then you can give them all you want, because they won't be spendable any more. (Geez, talk about "fairy tales"!!!) Can you pick up my derisive snicker on your PC's speakers?

I guess going with "whoever told you life was fair ... LIED" is completely out of the question, huh?