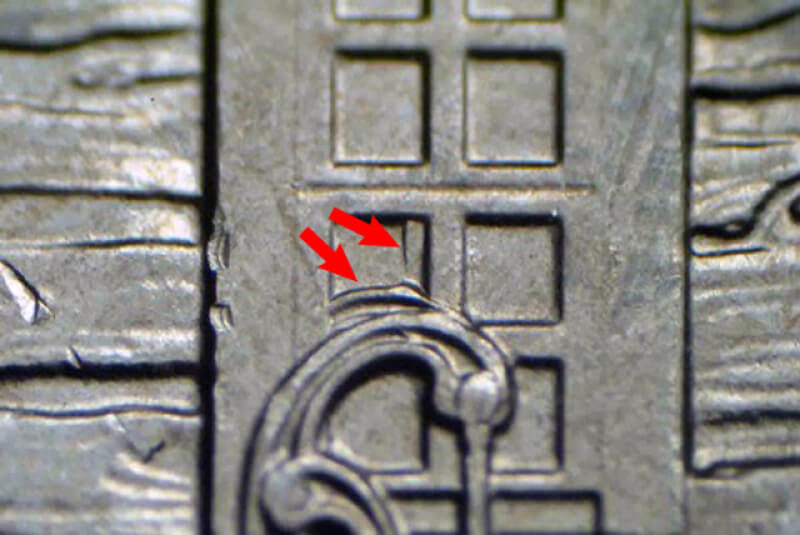 This coins in your pocket blog will be about more errors and varieties that I look for. Let me know if you are enjoying this series, because I enjoy writing them! Pre YN Auction frenzy is settling in, and I'm trying to get as many YN dollars as possible before the auction! I will still try to keep the blogs enjoyable though, not cranking out low quality work (I hope you think my work isn't low quality!) Anyways, lets start!

2004 and 2005 Westward Journey Nickels - I don't look for varieties on these, yet. I probably will in the future, but for now I just put aside the examples I find in a jar for later. I probably have around $4 worth by now.

(NOTE) Nickels and dimes are something that I don't search regularly. I will usually get penny boxes from my bank, and don't look at each individual coin carefully when searching coin jars because it takes so much time. My searching method on penny boxes goes something like this: If its a shield cent, I flip it and check the mintmark, if its a D, then it goes in the "dud jar" as I call it, or the jar to return to the bank. If its not a D mintmark, I check the date, 2010, 2014, 2015, 2017 P (If its a nice example) and 2019 coins will go into a pile to be searched later, and the rest go into the dud jar. For memorial cents, I check for the dates that contain errors that I search for, some are 2006, 1997, 1994, 1983, 1982, and 1972. Anything else goes into the dud jar. I will flip all the coins I come across, except if they are shield/memorial cents facing heads. If its anything I usually keep, like wheat cents and Lincoln bicentennials, then it goes into a pile of coins to store later. If the coin looks funny, I will usually look at it through my loupe, but I don't put each coin through the loupe because like I said, it would take to much time. After I've searched all the rolls, I go to the possible errors pile of coins. I sort them into their different dates, except for wide/close AM possible varieties, they go into the same pile. I search the possible wide/close AM's first, because there are usually the most of them, then search the rest.

1982 P No mintmark dime - This coin is pretty subtle if you don't look for it, as it will just look like a regular coin without a mintmark. The truth is, the mint forgot to add the mintmark to the hub, thus the absence of a mintmark! Prices can range from $20 to much more, depending on the condition. There is also a strong reverse and a weak reverse, just as with the 1922 no D cent.

1960 DDO proof dime - Like I said, I don't search dimes very often, and when I do its usually dimes in circulation, so I don't encounter silver dimes very much, and it doesn't help that its a proof! But when I do see a 1960 proof dime, I will check for the DDO. The doubling can be seen with the naked eye, and prices can range up to $200.

1934 DDO quarter - I don't see much silver quarters, as I don't quarter box hunt, and don't really buy silver coins, but I will still check for this elusive doubled die, as it is worth as much as $1000 in uncirculated condition!

2008 Alaska Quarter Extra Claw - This coin isn't really worth a premium, since its kind of an obselete variety, hasn't gained alot of attention and there really isn't a market for it. The only reason I know this exists is beacause Rob Finds Treasure, a popular coin hunting youtuber that I used to frequently watch, looks for them. I have found 2 out of around 20 quarters searched, so either I got really lucky or they aren't very rare. The extra claw can be found on the bear's left hand.

2015 Homestead Quarter DDO - This is another one of those state/monument quarter varieties that isn't well known. This one has a wider audience, with people selling it for around $5 on eBay. The doubling on this coin is in the middle, where the pump meets the window. It will show an extra pump handle, or extra window panes.

2016 Harpers Ferry Quarter DDO - A lot like the above, this coins doubling in in the middle of the design, on the windows. Doubling will show extra or extended window panes. This variety can fetch around $5, if you can find a buyer. That's the problem with these modern varieties, they don't get a lot of attention, so there really isn't much of a market for them. You can find a neat variety, but you will have trouble finding a buyer for it.

(NOTE) A great website to use for identifying your variety is varietyvista.com. It will show all (or most) of the documented varieties for the date in question. There are literally hundreds of different versions of the most popular variety of the date. For example, the 2009 varieties, most people don't know what they are, and if they do, they only know of the most popular ones, the ones with significant doubling. There are 9 or 10 (my memory fails me) 2009 DDRs with an FS (Fivaz Stanton) number. Basically what that means is that the variety is included in the Cherry Pickers' Guide, which includes the most popular varieties. However, there are over 300 different varieties on the 4 different designs! Yes, 300! Over 100 of them are on the Birth and Early Childhood design, and show minor doubling on the logs on the cabin, and only about 30 or so are really, significant.

(EDIT) I forgot to include the 1976 Bicentennial doubled dies, so I will include those in the next edition.

Nice information. I will add those to my notes. Thanks, Mal.

Nicely stated and researched blog! Living in Wisconsin, I'll have to get those quarter varieties one of these days.

Aside from the doubling you really have to admire the detailed look of "weathered wooden "clap boards on the Homestead coin. The artistic work is really quite extraordinary..

We have veNo banks are selling any boxes where I live. Good luck Jude. P.S. Your blogs are very well written. No "bulk" junk. Thanks

WOW...that's a LOT of remembering. I do check my pocket change for odd looking coins, but I would need a cheat sheet to check for all of those error coins. This task sounds like something to do on a rainy day for sure. Thanks for reminding me that there are error coins out there to be considered. I may have to check my own coins eventually. Great post. Keep blogging on this subject. Since I'm new to the hobby, I'll pay closer attention. Good luck on the YN dollars!

Nice summation of some varieties we can all search for. Thanks J/A, nice job.

Really informative, thanks... I'll be on the lookout! I went though every Wisconsin quarter I had....nary a high leaf or low leaf to be found, I am disappointed to say.

Amazing how many varietys are to look for. You really need to know what to look for. I look for a W on quarters. Thats about my skill level on looking at coins right now. Very interesting blog. Good luck getting YN dollars for the auction.

I remember these very well. We all looked for them. Some got lucky . Most didnt. Thanks

I love looking for the “snow on the roof” error on the 2015 Homestead quarter.

The extra leaf variety may not have been "natural", moat of these coins are very subtle, that's why only those who look close enough eventually find them.